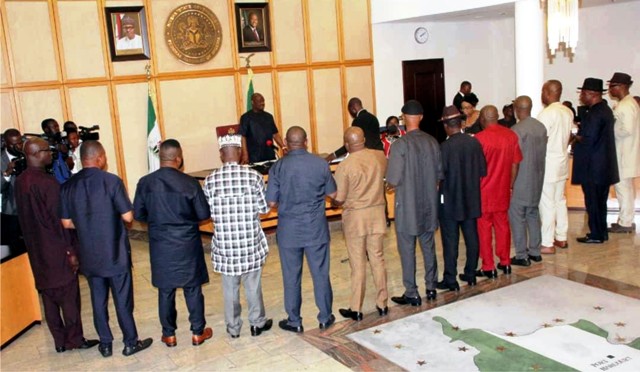 The leadership of the Christian Association of Nigeria (CAN) has warned the President Muhammadu Buhari-led Federal Government against implementation of a directive on alleged recruitment of repentant Boko Haram members.
CAN said it had information that a number of ex-terrorists were allegedly being considered for recruitment into the Nigeria Police and Nigerian Army.
Special Assistant on Media to CAN President, Pastor Adebayo Oladeji, raised the alarm in a statement, yesterday.
He wrote: “CAN is visibly disturbed at reports that the Federal Government has allegedly directed the Nigerian Army and Police to recruit some former members of Boko Haram terrorists who recently underwent deradicalisation programme.
“If it is true, CAN condemns such a policy in strong terms and ask the Federal Government, especially security agencies, to withdraw that directive which is capable of compromising the nation’s security system.”
Meanwhile, the leadership of the Christian Association of Nigeria (CAN) has called on the Federal Government to caution the Adamawa State Government against “hasty implementation” of the death sentence passed on five Christian youth alleged to have killed a Fulani herdsman.
Justice Abdul-Azeez Waziri of a High Court in Adamawa State recently sentenced Alex Amos, Alheri Phanuel, Holy Boniface, Jerry Gideon and Jari Sabagi to death for culpable homicide.
The convicts were alleged to had on June 1, 2017, at Kadamun village in Demsa Local Government Area ‘wilfully and intentionally conspired and attacked three herdsmen rearing cattle, killing one of them, Adamu Buba, whose body they threw into a river and also maimed several cows.’
Special Assistant on media to CAN President, Pastor Adebayo Oladeji, in a statement, yesterday, warned that while CAN was not supporting jungle justice or any criminality, there has been no persecution of perpetrators of the killing of hundreds Christians over the years.
It read: “We note with regret how hundreds of our members in Southern Kaduna, Benue, Taraba, Plateau states in the North-Central geo-political zones, and a state like Enugu in the South, have been killed and are still being killed on a daily basis by some criminals parading themselves as Fulani herdsmen, but are yet to be apprehended.
“While citizens stood helpless at the massacre of their peaceful fellow Nigerians, the international community watched in anguish how government security agencies could not bring perpetrators of these heinous killings to book.
“We recall with sadness how President Donald Trump had expressed sadness over killings of Christians in Nigeria and even told President Muhammadu Buhari when he recently visited the White House in Washington DC that the United States of America would no longer tolerate a situation where Christians are being killed with impunity.
“Despite the outrage that has trailed the killings of Christians in Nigeria, it is disheartening that none of the killers has been brought to justice. We are shocked at the speed of light deployed by security and judicial officers in sentencing the alleged killers of the herdsman in Adamawa State.
“Why did the court discharge the alleged killers of Madam Bridget Agbahime on the orders of the Kano State Government? Why have security officials not arrested those behind the killings of Christians in Southern Kaduna, while those arrested for the murder of Mrs. Eunice Elisha Olawale in Kubwa, Abuja, have been set free by the Nigeria Police?
“In view of the above, we are asking President Muhammadu Buhari to intervene in the death sentence passed on these Christian youths in Adamawa. We have called on our legal team to secure and study the text of the judgment with a view to preventing a miscarriage of justice and a future re-occurrence,” the statement added.
Similarly, the Supreme Council of Bishops, otherwise known as World Council of Bishops, has written President Muhammadu Buhari, pleading for pardon for five young men sentenced to death by a court in Adamawa for the killing of a herdsman.
It would be recalled that a Yola High Court had on June 11, 2018, sentenced the five men from Kodomun in Demsa council area of the state to death by hanging for murdering a herder in retaliation to the several killings in the area.
However, in the letter, the bishops noted that Nigeria “has suffered untold bloodshed from killings, maiming, traumatisation of innocent citizens around the North-East, North Central states, as a result of the frequent attacks by the militia herdsmen times without number.”
The correspondence, titled, “Special request for presidential pardon: Killing by hanging of five young men,” was signed by founding Primate, Abuja, Nigeria, Archbishop P. Sunday; Ecclesiastical Prelate Administrator, Houston, Texas, United State, Archbishop H. Parker; Apostolic Nuncio and Prelate to Africa, Lagos, Nigeria, Bishop J. Onyegbulem; and Ecclesiastical Prelate to West Africa, Niamey, Niger Republic, Bishop J. Hussein.
The clerics regretted that “till date no adequate justice had been meted out on them commensurate to the lives and property lost.”
It therefore “totally condemns and disapproves vehemently the death sentence passed on the five young men last Monday, June 11, 2018 by a court of competent jurisdiction in Yola, Adamawa State, Nigeria accused and charged for killing a herdsman.”
The letter, dated June 13, 2018 from the World Episcopal Headquarters in Texas, U.S., was routed through the Africa Episcopal Headquarters, Lagos and copied the Vice President, Prof Yemi Osinbajo; Senate President, Dr Bukola Saraki; Chief Justice of the Federation, Walter Samuel Onnoghen; Speaker, House of Representatives, Hon Yakubu Dogara; Secretary to the Government of the Federation (SGF), Boss Mustapha; as well as Governor Mohammed Jibrilla and the state’s Attorney General, Silas Bala Sanga.
The bishops added “what our nation Nigeria sues for now in our nascent democracy is peace and tranquillity, and not otherwise.”