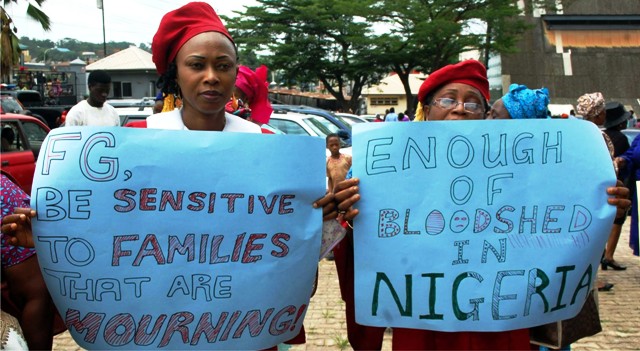 President Muhammadu Buhari has approved the recruitment of 6,000 additional policemen as part of fresh measures to address the nation’s security challenges including the farmers/herdsmen clashes across the country.
The President made this known in a special interview session with Voice of America, Hausa service, in Washington, United States yesterday morning.
President Buhari, who is in the U.S. on the invitation of the American President Donald Trump, revealed that additional security measures were being put in place to check cases of insecurity in Nigeria.
“We will put in place more measures to check insecurity in the country including increasing the number of policemen and train them.
“I have approved the recruitment of 6,000 policemen by the police authorities and I directed that those recruited must come from all the 776 local government areas of the federation.
“Even if it means recruiting one person each from the 776 they should do that instead of going to motor parks, railway stations or market for the recruitment exercise.
“I gave (Police authorities) them this directive,” he said.
The president, who expressed reservation on the call for the establishment of state police as being advocated by state governors, said Nigerians must abide by constitutional provision in regard to the matter.
It would be recalled that the Chairman, Nigeria Governors’ Forum, Governor Abdulaziz Yari, had in February said creation of state police would help in addressing spate of insecurity in the country.
Yari, who is also the Zamfara State Governor, said this at the end of a two-day summit organised by the Senate Ad hoc Committee on Review of Current Security Infrastructure in Nigeria.
He said: “Today we have reiterated the position of Vice President Yemi Osinbajo.
“And the position of the security summit we held in August, that there is a need for the state police; we can say it is the only answer.”
However, President Buhari maintained that the creation of state police would not augur well for the finances of the states, adding that some of them were finding it difficult to meet their financial obligations to workers and other state needs.
“We must carefully look at the position of the nation’s constitution on the issue of state police before we take final decision on the matter if the constitution allows state police so be it.
“But don’t forget that many times the Federal Government gave out what we referred to as bail out to state governments for payment of workers’ salaries. How many states can pay salary promptly? and you want to add more financial burden to the states.
“It is not proper to employ a person, train him on how to handle weapons and then refuse to pay him – you can imagine what would happen in such situation,” he said.
On his purported comment on youth while in London, President Buhari dismissed the report, saying that the media only preferred to interpret and report what they like instead of concentrating on developmental journalism.
He said: “You know Nigeria’s population is now between 180 and 190 million and 60 per cent of this population is youth that is 30 years down ward.
“You know in the North most youths are uneducated or school dropouts. If not because we had good harvests in the last two farming seasons the situation would have been deteriorated.
“These youths even if they travel out of the North for greener pasture they hardly make it economically because what they earn as income cannot afford them to meet their basic needs or return home,” he said.
“All these explanations I made, they refused to highlight them in their report and you know the media in Nigeria in most cases only do what they like.
“For instance the nation’s achievements in the agricultural sector where millions of Nigerians benefitted financially were left unreported by the media.
“Even when the Minister of Information and Culture wanted to reply that abusive letter written by former President Olusegun Obasanjo, I had wanted Lai not to reply the letter but I said I should allow him to highlight the achievements of our administration.”
President Buhari also used the opportunity to debunk the insinuation that Christians were being killed by herdsmen.
He said that clashes between farmers and herdsmen had been in existence for the past years, saying that Nigerian herdsmen were not in the habit of carrying dangerous weapons while moving their animals around the country.
On what he does during his leisure time, President Buhari said he hardly listened to music but rather always obeyed his doctors’ advice on the need to eat and have enough rest.(NAN)