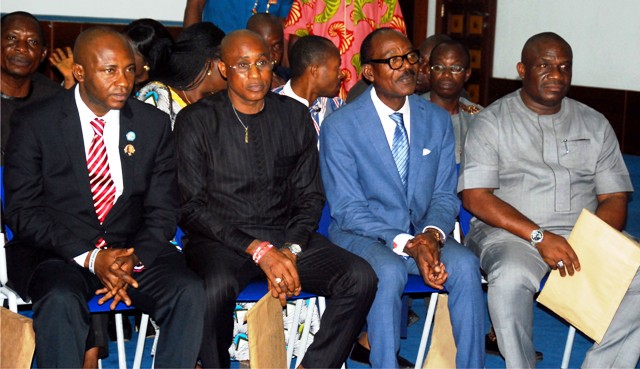 The National Chairman of the Peoples Democratic Party (PDP), Prince Uche Secondus says the era of impunity and imposition of candidates in the party has ended.
Secondus said this in Udi, Enugu State last Saturday during a rally organised by members of the party in Enugu West Senatorial Zone of the state.
The chairman, who was represented by the Deputy National Chairman, North, Sen. Babaya Garba said that the party was determined and poised to reenact its glorious days.
He said that aspirants in the party would henceforth be provided the level playing ground to thrive.
Secondus said that feelers across the country showed that Nigerians needed the party back to power, adding that their performances during their time were outstanding.
He, however, said that for the party to thrive, it needed to show character and good leadership in the states under its control as was witnessed in Enugu State.
“We are determined to reenact the glorious days and achieve greater heights. To achieve this, we need to provide level playing ground for aspirants.
“There will no longer be impunity and imposition of candidates in our party,” he said.
Secondus said that the National Working Committee (NWC) of the party was happy with the quality of leadership shown by Gov. Ifeanyi Ugwuanyi.
“Enugu State deserves to be emulated because there is absolute peace here. We are happy with the unity between the two leaders of our party in the state: Ugwuanyi and Sen. Ike Ekweremadu.
“The NWC of the party is proud of you,” Secondus said.
In his speech, the Deputy Senate President, Dr Ike Ekweremadu, said that the leadership style of the governor had ushered permanent peace in the state.
Ekweremadu said that the PDP in the state had its fair share of crisis and trying moments which threatened to sink the party.
He mentioned 1998, 2002, 2004, 2006 and 2008 as the years the party in the state had its greatest challenges as its chieftains were engaged in supremacy battle.
He said that this was the first time the party in the state had peace at the eve of an election year.
“I have been involved in politics of the state since 1998 and there have always been problems.
“In 2002 we had a crisis that almost consumed everybody while 2006 was crisis of succession.
“In 2008 and 2014, the state was divided between Abuja politicians and their home based counterparts but we survived it.
“Today, we have a governor that has brought permanent peace and that is why we are celebrating,” he said.
The deputy senate president said that the state was one of the best places to live in the country due to the prevailing security and peace.
Ekweremadu said that residents of the state would show their gratitude to the governor in the coming general election.
Responding, Ugwuanyi said that he was overwhelmed by the outpour of emotions and eloquent testimonies about his administration.
The governor commended members of the party from the zone for their show of love and support.
He assured them of continued provision of good and quality leadership as well as lead with the fear of God.