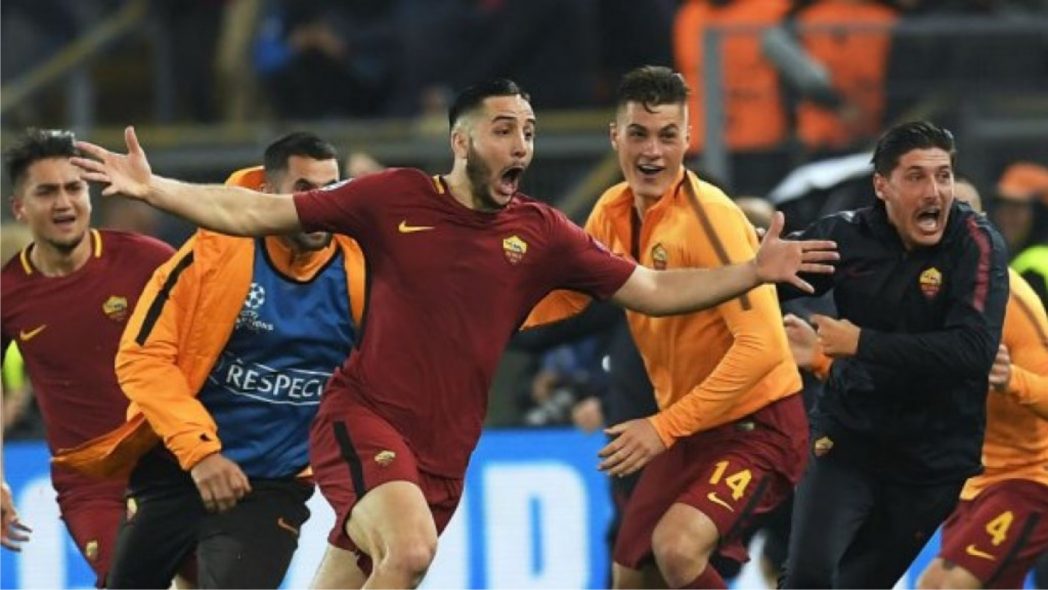 Kostas Manolas sent Roma through to the semi-finals of the Champions League after an incredible 3-0 victory over Barcelona at the Stadio Olimpico yesterday saw them overhaul a 4-1 first-leg deficit and advance on away goals.
The superb Edin Dzeko set the ball rolling in the sixth minute, and Daniele De Rossi converted a penalty 13 minutes after the break to get the home fans believing, Manolas glanced home a brilliant header with eight minutes left to send the Roma supporters into raptures and leave Barca wondering what had hit them.
Just as they were at the Camp Nou, Roma were aggressive from the off, and Dzeko gave the home side a deserved lead after just six minutes, brilliantly bringing down De Rossi’s clipped through ball, holding off Samuel Umtiti and poking the ball past Marc-Andre terStegen.
Patrik Schick had the best chances to double Roma’s lead before half-time on his Champions League debut, but continued the poor form in front of goal that has blighted his club-record move from Sampdoria.
He sent two glorious headed chances wide, the first from a vicious 13th-minute AleksandarKolarov corner.
The second, just before the half-hour mark was even more glaring, a free header on the penalty spot that should have hit the target.
He was however unlucky not to control RadjaNainggolan’s mishit shot when it flashed to him in the area just two minutes later.
Roma started the second half as they started the first and got their reward in the 58th minute when EdinDzeko was chopped down by Gerard Pique and De Rossi slotted home the spot-kick.
Eusebio Di Francesco’s side smelled blood, and with the raucous crowd urging their team they tore into wobbling Barca.
Meanwhile, Mohamed Salah ensured Liverpool’s return to the Champions League semi-finals for the first time in a decade as a 2-1 win at the Etihad Stadium yesterday took them through 5-1 on aggregate and ended Manchester City’s European dream for another season.
On a night of high frustration for free-spending City, manager Pep Guardiola was sent off at half-time for taking his furious protests towards Spanish referee Antonio MateuLahoz too far.
City led the quarter-final, second leg 1-0 on the night at that stage after Gabriel Jesus’s second-minute opener, but the hosts felt aggrieved after Leroy Sane had a second goal wrongly disallowed just before the break.

Enyimba Secures Away Point In Kwara

S’Eagles Can Cause Upsets In Russia