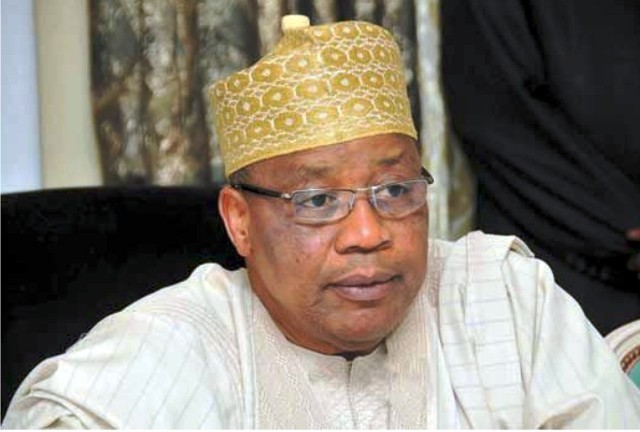 Former military Head of State, Gen Ibrahim Babangida (rtd), ex-Presidents Goodluck Jonathan, Alhaji Shehu Shagari and Chief Ernest Shonekan, were conspicuously absent at yesterday’s Council of States meeting at the Presidential Villa, Abuja.
This is as the Senate President Bukola Saraki was hailed on arrival by the Sokoto State Governor, Alhaji Aminu Tambuwal as he sauntered into the venue of the meeting.
As at the time the meeting started few minutes after 11am before journalists left the venue, only three former Presidents, Chief Olusegun Obasanjo, retired Generals Yakubu Gowon and Abdulsalami Abubakar were at the venue alongside President Muhammadu Buhari.
Former President Olusegun Obasanjo arrived after the national anthem and the opening prayers were said.
The meeting was the third Council of States meeting held under the democratic administration of President Buhari.
The Council of States meeting is always attended by former Presidents or Head of States, serving and former Chief Justices of Nigeria (CJNs), serving Senate President and Speaker, House of Representatives as well as State Governors.
Aside President Buhari and the three other past presidents, the Vice President, Prof Yemi Osinbajo, Senate President, Bukola Saraki and four former Chief Justices of Nigeria were seated at the Council Chamber, the venue.
The past four CJNs present were Idris Kutigi, Alfa Balgore, Mariam Aloma Muktar and Mohammed Uwais, while the serving CJN, Walter Onnoghen was absent, though unconfirmed report has it that the serving CJN was not a member of the Council of States.
Also absent as at the commencement of the meeting was the Speaker of the House of Representatives, Hon Yakubu Dogara.
Others also present at the meeting included state Governors of Adamawa, Benue, Kebbi, Jigawa, Delta, Lagos, Nasarawa, Abia, Sokoto, Imo, Bauchi, Akwa Ibom, Kano, Plateau, Ogun, Rivers, Zamfara, Ebonyi, Kaduna.
The meeting started when President Muhammadu Buhari arrived the Council Chamber, venue of the meeting, and went round to shake hands with those present.
The first meeting under Buhari was held on October 21, 2015, while the second was held in September, 2016.
The National Council of State is chaired by President Muhammadu Buhari, with Vice-President Yemi Osinbajo as deputy chairman.
The opening prayers were said by Gowon and Uwais, respectively.
The meeting focused on issues of insecurity in the country as well as the coming elections in 2019.
Officials from Independent Electoral Commission (INEC) also attended to brief the council on preparations ahead for the 2019 elections.
Obasanjo, who was five minutes late, rushed when a minute silence was being observed in honour of the late former Chief Justice of Nigeria, Justice Dahiru Musdapher.
He then went straight to shake hands with Buhari, Senate President, Bukola Saraki and Abdulsalami Abubakar, before taking his seat.
The deputy governors of Bayelsa and Enugu also attended the meeting.
The Council of State is an organ of the Federal Government saddled with the responsibility of advising the executive on policy making.
Its duties include advising the president in the exercise of his powers with respect to the National population census and compilation, publication and keeping of records and other information concerning the same; prerogative of mercy; award of national honours; the Independent National Electoral Commission (including the appointment of members of that Commission); the National Judicial Council (including the appointment of the members, other than ex-officio members of that Council); the National Population Commission (including the appointment of members of that Commission).
The council also advises the president whenever requested to do so on the maintenance of public order and on such other matters as the he may direct.
It was gathered that the hailing of the Senate President, Dr. Bukola Saraki by the Sokoto State governor may not be unconnected with the recent removal of the Chairman of Northern Governors’ Forum, Senator Abdullahi Adamu, last Wednesday, by majority of senators from the North, and his replacement with Senator Aliyu Wammako, former governor of Sokoto State.