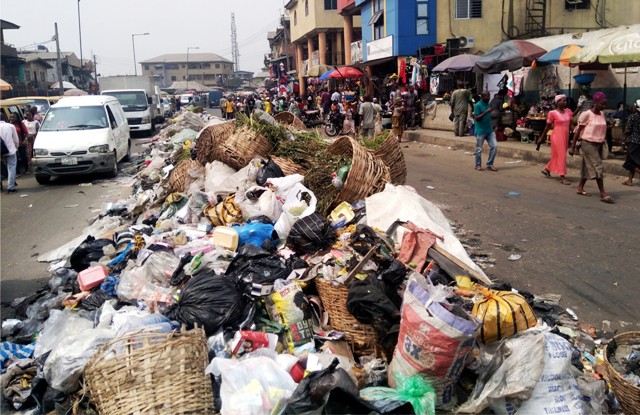 The media, particularly, the electronic media last week was abuzz with news of complaints of flooding by some residents of Port Harcourt and its environs over last Sunday’s heavy rainfall.
Information available to The Tide revealed that complaints were coming from areas that experienced severe flooding last year.
These areas include Eneka, Elekahia, parts of D-line and Eliozu. The rest are Mile I Market, Rukpakulus, Eliozu, and Igboh Etche, amongst others.
However, as the rainy season approaches, residents of these areas and other parts of Port Harcourt are already jittery over the imminent severe flooding that maybe experienced in the city this year.
A cross section of respondents who expressed their concern in an interview with The Tide, contended that if urgent attention is not given to the issue, the state may experience severe flooding this year.
They however commended the Rivers State Government for the several flood control measures taken so far, since last year, including the dredging of major water channels. They stressed the need for the government to work with community leaders to stop people from building on water right of ways.
The Chairman, Health Safety and Environment (HSE), Chinwo Town, Port Harcourt City Local Government Council, Prince William Chinwo stressed the need for the government to widen drainages located in high density areas of the city to ensure easy flow of water.
Chinwo also stressed the need for wider drainages for new road networks while government should continue with its on-going desilting programme of major creeks and canals across the city.
He also called for sanctions against those dumping refuse into drainages and creeks, stressing that until people are arrested and punished, the situation will not stop.
Also speaking, Mr. Felix Godwin, a trader at the Mile I Market, stressed the need for more sensitisation programmes to create awareness on the dangers of dumping refuse into drainages as well as building on water right of ways.
Godwin also stressed the need for the government to check the incessant flow of water from Sangana Street and Dline to the Mile I market.
“If the government can control the flooding on the major roads and streets, this place will be okay for us, because the water always flows from Sangana and Dline side to the market,” he said.
Also speaking, a resident of D-line, Mr. Chukwudi Kelvin said that residents of D-line especially Sangana Street should be blamed for the incessant flooding of the area.
“I think, the government doesn’t have much to do, because most of the problem, is being caused by the people.
“You know that some people use to throw their refuse into the gutters especially whenever it rains. If the government can set up an agency to watch and punish people, the situation will stop,” he said.
Mr. Kelvin who volunteered to assist the government with information on those dumping refuse into the drainage, said that the situation must be checked before the incident of last year repeats itself.
He complained that last year, he lost all his belongings to flooding and prays the incident does not repeat this year.
“Last year, when the flooding came, I lost everything. I also left my house because the water level was almost at my chest.” “If not that I have renewed my rent for this year, I would have packed out of this place,” he said.
Meanwhile, Environmentalists have blamed the incessant flooding in the city on the poor environmental attitude of the people.
An Environmentalist, Mr. Thomas Ikarabu told The Tide in an interview that despite the effort of the State Government to ensure the free flow of water from the city to the rivers, most people are busy erecting structures on water right of ways.
Mr. Ikarabu also condemned the indiscriminate dumping of wastes into the Ntawogba and other creeks in the city and called for severe sanctions.
Meanwhile, Rivers State Government has promised to step up its sensitisation campaign against the indiscriminate dumping of refuse into drainages and canals.
The commissioner for Environment, Professor Roseline Konya, said in a telephone interview with The Tide that effort would be made to stop people from indiscriminately dumping refuse into drainages. Professor Konya said that people must support the government to check flooding this year in the city by avoiding habits that lead to flooding.
It would be noted that the present administration under Governor Ezenwo Nyesom Wike has shown much concern towards checking flooding in the city of Port Harcourt and environs.
The ongoing dredging of the Ntawogba creek is one of the several measures taken by the government to check flooding in the city.
However, as the rainy season approaches, it behoves on the people to assist the government control flooding in the city by checking the dumping of wastes into drainages.