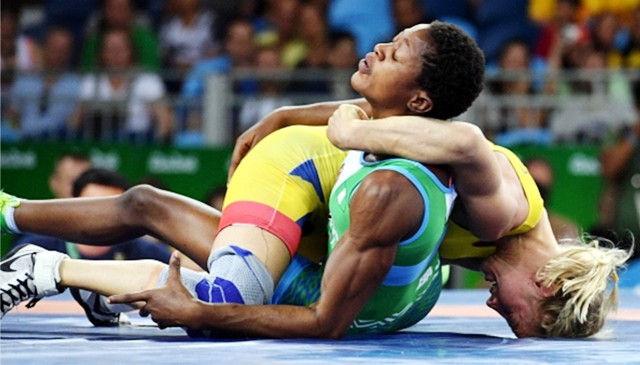 As at press time yesterday, an unofficial medals table shows that team Nigeria and Morocco shared leadership of the Africa Wrestling Championship, held at Alfred Diete-Spiff Sports Complex, Moscow Road, Port Harcourt.
Kenya, South Africa and Egypt have nine and six medals respectively.
The one week event which ended last night saw huge crowd and successful.
Meanwhile, Rivers State Commissioner for Sports, Hon Boma Iyaye has commended Nigerians and the people of the state for their huge turnout at the Africa Wrestling Championship (AWC).
Iyaye said this while briefing sports journalists at the Alfred Diete-Spiff Sports Complex, Port Harcourt at the weekend.
“I am very proud of what I saw, the turnout is massive, Rivers State has left a legacy behind for hosting the AWC”, Iyaye said.
“He explained that, the world has seen the rich culture of the state, saying the united world wrestling has requested for the cultural groups in their next tournament.
Iyaye who is also the chairman of Local Organising Committee (LOC) stated that, when youths are engaged in sports, there will be no crimininatly on the streel, adding that boxing is one of the sports that they will focus on after now.
“We are going back to grassroots because there are a lot of talented youths that will be useful in different sports”, Iyaye said.
He admitted that there are owe or little errors but the championship has been a great success.
According to him, the state is ready to host any international competition because the facilities are there, saying the AWC has boosted the state economy.
The commissioner urged private individual and corporate bodies to be involved in sports development in the country, adding that sports development should not be left for government alone.
He noted that wrestling is beyond the traditional wrestling it used to be in those days and lauded Bayelsa State for their commitment in wrestling.
The LOC chairman also used the forum to call on other state commissioner to invest in wrestling.

Ahly’s Ghaly To Retire In May