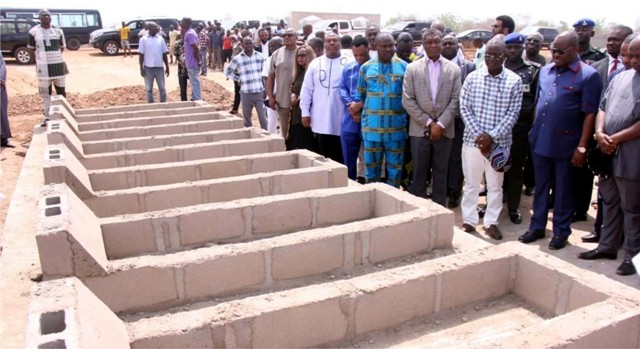 The Rivers State Governor, Chief Nyesom Wike has called for immediate and comprehensive measures to resolve the unfortunate killing of Benue people by Fulani herdsmen.
The governor donated N200million to the Benue State Government for the purchase of relief materials and medicines for the displaced persons.
Wike declared that it was no longer fashionable to trade blames while innocent people were killed by armed gangs.
Wike spoke at the Peoples’ House in Makurdi, last Wednesday, after he led a delegation of Rivers Elders on a condolence visit to Benue State in honour of those killed by Fulani herdsmen earlier this year in the state.
Wike and Benue State Governor, Samuel Ortom led other leaders to offer prayers at the graveside of the 73 Benue people murdered in cold blood.
He said: “What has happened in Benue State has affected me. I am pained. Look at deaths everywhere. Nobody is free again.
“People don’t understand the magnitude of the injury inflicted on the people of Benue State. The country must sit down to proffer solutions to this menace”.
The governor said the conflict that affects a component state affects the entire country as it dislodges the security system.
“There is no way anybody can justify these killings. There is no justification whatsoever. The people of Benue State must rally round their governor at this point”, he said.
The governor added: “When you have a brother who has problems, you associate with him. Time has come when we must rise above party lines and tackle our problems”.
Wike said as Christians, Rivers people respect the sanctity of human lives, hence the visit to Benue State.
He urged the Benue people to be vigilant at all times and employ techniques of self-defence to protect themselves from unprovoked attacks.
At the graveside of the slain 73 persons, Senator George Sekibo offered prayers for the repose of their souls.
In his remarks, Benue State Governor, Samuel Ortom said that 100,000 persons have been displaced by the invasion of Fulani herdsmen.
Ortom said that Benue State was also battling with the influx of displaced persons from Cameroun.
The Benue State governor regretted that rather than resolve the security challenges facing the state, the Inspector General of Police, Ibrahim Idris has become a spokesman for the Fulani herdsmen.
The killers of Benue people are known to the security agencies. He said the people of Benue State will continue to seek for justice until the leaders of Miyetti Cattle Breeders are arrested.
Ortom thanked the government and people of Rivers State for the donation, saying that they have acted as true brothers.
The Benue State governor added that the graveyard for the 73 persons was set up as a memorial for those killed by Fulani herdsmen.
Wike was accompanied by former Rivers State Governor, Sir Celestine Omehia, Senator George Sekibo, Senator Olaka Nwogu, former Minister of Sports, Dr Tammy Danagogo, former Minister of Transport, Dr Abiye Sekibo, Chairman of Greater Port Harcourt City Development Authority, Chief Ferdinand Anabrabra, former National President of NBA, Chief Onueze Okocha, Prince Emma Anyanwu and former Attorney General of Rivers State, Hon Frank Owhor.
Meanwhile, the leadership of the Peoples Democratic Party (PDP) has commended the Rivers State Governor Nyesom Wike and his Ekiti State counterpart, Ayo Fayose, for visiting Benue state and extending assistance to victims of the recent violent attacks and other internally displaced persons in the state.
The party leadership, which had earlier visited Benue State in the wake of the attacks, said the gesture by the two governors at a time the Presidency and governors elected on the platform of the All Progressives Congress (APC) turned a blind eye to the sufferings of the victims, underlines PDP’s commitment to the wellbeing of all Nigerians in line with its ideology.
National Publicity Secretary of the party, Kola Ologbondiyan, in a statement yesterday, said it is disheartening that the Presidency had refused to visit Benue State recalling that when the APC governors visited, after much entreaties, they failed to show any form of empathy to the victims.
The party said that instead of APC empathizing with the people and ensuring that perpetrators of the attacks were brought to book, “ the party leaders have shown more concern for their selfish political interests across the nation.”
“I charge the federal government to stop ruling Nigeria with a double standard. Killing innocent souls, sacking their communities is nothing but terrorism. The Nigerian constitution has given you the powers to make law. You have made the anti-open grazing law, stand by it. The law must not be compromised or aborted.”
Governor Fayose also charged his Benue State counterpart to reconsider his affiliation to the ruling party saying, “if the vehicle you are using can no lower carry you, change that vehicle.”
Responding, Governor Ortom, while thanking his Ekiti State counterpart and his entourage for the visit, regretted that the authorities did not heed his earlier alerts from Benue which could have saved those who were killed in the attacks.
In the words of Governor Ortom, “Yes, we are mourning, we are grieved by the actions of these killers but if those who are responsible for providing security had heeded our alarm, those people may not have been killed.

Nigeria Under Siege, Catholic Bishops Tell Buhari …Say APC Govt Has Failed …It’s Dishonest To Say I am Doing Nothing About Killings -Buhari