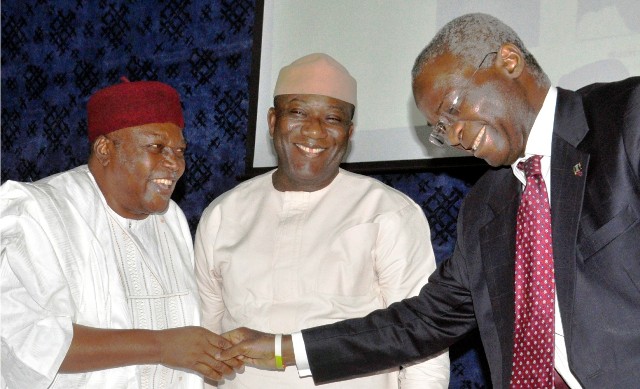 Borno
The Nigeria Security and Civil Defence Corps (NSCDC) says it has arrested a 24-year-old tricylist, Isah Ma’azu for allegedly snatching 15 cell phones from housewives in Maiduguri. The Commandant of the Corps, Ibrahim Abdullahi disclosed this in an interview with newsmen  in Maiduguri.
Abdullahi said that the suspect was apprehended by members of the Civilian Joint Task Force (CJTF) and handed over to the Corps.
He said the suspect had swindled 15 cellphones and other valuable items from married women in the metropolis.
He explained that the suspect was disguising as an errand boy and going to the victims’ matrimonial homes under the pretext of delivering shopping or food items from their husbands.

FCT
The Acting Chairman of Economic and Financial Crimes Commission (EFCC), Mr Ibrahim Magu will speak at the Association of Local Governments of Nigeria’s maiden anti-corruption workshop scheduled for November.
A statement by ALGON last Tuesday in Abuja said that former Secretary-General of Catholic Secretariat of Nigeria, Rev. Fr. George Ehusani would also speak at the occasion.
The statement signed by the Chairman, Board of Trustees (BOT) of ALGON, Mr Odunayo Ategbero  said that the workshop would hold from November 9 to November 10 at the Shehu Musa Yar’adua Centre, Abuja. Ategbero said that Magu would take the anti-corruption awareness to the grassroots as he would speak to principal operators of the 774 local governments of the federation.

Kebbi
The National Emergency Management Agency (NEMA) says it has provided relief assistance to the recent Kebbi State flood victims. It could be recalled that about 100 households were affected by the flood in Dole-Kaina area of Dandi Local Government Area of the state sometime in September.
The Director-in-charge of Search and Rescue, Air Commodore Paul Ohenmu who presented the relief materials to the victims in Birnin Kebbi last Tuesday, said the assistance was meant to alleviate their sufferings.
“This is just a token to alleviate your suffering; we know that it will not be enough to take care of the disaster, but just for you to know that the Federal Government sympathises with you,” Ohenmu said.

Kogi
The Kogi State Government has described as false, rumours that some unidentified men are infecting children with monkey pox virus in schools in the guise of vaccination.
The Commissioner for Health, Dr Saka Audu in a statement by his media aide, Mr Audu Haruna last Tuesday in Lokoja said that government had investigated the claim and found that it was untrue.
According to him, “the rumour is baseless and unfounded, as it is similar to the rumour that gripped Abia, Enugu and Imo a few days back.’’
“The only parts of Kogi where we have an ongoing vaccination exercise is in Yagba West, which will soon be extended to two contiguous wards in Yagba East Local Government Area.

Kwara
A Librarian in the Kwara State Library, Mr Yisa Eleshinnla has urged the State Government to restore the electronic library (e-library) in the library.
Eleshinnla told newsmen  in Ilorin last Tuesday that the state e-library had been down for the past seven years and pleaded for its resuscitation. According to him, e-library is needed to enhance students’ performance in their academic fields of study, especially at this present computer age.
government has included the innovation project of the library in the state budget. He attributed the non-functioning of the e-library to mismanagement of facilities and equipment. “But, we have written a lot of memos to the government on this e-library project, but there has not been any positive response.
“E-library has to do with laptops, Internet and stable electricity, but they are all not working”, Yisa said.

Lagos
A creative expert, Temitope Olagbegi has identified too much concentration on politics and entertainment as major factors distracting youths from academic pursuit.
Olagbegi, the Creative Director, Sixth Sense, Lagos, in an interview with newsmen  in Lagos said “it has negative impact on their intellectual development’’.
She spoke on the sidelines of the Guardian of Hope (GOH) Foundation Excellence Award for Medical and Surgery Emergency Workers of the Lagos State Teaching Hospital (LASUTH), Ikeja. According to her, the over-concentration is luring more youths to the “Get Rich Quick Syndrome’’, which most youths are now embracing in to the detriment of their integrity and diligence.

Nasarawa
A first class traditional ruler in Nasarawa State, Dr Ayuba Audu has advised parents against early marriage of their female children to enable them acquire quality education. Audu, the Zhe Migili of Migili nation, Nasarawa State gave the advice last Tuesday in an interview with newsmen in Jenkwe, Jenkwe Development Area of the state.
He appealed to parents and guardians to strive to provide high-quality education for their female wards for the overall development of the country. The Zhe Migili cited the example of Prof. Dinatu Iwala of Nasarawa State University, Keffi, who became the first female professor of the Migili people to buttress his position.

Niger
The Niger State Child Rights Protection Agency has announced the arrest of  eight persons suspected of raping four girls in Minna. The Director-General of the Agency, Mrs Mairam Kolo, told journalists last Tuesday that the victims were teenagers hawking wares on the street.
She gave the names of the suspects as : Yahaya Yakuso (50) Yusuf Idris (35) Tukur Buhari ( 35) Mohammed Yusuf, (25) Musa Ibrahim (35) Nasir Abubakar (35) Isah Garba (29) and Ibrahim (30). According to her, the suspects were arrested following series of surveillance by the agency’s  officials and tip off from other stakeholders that a gang of rapists were sexually abusing the girls.

Ogun
The Chancellor of Covenant University, Ota, Dr David Oyedepo  has advised tertiary institutions to train thinkable leaders that would provide immediate solutions to the nation’s current challenges. He said that these leaders must “first turn themselves into critical thinkers to reproduce young scholars that will sustain that thinking culture.”
Oyedepo gave the advice at the 54th Meeting of Committee of Deans of Postgraduate Schools (CDPGS) in Nigerian Universities held in his institution last Tuesday.

Ondo
The 32 Artillery Brigade of the Nigerian Army, Akure has debunked rumours of harmful vaccination being conducted by some people believed to be soldiers in Ondo State.
There was pandemonium in primary and secondary schools in the state which made parents and guardians to withdraw their children and wards, when rumours filtered in that harmful vaccination was being administered on children.
The Brigade’s Spokesperson, Major Ojo Adenegan said this in a statement issued last Tuesday in Akure.
”The attention of 32 Artillery Brigade, Akure has been drawn to the fake information making rounds in Ondo State that soldiers are administering poisonous vaccine on pupils and students of primary and secondary schools in the state,” Adenegan said.

Plateau
The Christian Association of Nigeria (CAN), Plateau State chapter  has decried the lack of unity among Christians, and declared that the travails of the faithful would only worsen if the Church remained divided.
“The Church today is faced with a lot of problems, but the major one is lack of unity. The challenges are massive; we can only tackle them if we are united and speak with one voice,” Dr. Soja Bewarang, its Chairman, said on Tuesday.
Bewarang spoke at the 2017 Unity Service and Prayer, organised for Christians in the Central Senatorial Zone of the state, and held in Bokkos.
The service, an annual event held in the three senatorial zones of Plateau, is targeted at bringing all Christians together to encourage them to pray for peace, progress and tranquility.

Sokoto
The outgoing UNICEF’s Chief of Field Office for Sokoto, Zamfara and Kebbi States, Mohammed Muhuiddin says that there is over 50 per cent decrease in number of out-of-school children in Sokoto State. Muhuiddin made the disclosure last Tuesday at a reception organised in his honour by the Sokoto State Government after the completion of his tour of duty. He said that the number of out-of-school children in Sokoto State which he noted was the highest in the country, had dropped from 69 per cent in 2015 to 37 per cent in 2017.
“The Multiple Indicator Cluster Survey (MICS) for 2016 to 2017 showed that Sokoto State has made appreciable progress, resulting in over 50 per cent cut in the number of out-of-school children.
“It gladdens my heart, seeing the commitment shown by the political leadership and the technical teams set up by the government to work with UNICEF and partner with various sectors for the children of the state”, he said.