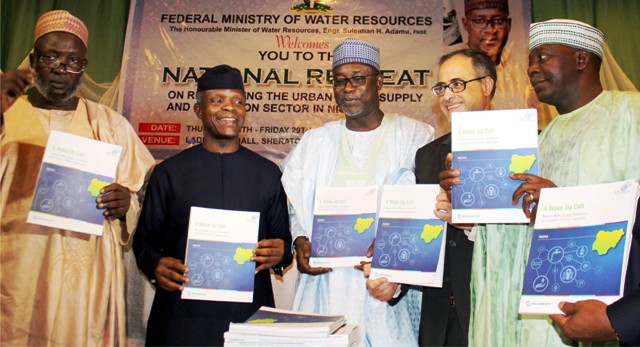 Adamawa
The Commanast of Royal Jordnian Air Force (RIAF), Maj.-Gen. Yousef Al-Hnaity last Tuesday said he was impressed with Nigerian Air Force’s commitment to contain the Boko Haram insurgents in North East.
He gave the commendation in an interview with newsmen in Yola where he accompanied the Chief of Air Staff, Air Marshal Sadique Abubakar to inspect facilities at Yola Base of NAF which also housed the headquarters of the Air Component of “Operation  Lafiya Dole”.
The RJAF chief said “NAF has what it takes both in manpower and facility to check the activities of insurgents.
“I am very happy to be here. What I saw here today actually impressed me and I am delighted”.

Borno
The United States Agency for International Development (USAID) says it have trained 7,169 teachers in Borno State to instigate the shortages of teachers caused by the Boko Haram insurgency in the state.
The Special Adviser to Governor Kashim Shettima on Communication and Media Strategy, Malam Isa Gusau made this known as a statement last Saturday in Maiduguri.
Gusau said that the figure was disclosed when the Director of the USAID’s Educaiton Crisis Response Project (ECR), Mr Ayo Oladini, paid a courtesy  visit to the governor in Maiduguri.
He said that the training was provided sequel to the advocacy by Shettima to encourage support toward rebuilding and rehabilitation of the education sector ravaged by the insurgency.

Jigawa
The Jigawa State Police Command has arrested three suspected armed robbers who had been terrorising the residents of Kazaure Local Government Area of the state.
The command’s spokesman, SP. Abdu Jinjiri who paraded the suspects before newsmen in Dutse last Wednesday said the suspects were arrested along Kazaure-Daura road.
Jinjiri said that they were apprehended after they had blocked the road and robbed motorists of their money and other valuables.
He explained that the suspects hailed from Kusada, Kankiya and Malumfashi Local Government Areas of Katsina State.
“On September 22, our officers in Kazaure Local Government area received a distress call that there were some armed robbers who blocked the Kazaure-Daura road and were robbing motorists”, he said.

Kaduna
The Chief of Air Staff, Air Marshal Sadique Abubakar says discipline is the bedrock of a fighting force without which there can be no cohesion and team spirit.
Abubakar made this assertion at the graduation of Young Officers Course 10 held at the Military Training Centre in Kaduna.
Represented by AVM Muhammad Abdul-Wahab, NAF Secretary, Abubakar charged the 25 young officers to uphold high standard of discipline and loyalty that the service was known for.
“To whom much is given, much more is expected. You have been equipped both in character and skills for the duties ahead of you.
“You must, therefore, justify the resources that have been invested in you by doing your duties diligently and professionally at all times”, he said.

Kano
The Kano State Police Command says it has nabbed 10 suspected armed robbers who have been terrorising Kano residents.
The command’s spokesman, DSP. Magaji Majiya made this known in a statement in Kano last Wednesday.
Majiya said the suspects were arrested in different parts of the metropolis by the State Anti-Robbery Squad (SARS) within the last one month.
He said two of the suspects were arrested on August 19 for conspiring with two others now at large to rape a female resident of Hotoro Quarters and robbed the victim of some items.
Majiya listed the areas where the suspects were arrested to include Hotoro Quarters, Dorayi Babba, Emir’s Palace Road around central prison and Rijiyar Zaki, among other.

Kogi
The organised labour in Kogi State has appealed to the Federal Government to direct relevant humanitarian agencies to send relief materials to the state to assuage the plight of the state government workers on strike.
Olakunle Faniyi, Kolawole James and Isah Abubakar, all Secretaries of the Nigeria Labour Congress (NLC), Trade Union Congress (TUC)  and Joint Public Service Negotiating Council (JPSNC)  respectively made the appeal in a statement.
They made the statement available to journalists in Lokoja.
They said the appeal became necessary because the situation of workers in the state had become worse, compared to the condition of Internally Displaced Persons (idps) in various camps.

Lagos
Candidates of the Peoples Democratic Party (PDP) Candidate for Saturday’s  Eti-Osa Constituency I bye-election in Lagos State, Mr Arobiewe Abogun has lauded the Independent National Electoral Commission (INEC) for peaceful conduct of the exercise.
Abogun told newsmen at the conclusion of voting in his Igbo-Efon Community that the election was ‘reasonably peaceful’.
He said that although he heard of some disturbances in some areas, such cases were isolated.
Abogun said that an election should not be a do-or -die affair, promising to accept the outcome of the election.
“In my domain here, the conduct of the exercise was peaceful and credible, and it is fair. I commend INEC and everybody for that”, Abegun said.

Nasarawa
A Non-Governmental Organisation (NGO), Beautiful Gate Handicap Centre has donated tricycles to 45 persons living with disabilities in Nasarawa State.
The founder of the organisaiton, Mr. Reim Rise presented the tricycles to the beneficiaries last Friday in Obi, Obi Local Government Area (LGA) of the state.
Rise said the gesture was part of the organisation’s contributions toward the alleviation of the suffering of the physically challenged in the state.
He said that the tricycles would assist the beneficiaries to move from one place to another.

Niger
The Nigeria Security and Civil Defence Corps (NSCDC), Niger State Command last Friday said it had deployed 2,500 security personnel to provide security during the nation’s 57th Independence celebrations in the state.
The commandant of the corps, Mr Philip Ayuba disclosed this in an interview with newsmen in Minna.
Ayuba said that already plain cloth security personnel had been deployed to Minna, Suleja, Kontagora and Bida to beef up security ahead of the celebrations.
He said that the command was collaborating with sister security agencies and relevant stakeholders to ensure peaceful atmosphere before, during and after the festivities.

Oyo
Justice Joyce Abumaleek of the Federal High Court, Ibadan has dismissed  the  application asking the court to decline jurisdiction   filed by one Festus Adeyemi in the N8  billion CBN currency scam suit.
Citing various aspects of the law, Abdumaleek said that the court had been fully empowered by the Administration of  Criminal Justice Act (ACJA), the EFCC Act and the Nigerian constitution  to entertain cases like this.
“ It is not an abuse of court process for the EFCC to go ahead with this case and this court has jurisdiction to entertain the matter.
“The application asking this court to decline jurisdiction is hereby dismissed,” the judge ruled.
Abdulmaleek adjourned the case till October 25 for further trial.
our correspondent reports that Adeyemi, the fifth accused person,  had through his counsel, Mr Babatunde Akinola,  asked the court to decline jurisdiction on the matter.

Plateua
The Minister of Sports and Youth Development, Solomon Dalung has called for radical reform in the Nigerian criminal justice system.
Dalung made the call last Saturday in Jos when he celebrated his 54th birthday with inmates of the Prison Command in Jos.
The minister said the call became necessary to strengthen criminal justice and ensure justice to all accused.
“There is need for radical reforms in our criminal justice delivery system.
“You cannot keep somebody in prison for years without trial and at the end of the day, do justice to the person.
“There is urgent need for speedy dispensation of cases in our courts, for justice to be done,” he said.
Dalung, a former prison officer, advised prison inmates to be of good behaviour when they eventually gain their freedom.

Taraba
The Chairman, Presidential Committee on North East Initiative (PCNI), Retired Lt.-Gen. Theophilus Danjuma, has   urged the people of Mambilla Plateau in Taraba State to eschew violence and build peace to foster development.
Danjuma made the call at a Peace Building Town Hall meeting organised by Institute for Peace and Conflict Resolution (IPCR) in partnership with UN High Commissioner for Refugee (UNHCR) in collaboration with PCNI in Gembu, Taraba State.
The PCNI chairman cautioned that the resuscitation of the Mambilla Hydro-Power project by President Muhammadu Buhari would be stalled if the people failed to build peace.
Represented by Brig.-Gen Habila Vintenaba, the Chairman, Security sub-committee of PCNI, Danjuma appealed to the various ethnic groups on the plateau to give peace a chance to enable government to execute the hydro power project for economic development of the country.