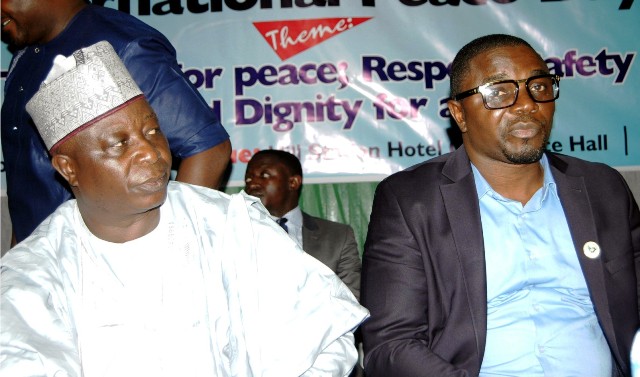 Adamawa
The Igbo community in Adamawa State says agitations for Biafra Republic is unnecessary.
The leader of the community in the state Chief Godwin Onemaka, said this in an interview with newsmen in Yola last Thursday.
Onemaka urged the agitators to consider the consequences of plunging Nigeria into chaos by divisive activities, citing the devastating impact of the civil war.
“Biafra agitation has failed and there is no need to restart it; the agitators should consider the interests of the Igbo in other parts of the country.
“We, the Igbo in Adamawa, kick against the agitations for Biafra and we view it as unnecessary capable of plunging the nation into crisis.

Ekiti
Six middle-aged men were last Thursday brought before an Ado-Ekiti Chief Magistrates’ Court over alleged membership of a secret cult.
They were however, released on N1.2 million bail.
The accused are Adewale Akosile, 30; Jimoh Lukman, 25; Amusa Jamiu, 25; and Timothy Thomas,23.
Others are Sefun Akinola, 26 and Ojo Akinola 20.
Police Prosecutor, Caleb Leranmo, told the court that the accused committed the offence at 10.00 a.m. in Omuo Ekiti.
According to him, the men paraded themselves openly as members of Ashanti secret society, a platform they used in terrorising the community.
The offence contravened Section 4(1) of the Secret Cult (Abolition and Prohibition) Laws of Ekiti State 2006.

FCT
A Federal Capital Territary (FCT) Area Court in Karmo has sentenced a 36 year-old driver, Obum Nwokoro to six months in prison for concealing a crime.
Nwokoro of Dako village in Abuja was convicted after he pleaded guilty to the one-count charge.
The court however gave him an option of N20, 000-fine after he pleaded for leniency.
The judge, Abubakar Sadiq, who gave the judgment last Thursday, said the conviction would serve as a deterrent to others.
The prosecutor, Mr Dalhatu Zannah, had earlier told the court that on September 12, one Olusegun Olusola of Shippers Plaza, Wuse Zone 5, Abuja, reported the incident at the Utako Police Station.

Kaduna
The National Agency for Food and Drug Administration and Control (NAFDAC) has urged the media to support ongoing efforts to contain alarming substance abuse in the North-West.
NAFDAC’s North West Coordinator, Mr Sabo Adamu made the appeal when he paid a courtesy call on the Zonal Manager, Kaduna, Malam Maharazu Ahmed.
“We are concerned about the alarming rate of drug abuse in the zone and will require the support of the media to drastically reduce the menace.
“North-West zone has high rate of drug addiction that even housewives are not left out.
“Our youths are getting more and more into drugs everyday and we must stop it, as it portends great danger to the survival of our society,” he said.

Kano
Kano State Government, says it has uncovered a salary fraud amounting to N12.7 million in two parastatals in the state.
A statement by the Public Relations Officer, office of the state Head of Service, Malam Mustapha Fagge, said the fraud was uncovered in the State Hospital Management Board and Senior Secondary Schools Management Board.
According to the statement, the discovery followed an investigation ordered by the Head of Civil Service, Alhaji Muhammad Na’iya.
“As a result of the investigation, a case of alleged connivance involving some Computer Centre staff and two others on posting from the office of the Auditor-General was discovered”, he said.

Kebbi
Governor Abubakar Bagudu of Kebbi State has called on stakeholders in the education sector to come up with new solutions to address illiteracy in the country.
Bagudu made the call when he received the stakeholders, led by the Minister of Education, Malam Adamu Adamu in his office last Thursday.
The stakeholders were in Kebbi State to commemorate the 2017 International Literacy Day.
The day is celebrated every September 8. In Nigeria, the National Commission for Mass Literacy, Adult and Non-Formation Education said.

Kwara
Offa Local Government Catholic Relief Services (CRS) says it will distribute 64,000 long lasting insecticidal nets to residents of the community.
The CRS, Social Mobilisation Officer, Mrs Jemilat Yusuf told newsmen last Thursday in Ilorin that cards had been distributed to recipients.
Yusuf said that the exercise would commence on September 29, adding that all residents cooperate with the service to ensure a successful outing.
She said the residents should come out en masse for collection of the nets to eradicate malaria and other related diseases in the society.

Lagos
A 61-year-old man, Solomon Atuegbu who allegedly drove his vehicle recklessly and killed a 29-year-old pedestrian, John Odufele was last Thursday in Lagos granted a N500,000 bail.
Atuegbu who resides at Mile 2 area of Lagos State is facing a two-count charge of dangerous driving and manslaughter.
The accused, however, pleaded not guilty to the charge.
An Apapa Magistrates’ Court which gave the ruling said Atuegbu should provide two sureties as part of the bail condition.
The Senior Magistrate, Mr M.A Etti said the sureties should be gainfully employed and they should also show evidence of two years’ tax payment to the Lagos State Government.

Nasarawa
FCT Chief Judge, Justice Ishaq Bello has urged judges and magistrates in the territory to be diligent in the discharge of their duties.
He gave the charge during an assessment visit to the Medium Security Prison, Keffi Unit, Nasarawa State last Wednesday.
He said judges and magistrates must be diligent to preserve the integrity of the justice system, adding that it must be done to repose public confidence in the system.
He added that he was aware of 27 inmates who had been in prison custody without proper signing of their detention warrant, noting that there should be proper warrant for detention before anybody was detained.
Bello said he had been ordered by the Controller-General (CG) of the Nigeria Prison, Mr Ja’afaru Ahmed to investigate the matter.

Niger
The Child Rights Protection Agency in Niger State last Thursday vowed to uncover  the killers of three children during an attack on Yakpa village, Shiroro Local Government Area of the state.
The Director-General of the agency, Mrs Mairam Kolo, who visited families of the deceased at Gwada Hospital where one survivor was receiving  treatment, described the killing as “wicked and heartless”.
Our correspondent reports that unidentified gunmen attacked a Fulani community in Yakpa on September 15 and killed three children aged between three and five.
Kolo said that the agency would work with relevant security agencies and volunteers to ensure that the perpetrators were arrested and prosecuted.
She directed the immediate transfer of the survivor to Minna General Hospital for proper medical care, pledging that the agency would settle the medical bill.

Plateau
The Plateau State chapter of All Progressives Congress (APC) last Thursday promised to support young people to run for various offices in the forthcoming local government polls in the state.
Chairman of the party in the state, Latep Dabang, said this at a three-day town hall meeting with political parties in Jos.
Our correspondent reports  that the forum is organised by the Plateau State Coalition on Electoral Reform and Good Governance (PLASCER).
The meeting was supported by the Community Action for Popular Participation (CAPP), Actionaid Nigeria, UKaid and BBC Media Action.
PLASCER is a coalition of Non-Governmental Organisations (NGOs) and Community Based Organisations (CBOs), among others.
The meeting had representatives from the PDP, APC, ADP, INEC, CBOs, NOA, among others.