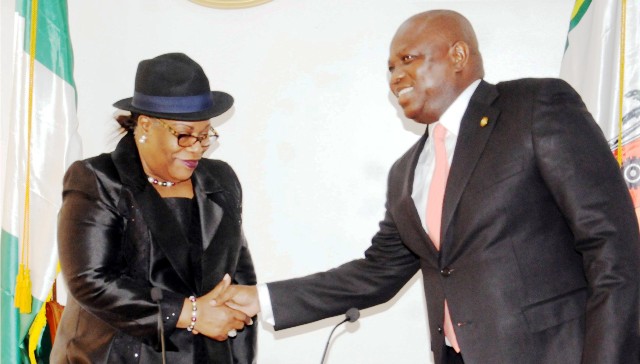 Adamawa
The Victims Support Fund (VSF) recently commenced the reconstruction and rehabilitation of public structures damaged by insurgents in Michika Local Government Area of Adamawa State.
Speaking during a ceremony to mark the commencement of the exercise, Executive Director of the fund, Prof. Sunday Ochoche said the sum of N390 million would be expended on 13 structures in the area.
Ochoche said that the fund would work closely with the state government technical team to ensure quality job.
Speaking at the occasion, Governor Muhammadu Bindow of Adamawa State lauded the Federal Government for its intervention through VSF and other agencies in bringing succour to the people of areas affected by the insurgency.

Benue
Benue State Governor, Samuel Ortom said last Monday that the state was committed to building a strong and indivisible Nigerian nation and would never support any secessionist agitation.
Ortom, who spoke at a meeting with Benue State Council of Chiefs, also restated government’s readiness to protect the rights of Nigerians resident in the state, irrespective of their ethnic backgrounds.
The meeting, held in Makurdi and attended by various stakeholders and the leadership of tribal and religious groups resident in Benue, was a proactive measure against reprisal violence over skirmishes in some parts of the country.
“Benue is not in support of any secessionist agitation and will not want mischief makers to cause violence in the state. People with such plans are advised to leave in their own interest,” he said.

Borno
The Theatre Commander of “Operation Lafiya Dole’’, Maj.-Gen. Ibrahim Attahiru has admonished troops to show discipline and professionalism in the counter-insurgency operations of the armed forces.
Attahiru made the call during a visit to 8 Task Force Division at Mongonu, near Maiduguri in Borno State.
His call was contained in a statement signed by the Deputy Director of Army Public Relations, Col. Onyema Nwachukwu in Maiduguri last Wednesday.
Attahiru told the troops to shun vices and to stay away from nefarious activities that would go against the mandate and goals of the operation.
“Discipline is the bedrock of every army and therefore, essential to fast-track total and outright defeat of Boko Haram insurgents.

Kaduna
Governor Nasiru El-Rufai of Kaduna State has reiterated his government’s commitment to reforming the civil service to enable it attain global standards.
El-Rufai expressed the commitment at the opening ceremony of Stream 2 of the National Capacity Building Conference on mainstreaming best practices in public service examinations held in Kaduna.
Reports said that the conference was organised by the Kaduna State Civil Service Commission in collaboration with the Examinations Ethics Marshals International.
The conference had the theme: Towards High Performance Workforce in MDAs, LGAs, Parastatals, and Institutions in a Season of Resource Scarcity.

Kogi
Kogi State Commissioner for Environment and Natural Resources, Mrs Rosemary Osikoya, has  appealed to residents of the state whose houses were located in flood plains to vacate those areas.
Osikoya told newsmen that in spite of warning on the dangers of living in such areas, some of  the inhabitants had refused to relocate
According to her, those who refused to heed to the advice are arguing that “flood is seasonal” and that it will “come and go”.
“We want to plead with everybody in flood prone areas, including businessmen and women, to move out of the area to uplands; this is the time for proactive action,” she said.

Kwara
An Ilorin-based legal practitioner, Mr Abdullahi Suleman has warned parents against denying their children food as form of punishment.
He gave the warning in Ilorin in an interview with newsmen, describing it as “wicked and inhuman.”
He said some parents were fond of starving their wards as punishment for doing wrong, stressing that “such an act is against humanity and dangerous to health.
“Children should never be denied food for whatever reason. It can drive them to stealing as alternative to solve their hunger.
“That is why some children can easily be lured into bad acts, as they will be enticed with things as little as sweets as food, to do what they are not supposed to do.

Lagos
The National Conscience Party (NCP) says it will not participate in the bye-election, slated for September 30 in the Eti-Osa Local Government Area of Lagos State.
According to reports, indicate the election is to fill the vacant seat, arising from the death of the lawmaker representing the area, Mr Kazeem Alimi who died on July 18.
The Lagos State Chairman of the NCP, Mr Fatai Ibu-Owo, told newsmen that the NCP was not interested in the election and therefore, had no candidate.
He explained the party was currently pre-occupied with strategising for the 2019 elections and so had no time for the bye-election.

Nasarawa
An Islamic cleric in Nasarawa State, Malam Ishaq Adudu has sued for peace and tolerance in the country, irrespective of ethnic, religious and political affiliations, despite agitation by Indigenous People of Biafra (IPOB).
Adudu who is the Chief Imam of Gidi Magoro, Lafia Mosque made the call in an interview with newsmen in Lafia.
He said peace was a necessary requirement for the development of any nation, hence the need for agitators and other Nigerians to embrace peace and be law abiding at all times in the interest of development.
The cleric urged youths not to take the law into their hands but to report unlawful activities to the appropriate authorities for necessary action.

Niger
A cross section of Minna residents have commended Governor  Abubakar Bello for prompt deployment of armed security personnel in and outside the metropolis.
A resident of  Saukahuta Mr Innocent James, told newsmen in Minna that the quick intervention of the governor has prevented unnecessary tension.
“Miscreants have started looting shops and threatening residents at Chanchaga, Saukahuta, Bosso and city gates.
He said that the deployment of security personnel in strategic locations in the metropolis had calmed nerves.

Ogun
An Idi-Ogungun Customary Court at Agodi in Ibadan last Tuesday dissolved a  seven-year-old marriage between Samuel Adeboye and his wife,Temitope over the woman’s battering by the second wife.
The President of the court, Chief Mukaila Balogun, leading other assessors — Aare Samotu and Ganiyu Alao — gave the verdict, saying both parties can no longer live together peacefully as husband and wife.
“Evidence of parties have proved that love does not exist between them; moreover, the respondent has agreed to the dissolution of the union as requested by his estranged wife.
“Based on this evidence, the marriage is thereby dissolved and the custody of the two children of the union is to remain with the plaintiff (Temitope).

Ondo
A socio-political group, Ondo State Peoples’ Assembly (OSPA), has lauded the Minister of State for Niger Delta, Prof. Claudius Daramola, for facilitating the first Niger-Delta Summit in the state.
The group in a communiqué in Lagos recently commended Daramola who hails from Ode-Aye in Okitipupa Local Government of the state for his unsung achievements, especially in Ilaje/EseOdo oil producing communities, for enabling peace.
The communiqué was jointly signed by its Chairman and Secretary, Chief Niyi Netufo and Pastor Ishola Omoyele, respectively.
The second National Council on Niger Delta (NCND) summit and first in Ondo State in collaboration with the state government was held in Akure between September 7 and September 14.
The Vice President, Prof. Yemi Osinbajo, on September 12, addressed the meeting with the theme “Fast-tracking the Development and Peace of the Niger-Delta Region: Options and Prospects.”

Plateau
Governor Simon Lalong of Plateau State has approved the relaxation of dusk to dawn curfew imposed in the state following violent clashes.
The governor relaxed the curfew from 6 p.m. to 6 a.m. to 10 p.m. to 6 am.
It would be recalled that following last Thursday’s clashes that resulted in the death of two persons, the state government imposed the curfew in Jos-Bukuru metropolis.
A statement last Sunday by Lalong’s Director of Press and Public Affairs, Mr Emmanuel Nanle, said that the decision to relax the curfew was due to improved security.
“The governor of Plateau, having considered the improvement in security, has approved the relaxation of the curfew to now start 10p.m. to 6a.m. with effect from Sunday, September 17 till further notice.”
The governor in the statement appreciated the swift response of security personnel to contain the situation.