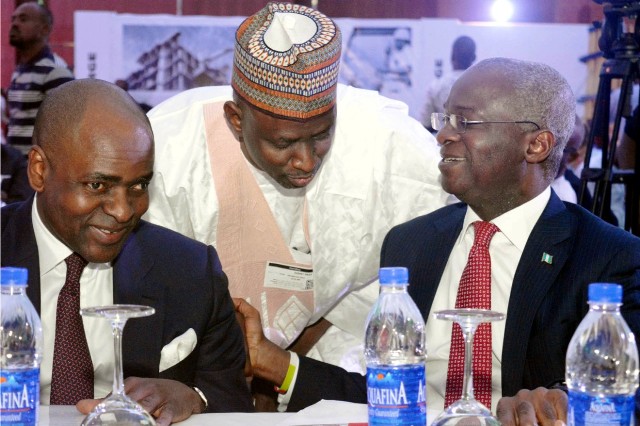 Adamawa
Vice-President Yemi Osinbajo last Saturday in Yola, reinstated the commitment of the Federation Government to keep one, indivisible Nigeria.
Osinbajo made the commitment while speaking at the reception in Yola in honour of the new President of the Lutheran World Federation (LWF), the Most Reverend Musa Filibus.
The vice-president, therefore, urged Nigerians to sustain the unity which he said was the dream of the fore fathers of the country.
According to him, Christians are encouraged to pursue justice and reconciliation with people of other faith.
While congratulating Filibus for being the first Nigerian and second African to emerge President of LWF, Osinbajo urged him to work toward uniting the church and promoting peace and love.

Benue
The Senate Committee on Works has asked the Federal Government to revoke the N3.2 billion contract for the reconstruction of Wannue-Yadev road in Benue, citing alleged incompetence by the handler.
Reports that the 19-kilometre road contract, awarded in 2013, had a completion period of 24 months.
Its chairman, Sen. Kabiru Gaya, told newsmen in Gboko that his committee was “greatly disappointed” that not much had been achieved in the execution of the project four years after it was awarded.
“We have gone round several portions of the road; we have asked questions and made observations. Our conclusion is that the contractor lacks the capacity to handle the job.

Borno
The United Nations Children’s Fund (UNICEF) has called on Boko Haram sect to stop the recruitment and use of children as suicide bombers in the North-East.
UNICEF also called on all parties in the conflict to respect international child right laws.
The UNICEF’s Country Representative, Mr Mohamed Fall, made the call after the official signing of Action Plan Agreement against recruitment of children between the organisation and Borno State Civilian Joint Task Force (CJTF).
Reports that the Action Plan Agreement was signed by the UNICEF, Borno State Government and CJTF, in Maiduguri.
Fall noted that the increase in the use of children in the conflict in the North-East was a source of concern to the UN and it must stop.

FCT
The President of the Senate, Dr Bukola Saraki, said the Senate would meet with security chiefs to chart a path for resolution of contentious issues engendering tension in the South-East.
He said that the meeting, expected to hold shortly, would address the tension in the South-East and the skirmishes in Plateau State.
Saraki said in a statement last Sunday in Abuja that security agencies, political and religious leaders must work for the promotion of dialogue as means for tackling agitations, to ensure peace in the country.
In the statement by his Special Adviser on Media and Publicity, Yusuph Olaniyonu, he urged all Nigerians to maintain peace and avoid statements or actions capable of aggravating the tension in parts of the country.

Kaduna
Kaduna State Muslim Pilgrims Welfare Board last Saturday said a total of 2,842 pilgrims from Kaduna had returned home after performing 2017 hajj in Saudi Arabia.
The Board Public Relations Officer, Yunusa Abdullahi, made this known in a telephone interview with newsmen in Kaduna.
Abdullahi said that the pilgrims returned by Medview and Max Air in six flights.
He said Medview transported 1,786 pilgrims while Max Air transported 1,078 pilgrims.
“The 6th batch with 542 pilgrims will return on Saturday via Max Air airline.

Kogi
The World Bank-sponsored Kogi State Integrated Financial Management Information System (SIFMIS) is to commence operation in October.
Mr Aminu Ibrahim, the Manager of the project, disclosed this while speaking at a presentation of the integrated system during a seminar for journalists in Lokoja last Wednesday.
Ibrahim said that the system would ensure efficiency, effectiveness, accountability and transparency in public finance as part of the requirements for reform agenda of the Federal Government and the National Economic Council.
He said that project contract agreement was awarded in April and signed by the state Public Sector Governance Reform Development Project and the contractor, Messrs Counterhouse Consultants Ltd.

Lagos
The Consul-General of Germany in Lagos, Mr Ingo Herbert on Saturday enjoined more young Nigerians to begin to engage themselves in vocational programmes that would make them employable.
Herbert gave the advice in Lagos at the graduation ceremony of 19 young Nigerians that benefited from the German Dual Vocational Training (DVT) Partnership with Nigeria.
The Consul-General, who was represented by the Consulate’s Commercial, Political, Cultural and Press Attaché, Mr Sebastian Polzin said that Germany had always encouraged DVT for young men and women.
“We want to also see more young Nigerians engage themselves in vocational training; this way, unemployment would be reduced.

Nasarawa
Governor Tanko Al-Makura of Nasarawa State has appealed to the Federal government to gazette the state-owned Lafia-Kwandere-Keffi road as a federal road.
He made the appeal in Lafia last Saturday when members of the Senate Committee on Works, led by its chairman, Sen.Kabiru Gaya paid him a courtesy visit.
The governor said the call became necessary to speed up the completion of the road for the benefit of travelers.
“Basic infrastructure starts and ends with roads, road being the most flexible infrastructure gives every citizen the opportunity to link up from one place to another.

Niger
A cross section of Minna residents last Saturday lauded Governor Abubakar Bello for prompt deployment of armed security personnel in and outside the metropolis.
Mr Innocent James, a resident of  Saukahuta told newsmen in Minna that the quick intervention of the governor has avoided unnecessary tension.
“Miscreants have started looting shops and threatening residents at Chanchaga, Saukahuta, Bosso and city gates.
He said that the deployment of security personnel in strategic locations in the metropolis has calmed nerves.

Osun
The United Nations Children’s  Fund (UNICEF) is to organise  a workshop on Menstrual Hygiene Management (MHM) for secondary school girls in Osun, Kano and Enugu to identify  the challenges with the condition  and  ameliorative measures.
The UNICEF Coordinator of Menstrual Hygiene Management (MHM) Mr Femi Aluko, in Osun,  told newsmen Sunday in Osogbo that stakeholders  would gather to address the challenges facing    MHM such as  taboos and poor hygiene among female school girls.
NAN reports that menstruation is a normal biological process and a key sign of reproductive health, yet in many cultures it is treated as a  negative, shameful or dirty condition.
A study from UNICEF revealed that one  out of  three  girls in South Asia knew nothing about menstruation prior to getting it while 48 per cent of girls in Iran and 10 per cent of girls in India believe that menstruation is a disease.

Plateau
Rev. Fr Philip Jamang of Church of Assumption, Chongo-Pyel in Jos, has charged Nigerians, especially Christians, to eschew violence and imbibe the virtues of love and forgiveness.
Jamang, in his sermon in Jos last Sunday, said that the two virtues were key to the harmony and stability craved by all Nigerians.
He said that unity would be enhanced if Nigerians were quick to love and forgive each other as one people bound by the same destiny.
The cleric attributed most of the challenges threatening the country to bitterness bottled up in the minds of Nigerians, saying that growth and prosperity would continue to elude the nation if that continued.

Zamfara
The Eze Igbo in Zamfara state, Igwe Egbuna Obijiaku has commended the South East Governor’s Forum for banning the activities of the Independent Peoples of Biafra (IPOB).
Obijiaku, who gave the commendation last Saturday while speaking to newsmen in Gusau , said that Igbos in Zamfara were not in support of the  activities of IPOB.
He urged the Igbo community in the state to disregard the Biafra agitation by members of the IPOB.
According to him, the IPOB agitations for Biafra nation apart from its threat to national unity, peace and stability is also a big threat to Igbo economic stability.
“We are solidly behind our leaders and governors in this regard, we are also in support of the decision of the Forum of Igbo traditional leaders of all the 19 Northern state,” he said.
“If we look at the entire population of Igbo community, only 40 per cent are living on Igbo land, about 40 per cent are living in the Northern parts of Nigeria, almost 15 percent are living in South Western parts of the country and the remaining five per cent are living abroad.