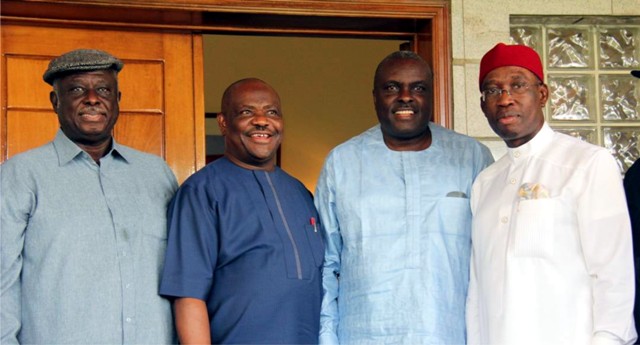 The Rivers State Governor, Chief Nyesom Wike has called on Niger Delta leaders to unite for the rapid development of the geo-political zone.
The governor said that unity was needed in the geo-political zone to check the current situation where outsiders take advantage of the disunity of the area to deny the people benefits of their resources.
Wike, who is also a co-chairman of the PDP Reconciliation Committee, spoke last Saturday in Oghara, Delta State during a meeting with former Delta State Governor, Chief James Ibori and the Delta State Governor, Dr Ifeanyi Okowa at the former governor’s residence.
The Rivers State governor said: “Niger Delta must continue to be united. Whatever it takes, unity is still very key. When we are divided, outsiders will come and exploit our resources to the disadvantage of our communities.
“We have to fight to protect the interest of the Niger Delta. We draw strength from people like former Governor, Chief James Ibori, a man who has variegated experiences”, he added.
Wike said that Rivers and Delta states were cooperating to fast-track the development of the Niger Delta.
“We must work as brothers. We must work as a team. We must not allow our united front to be divided”, he pleaded.
In his welcome remarks, former Delta State Governor, Chief James Ibori commended the governors of Rivers and Delta States for their cooperation on development issues.
He urged both governors to work towards building a stronger united force for all the Niger Delta states.
Ibori said: “We need to be united to be able to serve our people better. We have to cooperate for the good of our people.”
The former governor commended the developmental efforts of the Rivers State governor, urging him to do more to sustain the tempo of his projects delivery.
Also speaking, Delta State Governor, Senator Ifeanyi Okowa said the Rivers State governor was a grassroots politician who was providing effective leadership for his people.
Okowa said that in Delta State, the political class was under one political family led by the former Delta State governor, Chief James Ibori.
The Delta State governor said that the Niger Delta needs to work together for the geo-political zone to be a stronger political voice in the country.
He said: “We will continue to build on the friendship based on the interest of our people.”
The meeting later went into a closed door session.
The Rivers State governor was accompanied on the visit to Oghara by former Acting National Chairman of PDP, Prince Uche Secondus, Senator Lee Maeba, former Deputy Speaker, House of Representatives, Austin Opara, former Minister of Sports, Dr Tammy Danagogo, and Administrator, Greater Port Harcourt City Development Authority, Amb Desmond Akawor.
Also present were Senator Peter Nwaobishi and senior associates of the former Delta State governor, Chief James Ibori.