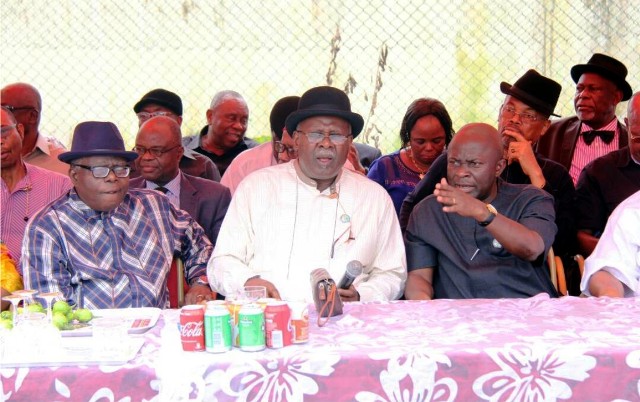 Worried by the damage done to some parts of Queenstown  and Kalaibiama communities in Opobo/Nkoro Local Government Area of Rivers State, recently ravaged by erosion, President of a Non-Governmental Organisation (NGO), the United Brothers of Opobo Kingdom (UBOK), Mr. Mike Fubara  has passionately appealed  to the State Govrnor, Chief Nyesom Wike to come to the aid of the  communities.
Fubara who made the appeal in  Opobo Town while exchanging views with The Tide last Tuesday, lamented that various parts of the towns are currently under threat  by erosion.
While noting that some self-help efforts embarked  upon by indigenes of the erosion-prone areas had not yielded  the required results, he stressed that unless the state government takes steps to rescue the affected towns, most habitable structures and fishing settlements as well as farmlands were at the risk of  being washed away by erosion especially  now that the rainy season is severe.
“If you visit places such as Queenstown, Kalasunju, Kalama which comprises Aya-Minimah, Okpukpo, Iloma,  Oloma, Epellema and Ekereborokiri, Opobo  Town, Kalaibiama and Nkoro communities this time, you will discover  the enormity of the damage the erosion  has done to  these  places”, he said.  According to him “most, houses in these communities are under severe threat  and unless someting serious is done  about it, anything can happen. It is true  that sometimes ago, government did its best to create drainages to check the  menance at the  satellite  towns of Opobo and Nkoro, but it appears it is not enough as the scourge persisted.”
As he puts it, “If you are opportuned to visit these areas in questions, you will certainly weep for the inhabitants due  to the menace of erosion in the places which had subjected the people to untold  hardship”.
He expressed the belief  that with the support of the state Governor, Chief Nyesom Wike,  the problems  bedeviling these communities will be a thing of the past  because there is  no amount  of self-help project that can  check the erosion  problem facing the  populace  of these towns.
Meanwhile, Fubara has commended the State Governor, Chief Nyesom Wike for his accelerated development of  Rivers State in the past two years, especially on road construction, rehabilitation and the face-lifting of  other sectors for blissful future,  adding that  with  this lofty strides, the governor has been able to prove the opposition parties and book-makers wrong.
He used the opportunity to appreciate the governor in his office to renovate the abandoned and dilapidated hospitals,  schools and other moribund infrastructure across the 23 local Government   Areas of the state, including the Opobo General  Hospital.
He also appealed to Governor Wike  ensure the early completion  of the Opobo  Unity road under construction by prevailing on the constructors  handling it to keep to specification.
The group leader also used the opportunity to enjoin Rivers people no matter their political inclinations to rally round the governor and his team to be able to deliver the dividends of democracy to them.