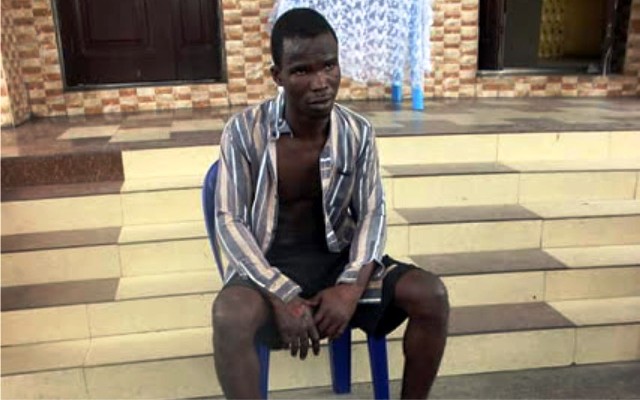 The Rivers State Police Command has arrested a 200 level student of the University of Port Harcourt (UNIPORT), Mr. Ifeanyichukwu Maxwell Dike for allegedly killing one Miss Chikamso Victory, an eight-year old girl for ritual purposes.
Dike, who is of the Department of Physics, was arrested, last Saturday at about 0130hrs by men of the Okporo Police Station who were acting on a tip off.
Briefing journalists in Port Harcourt over the weekend, the Rivers State Commissioner of Police, Mr. Zaki Mohammed Ahmed said the accused abducted the deceased and killed her, last Saturday.
Represented by the Police Public Relations Officer, DSP Nnamdi Omoni, the commissioner of police disclosed that the little girl, who was a neighbour living in the same address with the accused was abducted, defiled and killed, adding that the suspect removed her vagina, eyes, tongue and breast before putting her in a polythene bag.
According to him, the suspect was going to dispose of the body when he was arrested by members of the local vigilante who suspected his movement in the neighbourhood.
He said that the suspect later dropped the bag and ran away while he was interrogated by the local vigilante in the area.
The state police boss averred that members of the vigilante gave the suspect a hot chase, nabbed him and later handed him over to the police.
He said that on further interrogation by the police, Dike confessed to the crime, and took the police to where the organs were concealed.
“The body and the organs have been recovered, paraded and deposited in the mortuary, while the suspect is helping the police in investigation”, he added.
Speaking to journalists, the father of the deceased, Mr. Charles Ernest Mezioba said he left his daughter at 7am for work on that fateful day alive only to return at about 3pm and discovered that his daughter was missing.
He said that he and his wife embarked on intensive search for their daughter only to be told that the suspect killed his daughter, removed her tongue, vagina and breast before putting her into polythene bag.
“I left my daughter to work with the mother at about 7am and returned at 3pm. We searched for her but later we were told that they had caught the boy who killed my daughter.
“When I reached there and saw the police, I asked where my daughter was, they showed me the polythene bag. When I looked inside, I saw that the tongue, breast, vagina and other essential parts of her body had been removed”, he stated.
Also speaking, the suspect, Mr. Ifeanyichukwu Maxwell Dike, admitted committing the crime, explaining that his intention was not to kill the girl.
He claimed that her death was due to the wrong application of the drug given to him by his cult master.
According to him, his cult master had in 2016, promised to make him rich and independent, adding that he injected overdose injection on the girl which led to her death.
“I did not want her to feel pains while I removed what I wanted from her body. I was carrying out an assignment given to me by my cult boss who wanted to make me rich and independent since 2016”, he stated.