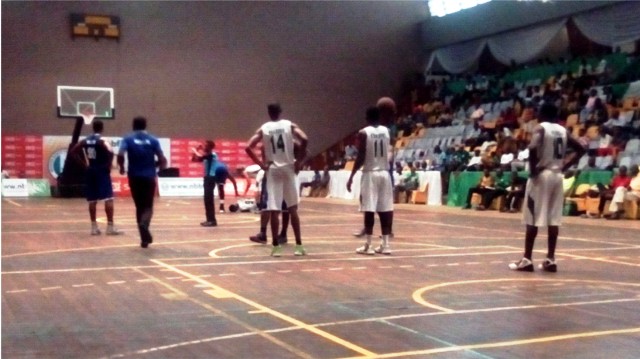 River Hoopers last Wednesday, defeated newly promoted Hoops & Read team 83-75 at the indoor Sports Hall, Kwara State Stadium, Ilorin.
Solomon Ajegbeyi led the way for Hoopers, he scored 18 points 14 rebounds, Emmanuel Balogun added 14 points, 4 rebounds and 2 blocks, Ronald Alalibo made 12 points and 3 rebounds while Bodisowei Zidougha added 10 points.
It was Ajegbeyi’s fifth double-double of the season and the first in the playoffs. The last time the forward made a double-double in a game was against NAF Rockets on June 1 in Lagos.
Hoopers struggled from the beginning and didn’t score within the first 5 minutes of the first quarter. Hoops had 4-0 run before the KingsMen eventually got a 3 point shot through Alalibo. The first quarter however ended in a tie (13-13), one of the 8 ties in the game.
Rivers Hoopers coach, Ogoh Odaudu, believed experience played a major role in their win against the youthful Hoops & Read.
“In the end, experience won the game for us, I knew the game was going to turn out like this. We were playing against a very youthful team, energetic team and they were running up and down and once we took the lead in the fourth quarter, we never gave it back, said Odaudu.
On his part, Hoops & Read coach, Charles Oso, blamed the loss to mistakes made by his team in the game.
“We were not doing so well at the free throw line and that really killed us and we went on too many turnovers at half time we were like 18 turnovers. If all these had not happened, we should have won the game”,  he said.