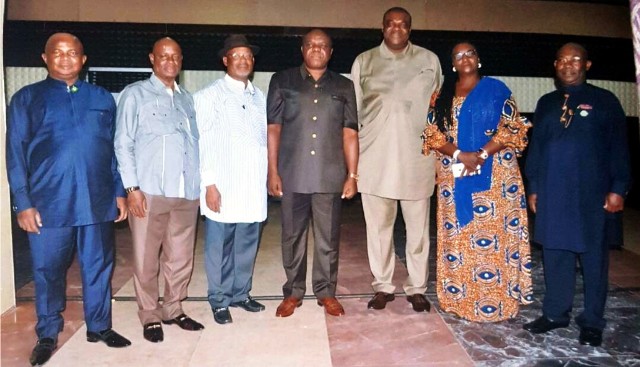 As Nigerians who were hoodwinked to vote for the All Progressives Congress (APC),  in 2015 become restives because of  their unfulfilled electoral promises and  manifest incompetence, the Coalition of Rivers Patriots says the party especially in Rivers State  is resorting to dubious predictions, blackmail and more falsehood against reality and self deception.
In a statement signed by the Publicity Secretary, Barr. Barilede Thompson,  the Coalition of Rivers Patriots said Nigerians no longer have confidence in the APC,  and that the party  is on its way out of power at the centre.
It regretted that  Nigerians, who are pained that the APC has put  the nation’s development on the reverse gear in the last two years, failing in all fronts, as well as  setting new records of governance by proxy.
The  groups  further maintained that Nigerians are now wiser, having realised that  APC do not have  a credible  road map to take Nigeria to greater heights.
It described as laughable a press statement issued by the APC in the state, showcasing as usual its traditional hallucination, but rechristened as prediction,  that Governor Ezenwo Wike of Rivers State is destroying the Peoples Democratic Party, PDP, at state and federal levels.
The Patriots said Rivers people have not forgotten in a hurry how  Senator Magnus Abe and other  APC chieftains in Rivers  almost set the state on fire a couple of days ago because of the party’s  fraudulent non – elective congress, but for the intervention of  the police in the state, dismissing the APC as a balkanised party, lacking in credibility.
The group contends  that the  lies that brought APC to power can no longer sustain  them  in office,  as disappointed Nigerians are now rooting for the PDP,  having realized that it is a better platform for the transformation of  Nigeria.
The Patriots  recalled how former Governor, Rotimi Amaechi destroyed governance in Rivers State by not only selling  off valued assets of the state, but by mismanaging the proceeds, insisting that  the Rivers State Government had no option than to prosecute him and his collaborators.
The group advised Amaechi to prove his innocence in court if he strongly feels that the documents  being used to  prosecute him are forged, adding that no amount of blackmail will stop the state government from going ahead to ensure that those who betrayed the trust of Rivers people do not go unpunished.
It stated that while Amaechi inherited a robust state, he left behind an empty treasury for his Wike who  he had boasted will not be able to pay salaries.
The group expressed  joy that Wike, right from his inaugural,  began to roll out plans, programmes and policies that quickly reversed the enormous damage done by Amaechi and his co-travellers, restoring the glory of the state which is now playing host to visitors and investors from all over the world.
Among the steps that Governor Wike took to right the wrongs of former Governor Ameachi  and restore the confidence of Rivers people in government, according to the Patriots included  the opening of courts  that were shut by Amaechi for more than one year, restoration of the dignity of the legislature and payment of arrears owed civil servants, as well as the reconstruction of all the abandoned  roads in the state.
“APC in Rivers can only be advised to embrace Governor Wike to increase the tempo of infrastructural development in the state as that is the only option open to them rather than resort to cheap blackmail, given the fact that he has shown that he has the capacity and capability to run the affairs of the state and promote inter ethnic harmony for the benefit of the people of the state”, the Patriots emphasised.