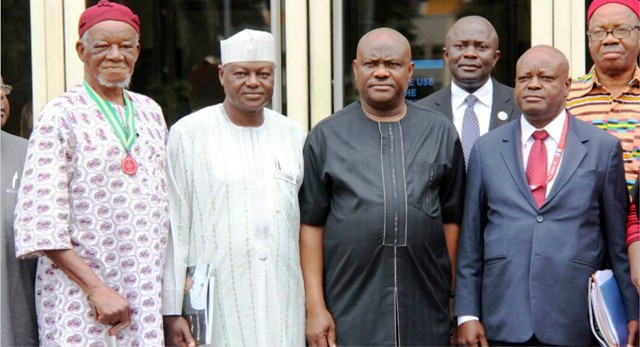 The recent strike embarked upon by Petroleum Tanker Drivers unit of National Union of Petroleum and Natural Gas Workers (NUPENG) over the deplorable state of the Akpajo-Onne section of the East-West Road, has caused apprehension among the public over imminent fuel scarcity in the state.
Some commercial drivers and a cross section of the public, who spoke with The Tide in Port Harcourt, yesterday, said the tanker drivers strike may result into serious fuel scarcity.
A fuel station pump attendant, Mildred Bassey, who spoke with The Tide, expressed worry over the strike action, noting that “If drastic measures are not taken, long queues may return to the fuel stations over scarcity of products”.
Bassey said fuel station owners were already watching the evolving scenario with caution and may conserve the stock in their possessions.
She called on the government to rehabilitate the bad portion of the road, and save the masses from severe suffering arising from products scarcity.
A commercial driver, Benson Oko, said the tanker drivers strike would definitely affect the distribution of petroleum products in the state, and lead to fuel scarcity.
Oko, appealed to the stakeholders to intervene in the matter to avert the sufferings that would be the lot of the people, if the strike persists.
“I am afraid, that if nothing is done, we are going to experience fuel scarcity in the state. It is not good, people will suffer, and the commercial drivers will be out of business. I want the government to intervene in the matter; the tanker drivers should also consider the masses and call off the strike”.
Another respondent, Mr. Peter Kponeh, appealed to the tanker drivers to call off the strike in the interest of the masses.
He said the masses would be the worst hit if there is fuel scarcity, and called on the government to resolve the issues to avert the looming fuel scarcity.
“Fuel scarcity is not good for our economy, especially now that we are facing serious economic challenges; I am appealing to the tanker drivers to call off the strike and save the masses from suffering”.
It would be recalled that the Zonal Chairman of National Union of Petroleum and Natural Gas Workers (NUPENG), Comrade Charles Alete, last weekend announced that tanker drivers in the state were embarking on indefinite strike to register their displeasure over the deplorable state of the East-West Road.
Alete, in a statement, disclosed that the strike was not intended to cause hardship for the public, but to save its members from endangering their lives, as the road was no longer conducive for movement of petroleum products.

‘Power Devolution, Only Way To Save Nigeria’