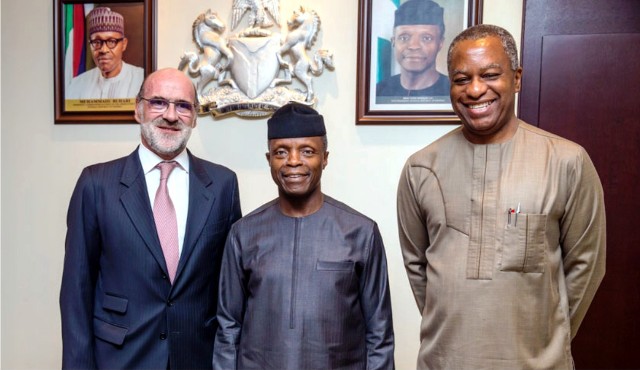 Borno
Governor Kashim Shettima of Borno State, has condemned last Wednesday’s attack on geologists and exploration workers from the Nigerian National Petroleum Corporation, (NNPC) and the University of Maiduguri by suspected Boko Haram fighters around Jibi village in the state.
Shettima made the condemnation in a statement issued last Thursday in Maiduguri by his Special Adviser on Communication and Strategy, Malam Isa Gusau.
He said that since he first got information concerning the attack on his way to visit President Muhammadu Buhari in London, he hasn’t been his normal self and is yet to recover from the shock of the attack.
“I haven’t been my normal self since I received information of that attack. What happened in the first instance was a tragic setback in the fight against Boko Haram and in Nigeria’s effort to expand its economic fortunes”, he said.

FCT
The National Union of Petroleum and Natural Gas Workers (NUPENG), has threatened to begin a strike in the Federal Capital Territory (FCT), over a dispute with Assets Management Company of Nigeria (AMCON).
Addressing newsmen in Abuja last Thursday after a National Executive Council meeting,  NUPENG President, Mr Igwe Achese, said the strike was inevitable because of three billion naira terminal benefits allegedly owed some sacked oil sector workers.
Achese said that those affected were former staff of Seawolf Drilling, an oil servicing firm, in Rivers State.
He said the management of AMCON was being lackadaisical in meeting its obligation of settling the workers.

Jigawa
The Fistula Foundation, Nigeria, last Tuesday said no fewer than 1.2 million women and girls were suffering  from Obstetric Fistula, (VVF) in the country.
The Founder and Executive Director of the foundation, Malam Musa Isa, said this in Dutse during the graduation of 108 rehabilitated obstetric fistula patients in the state.
Isa said that the foundation had from 2014 to date, rehabilitated a total of 408 VVF patients in the state.
He explained that obstetric fistula is a devastating condition brought about by child birth injury caused when a woman suffers a prolonged or difficult labour, without obtaining the right medical attention.
The executive director added that the baby usually dies and the woman is left not only without her child but also with a hole or fistula in her birth canal, resulting in chronic incontinence.

Kaduna
The Chief  of Air Staff, Air Marshal Sadique  Abubakar, last Thursday said, Nigerian Air Force (NAF) had within the past two years built about 2,000 housing units across its bases in the country.
The CAS spoke through Air Officer Commanding, Air Training Command, AVM Christopher Okoye at the 46th convocation lecture of Air Force Institute of Technology (AFIT) in Kaduna.
Our correspondent reports that the lecture, with the theme “Contemporary Issues in Aircraft Maintenance in the 21st Century’’, was delivered by Mr Olatunji Agoro, Director, Quality and Safety,  Dornier Aviation.
Abubakar said that NAF had been well funded within the past two years and expressed gratitude to President Muhammadu Buhari for the unrelenting efforts at making NAF better.

Kano
The Kano State University of Science and Technology(KUST), Wudil, has matriculated 4,988 students for the 2016/2017 academic session.
The Vice Chancellor of the university, Prof. Shehu Alhaji disclosed this during the university’s 16th Matriculation ceremony at its campus in Wudil last Thursday.
He said the faculty of Agriculture and Agricultural Technology had the highest registered students of 1,158, while the Faculty of Earth and Environment has the lowest students of 465.
He added that the matriculation was intended to extract a promise from each of the students of strick adherence and observance of the code of conduct of the institution which is contained in their handbooks.

Kogi
Kogi State Government said last Thursday that it had plans to partner with health practitioners in the private sector for the on the job training of its Environmental Health Officers (EHOs).
Director-General of the state Bureau for Public Private Partnership (BPPP), Mr Robert Achanya, disclosed this at a news conference in Lokoja.
He said the partnership would boost the capacity of the EHOs, get registered and certificated to enable them inspect premises according to the law for enhanced service delivery.
He said many of the EHOs in the state could not enforce environmental laws or carry out inspection of premises because they were not registered or licensed.

Kwara
A 37-year-old primary school teacher, Biodun Baba, was last Thursday arraigned before an Ilorin Senior Magistrates Court for allegedly defaming Senate President Bukola Saraki on Facebook.
Baba, a teacher at LGEA School, Olorunlana in Moro Local Government Area of Kwara State was alleged to have through his Facebook postings been inciting the public against Saraki.
The criminal charges were filed following a complaint by Alhaji Jimoh Adesina, Chairman, Kwara South chapter of the APC to the Chamber of S. I. Solagberu and Co, Ilorin.
Adesina, accused Baba of printing or engraving matters on his Facebook wall  known to be defamatory.

Lagos
Governor Akinwunmi Ambode of Lagos State, last Thursday appealed to communities not to misuse government projects and assets in their localities, but to take ownership and protect them for the benefit of all.
Ambode, who was represented by his Deputy, Dr Idiat Adebule, made the remark at a two-day leadership training for Lagos State Community Development Committees and Associations (CDCs).
The theme of the training was: “Inclusive Governance, a Catalyst for Sustainable Development’’.
He said that hostile attitude to government assets was a reflection of subject culture that prevailed under military rule when unelected and unaccountable government were the order of the day.

Ondo
Governor Oluwarotimi Akeredolu of Ondo State, last Thursday, lauded the achievements recorded by the Nigerian Navy, promising to support their operations in the state in any area they desired.
Akeredolu, spoke in Akure during a courtesy visit by the Flag Officer Commanding (FOC), Western Naval Command,  Rear Admiral Sylvanus Agada.
He said that the state, with its wide and deep coastline, would be of great benefit to the navy operationally.
The Governor said the area would provide a better atmosphere for training to the navy than many other parts of the country.

Oyo
Oyo State workers are to receive outstanding salaries for April and May from the recently released Paris Club refunds and the June monthly allocation.
It was gathered that the Oyo State Government received N7.9billion from the Paris Club refunds released by the Federal Government.
The Commissioner for Information, Culture and Tourism, Mr Toye Arulogun, disclosed this in Ibadan last Thursday, following the approval of Governor Abiola Ajimobi.
Arulogun said that about 72 per cent of the N7.9 billion Paris Club fund was committed to salaries and salary-related payments.
“President Muhammadu Buhari directed that at least 50 per cent of the Paris Club refunds should be committed to the payment of salaries of workers in States.
“Governor Ajimobi, who has always displayed his humanitarian and welfarist disposition and commitment to workers’ welfare, has committed above the stipulated 50 per cent to salaries and other allowances.

Plateau
Chairman of the Pankshin Local Government In-terim Management Committee (IMC),  Mr Stephen Jings, sacked on June 29, was last Thursday sworn-in as councillor representing Jing Ward in the reconstituted IMC.
The Plateau State Government had dissolved the IMC after serving for two years and reconstituted a new IMC in what Governor Simon Lalong said was part of efforts to breed new ideas into governance.
However, report reveals that, unlike in the past when councillors received salaries, those in the reconstituted IMC would receive only sitting allowances.
Sources indicated that Jings, who was sworn-in alongside 18 others by his successor, Mrs. Naomi Golmen, had tried to return as IMC Chairman, but was not successful as stakeholders were divided over his nomination.

Sokoto
The Sokoto State Government says it has spent N1.3 billion on its students undergoing various medical courses in the Islamic Republic of Sudan in the last two years.
The state Commissioner for Higher Education, Alhaji Sahabi Gada, made the disclosure in Sokoto last Tuesday while briefing newsmen.
According to him, about 100 indigenes of the state are currently studying medical courses in Sudan.
The commissioner explained that, the essence of sponsoring them was to address shortage of manpower in the health sector in the state.
He said that the government approved N900 million for local and other indigenous students studying various science courses outside the country.
The commissioner said that the money was meant for the payment of scholarship and tuition fees of the students.