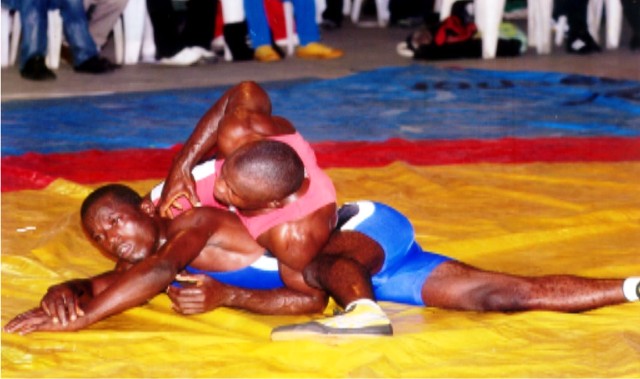 Rivers State, Governor, Nyesom Wike last Wednesday promised that the state would host the 2018 African Senior Wrestling Championships.
Wike made the promise to the United World Wrestling (Africa) while receiving President of UWW Africa, Fouad Meskoit,  in Port Harcourt.
Tidesports source gathered reports that Meskoit was in the Rivers capital to inspect facilities with regards to the bid to host the 2018 championships.
“As a state, we will put everything in place for the hosting of the wrestling competition in Port Harcourt because Niger Delta, particularly Rivers is the centre of wrestling.
“Let us know whatever you think that is not in place at the venue, we will fix it immediately.
“Be assured that Rivers people will be well mobilised to participate in the competition,’’ he said.
Wike assured them of the state government’s commitment to ensure the success of the championships.
“Port Harcourt is safe for any international competition, we shall provide the hotels you need for your comfort and make the competition a success,’’ he said.
The Rivers governor also promised to visit Morocco on the invitation of the UWW Africa President to see a Wrestling Centre there.
“I hope to honour your invitation to Morocco to see what you have as a wrestling centre and replicate it here within the time frame you built yours,’’ he said.
Earlier, Meskoit said that it was wrestling that started the Olympic Games.
He said that Nigeria almost lost wrestling chance in the 2012 Olympics but for Daniel Igali, the only one that stood and defended the game.
Meskoit said that as an inspector, he ought to be neutral but logic was in favour of Nigeria to host the competition.
He urged Wike to mobilise Rivers people massively to participate in the championships.
He commended the governor for the good works he was doing in the state and said that Rivers people would be proud of  him.
Meskoit was accompanied on the visit by President, Nigeria Wrestling Federation (NWF), Dan Igali, SWAN President Honour Sirawoo,  and Chairman of SWAN in Rivers Sopriala Bobmanuel,.