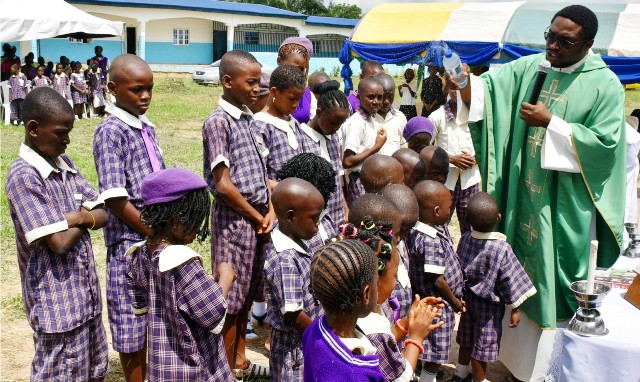 Benue
A Benue State-based Non-Governmental Organisation (NGO), House of Hilkiah Foundation, says educating the girl-child is a veritable tool that can help to minimise gender-based violence in the country.
The Chief Executive Officer of the foundation, Miss Dorothy Akende said this in an interview with newsmen last Monday in Makurdi.
He, therefore, urged the three tiers of government to focus more on girl-child education.
Akende said that the group had been involved in advocacy, encouraging communities to educate the girl child through its humanitarian services and education initiatives.
The founder of the NGO added that aside supporting education initiatives, the group had continued to fight retrogressive cultural practices on the girl child in the country.

FCT
The Director-General of the Nigerian Army Resource Centre, Maj.-Gen. Johnny Hammakim,  says more still need to be done to check violent extremism in the country even though Boko Haram has been degraded.
Hammakim said this last Monday when he declared open a four-day course on “Leadership in Counter-Terrorism and Counter, Violent Extremism’’ for senior military officers, police, para-military personnel and other stakeholders.
The course is organised by the resource centre in collaboration with the Peace Building Development Foundation (PBDF).
Hammakim described terrorism as a dynamic challenge where various issues come up every day.
“The ability to identify those issues and educate these stakeholders is very important that is why we are organising this course,’’ he said.

Gombe
The Gombe State Muslim Pilgrims Welfare Board (MPWB), says transportation of pilgrims from the state to Saudi Arabia for the 2017 hajj will begin on August 2.
The Secretary, Gombe State MPWB, Alhaji Usman Gurama, announced this last Thursday in Gombe, when he briefed newsmen on activities for the 2017 pilgrimage.
He said that preparations had reached about 95 per cent, and urged the pilgrims to abide by the flight schedule.
“When we talk of preparation for this year’s hajj, as far as Gombe State is concerned, we can say it is almost over, because we have achieved more than 95 per cent level of preparation so far.
“At this material time, we are close to even commencing the airlift of pilgrims.

Kaduna
Governor Nasiru el-Rufa’i of Kaduna State last Sunday appealed to parents to inculcate fear of God in children to ensure decent society and facilitate national growth.
He made the plea at award presentation ceremony for Qur’anic memorisation and Islamic quiz completion held in Zaria.
The competition was organised by Rep. Abbas Tajuddeen (APC Zaria) for schools in 13 wards of his constituency.
el-Rufa’i, represented by Executive Secretary, Muslim Pilgrims Welfare Board, Sheik Hussaini Tsoho-Ikara, said the call was necessary  because fear of God was a key to success.
While stressing the importance of religious education in shaping peoples’ life, el-Rufa’i observed that in life, there was nothing better than engaging in the services of the holy Qur’an.

Kano
The Nigerian Export and Promotion Council (NEPC), has proposed to the Federal Government the approval of five billion naira to support industries in the country.
The NEPC Executive Director Mr  Olusegun Awolowo,  made this disclosure last Monday during an inspection visit to some industries in Kano.
“One of our major aims for this visit is to find out the challenges these companies are facing and find a way to see how we can assist them in addressing them.
“The intervention is part of the Federal Government’s Export Development Fund for industries for pre-shipment incentive for exporters, which has been stopped three years ago,’’ he said.

Lagos
An Obstetrician and Gynaecologist, Dr Olawale Oba, has advised pregnant women to embrace vaginal birth rather than Cesarean Section (CS) if they have no medical condition warranting it.
Oba, who is a Senior Registrar, Department of Obstetrics and Gynaecology, Lagos University Teaching Hospital (LUTH), Idi-Araba, gave the advice in an interview with newsmen in Lagos.
“There are so many misconceptions about CS and vaginal birth; some women think that giving birth through vagina can slack their vagina.
“Some women are asking for cesarean section based on the fact that vaginal birth is painful.

Nasarawa
The Nasarawa State House of Assembly in Lafia last Wednesday passed a resolution, urging Gov.Umar Al-makura to arrest, prosecute and sack government officials found diverting fertilisers in the state.
The resolution was sequel to a motion on the matter, which was moved by Assemblyman Abubakar Kana (APC-Kokona West), Chairman, House Committee on Agriculture.
The Speaker of the Assembly, Alhaji Ibrahim Balarabe-Abdullahi, said that such action would serve as a deterrent to others and help in boosting food production in the state.
He called on farmers to report any case of diversion of fertilisers in their communities to the appropriate authorities for necessary action.

Niger
Wife of the Niger State Governor and founder, RAISE Foundation Cancer Screening Centre, Dr Amina Bello, said last Thursday that the foundation would partner with the Nigeria Association of Women Journalists (NAWOJ), to empower women in the state.
Bello said this when members of the state chapter of the association paid her a courtesy visit in Minna.
The foundation, an NGO, was established to raise awareness and spur affirmation on issues affecting the survival and growth of women and the girl-child.
Bello said that through the partnership, both organisations would engage in advocacy for improved reproductive health rights,awareness campaign on maternal and child health and development of the girl-child.

Ogun
For breaking into a church and stealing a set of drums valued at N75,000, a 44-year-old man, Prosper Onaka, is to spend the next three years in prison, an Ogun State court ruled last Monday.
An Ota Magistrates’ Court ordered that Prosper Onaka should be sent to jail for three years for breaking into a church and stealing a drum set worth N75,000.
The Senior Magistrate, Mr S.O. Banwo, who gave the ruling, did not give the convict an option of fine.
The Tide source eports that Prosper, whose address is unknown, had pleaded guilty to a two-count charge of stealing and burglary brought against him.
Earlier, the Prosecutor, Sgt. Chudu Gbesi, told the court that the accused committed the offences on July 11 at 6.30.p.m. at Iyana-Iyesi near Ota.

Osun
Governor Rauf Aregbesola of  Osun State has described the death of the popular  playwright, Adebayo Faleti, as a huge loss to the Yoruba language and cultural heritage.
In a condolence message issued on Monday in Osogbo by his media aide, Mr Semiu Okanlawon, Aregbesola said Faleti was a ‘complete man of the theatre – an actor, director, choreographer and designer ’ who created performance spaces influenced by traditional architectural forms. ‘’
He said  the appearance and dressing of Faleti spoke  volumes of his origin, adding that he was always ready to advocate the  promotion of Yoruba language and culture.
”I received with great sadness, news of the passing away of one of Nigeria’s gifted scholars, culture icons, nationalists and top-on-the-shelf dramatists, Pa Adebayo Faleti.
”The death of the playwright, theatre director and teacher was a huge loss not only to the creative world alone but also to the world of Yoruba language and culture heritage which he promoted till his death,’’ he said.

Yobe
A team of 25  doctors and other medical personnel have conducted successful surgeries, blood transfusions, emergency cases and general consultations for 650 patients at a medical outreach in Buni-Yadi, Yobe State.
Chairman MaiGoje Foundation, Dr Mohammed Goje,  disclosed this in an interview with newsmen last Sunday in Damaturu.
He said the foundation, Smile Mission and Edushine Organisation on Saturday, organised the outreach to provide healthcare service to the people.
According to him, the decision to organise the retreat is due to lack of functional health institution in Buni Yadi since the residents returned after their displacement by insurgents.
Goje said the doctors came from Kano, Abuja, Lagos, Maiduguri and Damaturu to provide free medical services to the community.
He said the outreach attended to cases of gynecology, pediatrics, dental, ear, nose and throat, and general ailments.