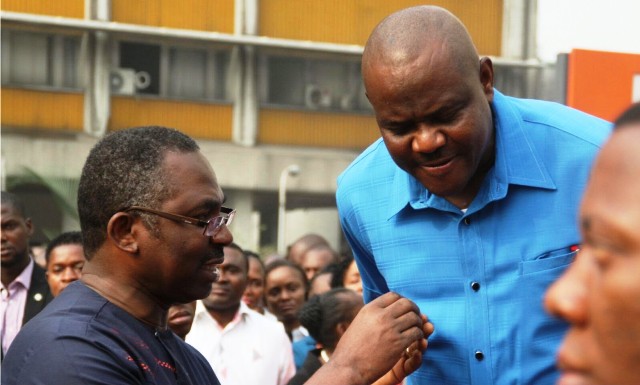 The Rivers State Head of Service, Barrister Rufus Godwins, has charged civil servants in the state to be committed to duty, as stiff penalties await civil servants who violate the ethical code of conduct in the civil service.
The head of service gave the charge while delivering a keynote address at a one-day training programme organized by the Nigerian Institute of Training and Development, yesterday, at the conference centre of the Nigeria Union of Journalists (NUJ), Moscow Road, Port Harcourt.
He cautioned against lukewarm attitude to duties by civil servants, pointing out that job performance, discipline and total compliance to ethical rule will not be compromised under his watch as head of service.
Godwins frowned at a situation where civil servants trivialize their duties and engage in gross misconduct such as truancy and other unethical conducts, stating that the government will not fail to wield the big stick on such persons.
The head of service, who described training and retraining as a catalyst of enhancing efficiency in civil service, commended the Nigerian Institute of Training and Development (NITAD) for the initiative, and urged the participants to take advantage of the training to enhance their capabilities.
He tasked the institute to be vigilant in checking quackery in service delivery both in the public and private sectors of the economy.
In her opening remarks, Chairman, Rivers/Bayelsa Chapter of NITAD, Mrs Osundu Nkem Jaja, thanked the Rivers State Head of Service for mobilising key personnel in the Rivers State Civil Service to attend the training.
She said the body, in-charge of the regulation of training in both the public and private sectors, was relatively new in the state, and called for support from stakeholders to enable the body discharge its duties effectively.
Jaja lamented the absence of Rivers State and the entire South-South, South-East zones in the mainstream leadership of professional bodies, stating that such lapses have resulted in agitations and marginalisation.
She called on Rivers people to brace up and play active roles in professional organisations at the national level to enhance productivity in the state’s economy.
Delivering his lecture, the guest speaker, Mr. Kolawole Sampson Oladapo, identified training as a motivating factor in the development of any organisation.
Oladapo, cautioned against hoarding of knowledge and emphasised the need for knowledge acquisition and the application of newly-acquired skills on the job by employees of any organization.
The guest speaker, who spoke on the topic; “Learning and Development: Catalyst for Enhancing Human Resources Productivity,” listed the benefits of training to include enhanced service delivery, customer satisfaction, strong intellectual capital, knowledge transfer and achievement of organisational goal.
The participants at the training includes, officials of the Industrial Training Fund (ITF), Permanent Secretaries, directors and heads of ministries, departments and parastatals, among others.