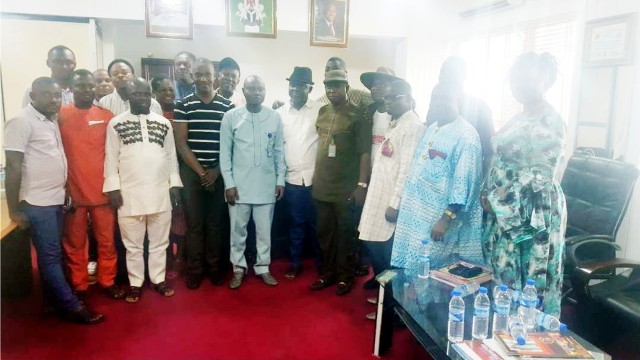 Permanent Secretary, Rivers State Ministry of Sports, Sir Michael Nnodi has said that the state government would assist the seven-man team that will represent Nigeria in the World Scramble Championship in Kenya in November this year.
He stated that the governor of the state, Chief Nyesom Wike is a sports loving person that has special interest in the development of sports, especially, at the grassroots.
Nnodi made the remarks when he received the World Scrabble Champion, Wellington Jighere, a Nigerian from Delta State and his team, on Friday, in his office, in Port Harcourt.
According to him, the state would definitely assist within her limited resources to ensure that Nigeria defends the title.
“On behalf of Rivers State government, I congratulate you in your various achievements, most especially for making the country proud.  To emerge as world champion in a highly educative game is commendable.
We will definitely assist you to attend the world championship,” Nnodi said.
The selected scrabble players to represent Nigeria at the forthcoming World Scrabble Championship billed to hold in Kenya, November this year have been in intensive one week camping in the state.
Speaking, the state Director of Sports, Joshua J. Kio, expressed worries that the coach had not groomed much Rivers State indigenes, but said he was motivated by their multiple achievements.
“I expected more Rivers State players to be in the team, however I am motivated by your multiple achievements. I urged the team to put more effort and commitment because it is not easy to defend a title”, Kio stated.
Earlier, the leader of the delegation, Prince A. Ikolo, who also doubled as the national and Rivers State Scramble Coach appealed to the state government for financial assistance to enable them attend the world championship. Ikolo explained that the players were poised to win the title back to back, as to make history.
“We are going to Kenya to win the title back to back, besides, the seven days camp in Port Harcourt has been so successful”, Ikolo added.
Also speaking at the occasion, the World Scramble Champion, Wellington Jighere further appealed to the state government to help the team in any little way they could to enable them go for the competition.

Who are the early favorites to win the NFL rushing title?

Rivers Hoopers Back To Winning Ways