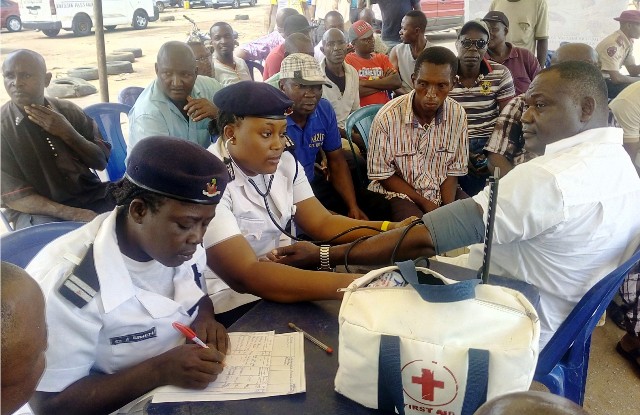 The Wife of Ebonyi  State Governor, Mrs Racheal Umahi, has called for the arrest of a policewoman who allegedly poured hot water on her 15-year-old house-help for wrongfully  applying condiments in a pot of soup.
Umahi made the call  after officials from her office and the State Ministry of Women Affairs and Social Development rescued the girl from the policewoman at her home in Mile 50, Abakaliki.
The Chief Press Secretary to Umahi, Mr Donatus Owo, said in a statement in Abakaliki on Saturday that the she was touched by the fact that girl’s body looked irritable because she was not given proper medical care.
“The matter has been reported to the police while the victim was taken to Police Clinic for medical treatment,” she said.
The victim, Chinyere Igwe, who hails from Igbere in Bende Local Government Area of Abia, said she had lived with the policewoman for two years within which she suffered various forms of maltreatment.
Igwe said she was preparing  soup on that fateful day when her employer  got annoyed that she did not prepare the soup according to her instruction.
“Only my mother is alive and I have been living with my madam for over two years now. This is as a result of my father’s death coupled with my mother’s financial handicap.
” I failed to follow her instruction and in anger she came out and carried the pot of soup together with the egusi (melon) and threw at me and it landed on my back.
“She also carried iron and hit me on my body and ordered me to bend  down and raise my leg up but I refused because my back was paining me seriously.
“She locked me up in a room while she went to boil water to pour on me.
“I pleaded with her to have mercy on me but she went inside and brought teargas, then I started crying when she rushed to get hot water and poured on me,” Igwe said.
The victim said that Mr Kingley Okochi, the husband of the suspect,  also hit her after the wife complained to him about the incident.
“Her husband also beat me up, but he was not aware that I had such injury because it was in the night.  He later apologised and asked his wife to use honey to treat my back,” Igwe said.
The suspect, Mrs Joy Okochi, however, claimed when the team from Government House, Abakaliki, came to her apartment that she did not pour hot water on the girl intentionally.
The Director of Child Welfare Development in the State Ministry of Women Affairs, Mr Godwin Igwe, and the State Chairman of International Federation of Women Lawyers, Miss Olivia Okpaleke, said the culprit must face justice.
Meanwhile, the Police Public Relations Officer in Ebonyi,  Mr Jude Madu,  said he had not  received the report.