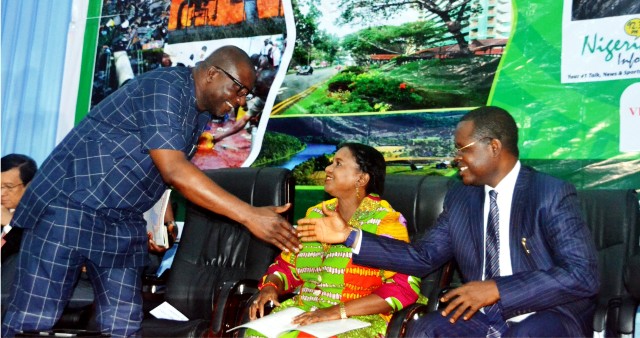 Rivers State Governor, Chief Nyesom Wike has declared that Rivers people are insisting on true federalism because they crave a country where all federating units are allowed to develop in line with their respective potentials and resources.
The governor emphasised that the demand for true federalism simply means that Rivers people believe in a united Nigeria, where no section is denied the control of her resources.
The governor who spoke at the Government House Port Harcourt on Tuesday night when the Rivers State Government hosted the Ambassador of the United States of America to Nigeria, Mr William Symington to a State Banquet, also called on the Government of the United States of America to set up a Visa Office in Port Harcourt to cater for the South-South and South-East.
He said: “We are clamouring for true federalism.  When you talk true federalism, they think you don’t want to  be part of the  country. We talk about true federalism as practiced in America.  A true presidential system where all the Federating units will be allowed to enjoy their resources and contribute to the centre.
“That means we believe that there must be a country called Nigeria.  All of us will work together for the unity of the  country”.
He explained  that Rivers people  seek equity, fairness and justice in the country, stating that the right framework  must be established  to ensure that all states excel at their pace.
On the  request for the United States Government to set up a Visa Office in Port Harcourt, Governor Wike said the visa would resolve  the issue of equity  and justice as the Abuja office serves the north and Lagos office serves the South West.
He assured the American Ambassador that  the state “is safe for business,” pledging that his administration will partner with investors, as the right environment  has already been created.
“Forget about the media propaganda.  This state is an opposition state . Therefore, don’t expect them to say it is the best.  But, we are the best state. We are doing  everything to ensure that investors  do profitable business under the ambit of the law”, Governor Wike said.
In his remarks, the Ambassador of the United States of America to Nigeria, Mr William Symington commended Nigerians for the unity of the country.
He said that Nigeria is a great country because of the contributions of Nigerians.
“Nigeria will be great and I expect a super power and a super partner “, he said.
The Ambassador of the United States of America to Nigeria  was accompanied by the Consul General , John Bray.
Head of Service of Rivers State, Mr Rufus Godwins, in a welcome remark on behalf of the Rivers State Government, pointed out that Rivers State shared a lot of similarities  with  the  United States of America, especially in the area of the presence of oil resources, love of human rights, justice and fair play.