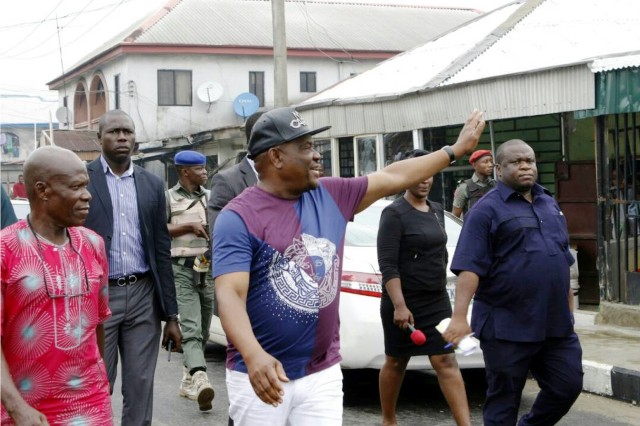 The Rivers State Government has reiterated its commitment to promote peace and security of all residents of the state.
The state Governor, Chief Nyesom Wike, stated this during the swearing-in ceremony of the new Country President of the United Nations Positive Livelihood Award Centre (UNPOLAC), Dr. Priscilla Somieari Charles Bassey, in Port Harcourt, at the weekend.
The governor, who spoke through his Deputy, Dr Ipalibo Harry Banigo, said the theme of the lecture, “Building Peace and Curbing Restiveness for National Development”, was apt because Nigeria is yearning for peace and national development.
He expressed gratitude for the Mayor of Peace Award conferred on him by the United Nations POLAC Peace Programme, stating that he had earlier received an award as an Ambassador of Peace.
Wike, who reiterated his commitment to passionately pursue peace at all times, said as part of deliberate efforts to promote peace, his administration extended an olive branch to ex-militants through an amnesty programme where about 22, 000 repentant cultists surrendered their weapons voluntarily without receiving any money because their mind set has been changed to realise they have a brighter future.
He said some people did not expect it to happen, and tried to discourage him but he doggedly went for it, and recorded a huge success.
“This administration will continue to further peace, develop peace, run after peace, think peace, talk peace, and walk with others for peace,” he stressed.
According to him, the State Boundary Commission has been able to tackle and peacefully resolve several issues involving the communities which previously had been left unresolved for several years.
He congratulated Bishop Pricilla Somieari Bassey, who is a Rivers indigene and the first female president of UNPOLAC in Nigeria, and expressed government’s readiness to support and partner with the organization.
In her remarks, the chairman of the occasion, Hajia Raheemat Omoro Momodu, who is the pioneer ECOWAS Representative to the African Union, commended Governor Nyesom Wike, whom she described as her favourite governor, for his developmental strides in the state.
Momodu said the time has come for Nigerians to make concerted efforts to promote peace and unity in the country by taking actions to prevent conflicts.
She identified nepotism as one of the highest, most wicked, most criminal and evil form of corruption.
“You may not realize the dangers nepotism poses but when you feel the impact, you will realize that nepotism can actually legitimize corruption,” she said.
Earlier, the Director General, UN-POLAC, Dr. Halo Eton, said UN-POLAC was an international autonomous institution with the UN and UNESCO, adding that POLAC has the promotion of peace as its mandate.
He said making of peace every time, the creation of peaceful environment everywhere and always ensuring that people live in peace wherever they find themselves, were the responsibilities of UN-POLAC.
Rev Emmanuel Ojukwu and Barrister Innocent Ekwu presented keynote addresses advocating for peace in the society.