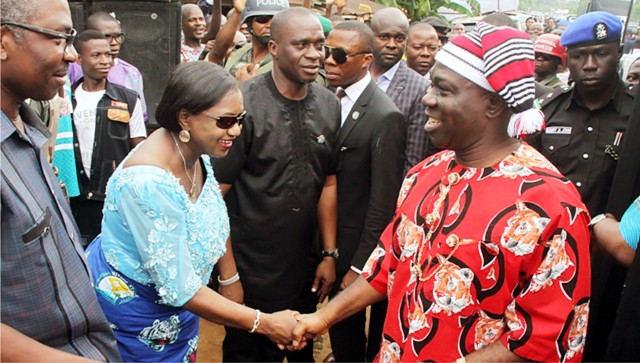 The Rivers State Governor,Chief Nyesom Wike may not campaign much during his re- election bid in 2019 following his achievements in developing the state.
The President-General of the Grassroots Development Initiative Worldwide (GDI), Hon Bright Amaewhule, who stated this when members of the GDI lecturers in Rivers State College of Health, Science and Technology, Oro-Owo, Rumueme, visited him in his office last Wednesday, urged all members of the group not to relent in supporting the current administration in the state.
“Governor Wike’s performance in two years has  gone far to speak and campaign for his re-election in 2019. We are not surprised because he has been tested and proven to be worthy leader in other elective and appointed positions he had occupied.
“We are not expecting to campaign much, the work he has done will do the magic in 2019 Governorship elections’’, he said.
He warned that Rivers State cannot afford to go back to the hands of people who cannot develop the state,  assuring that this government would do all it takes to bring the state to a limelight.
Amaewhule recalled that GDI,  as a pressure group, worked for the installation of the present administration in the state because of Wike’s vision to move the state forward, assuring that the group would continue to work and support government efforts to further develop the state through purposeful and visionary leadership in the state.
He stated that GDI promotes the vision and aspirations of members the group  anywhere they found themselves, adding that he was not surprised  that the group was coming to felicitate  with the national officers.
According to him,  “ I am not surprised that leaders and members of the group did not only come to felicitate with the group but have shown that they worked and are ready to continue to work for the group”.
Amaewhule urged the coordinator to see how the message of GDI would be spread to other tertiary institutions in the state, urging the Deputy Provost to link up with  staff and lecturers in other tertiary institutions in the state.
He also urged the lecturers to fall back to their various schools and homes to educate the people to participate and register in the ongoing Independent National Electoral Commission ( INEC) registration exercise, explaining that if people get their voters’ card and come out and vote during elections, no matter the  intimidations and harassments, it would not work for those who are planning to rig in the forth coming general elections.
He, however, urged the people to ensure that their votes speak for them during the 2019 election, maintaining that Governor Wike is ready to carry everybody along.
Earlier, the leader of the delegation who also the Deputy Provost of the College,Dr.Chime Onumbu, said the visit was to felicitate with the GDI and the Governor of Rivers State over the successful completion of the Golden Jubilee celebration of the state.
Onumbu also commended the Governor for his sterling leadership qualities saying: through his developmental strides in the state,  Governor Nyesom Wike has proved the great truism that GDI members are all great leaders.
‘’ We the GDI members in the College of Health Science and Technology are readily at his service for any appointments to assist fulfill GDI objectives and the  vision of the New Rivers State’’, he said.