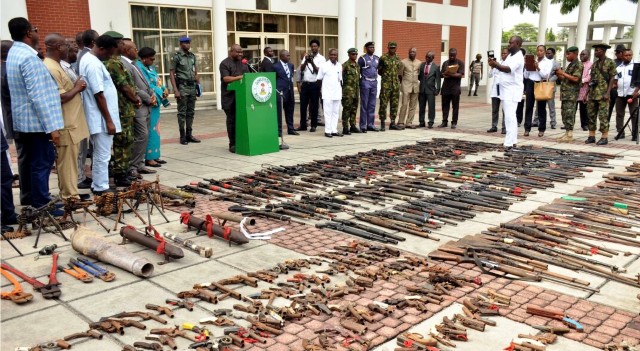 The Rivers State Governor, Chief Nyesom Wike, has said that the state’s amnesty programme witnessed 22, 430 repentant cultists surrender 911 assorted arms to the amnesty committee.
Wike dropped the hint, last Monday, at a Town Hall meeting and accountability forum to mark his administration’s second year anniversary in Port Harcourt.
He stated that the amnesty programme had reduced cult-related violence and other criminal activities in the state.
The governor noted that the programme had also resulted in surrendering 7,661 assorted ammunitions and 147 explosives by the repentant cultists.
Wike stressed that his administration had provided over 150 patrol vans to the security agencies to fight crime in the state.
He said that the state government had also handed over some gun boats to the Nigerian Navy in a bid to patrol and protect the Rivers waterways.
The governor stated that his administration had, in the last two years, made unprecedented investments in infrastructure, which had led to economic boom in the state.
Wike noted that 13 general hospitals in 13 local government areas were undergoing reconstruction with the completed ones awaiting furnishing and inauguration.
‘’We are also completing the regional hospitals started by the immediate past administration, located in Etche and Degema councils to serve as referral centres for secondary and tertiary health care,‘’ he added.
He said that his government had released over $4million to equip and maintain the Braithwaite Memorial Specialist Hospital (BMSH) to international standard.
Wike stated that the gesture was to enable it serve as the teaching hospital for the Rivers State University Medical School, pending the construction of its permanent site.
He noted that moribund businesses were gradually re-opening in the state, while fresh local and foreign businesses were being attracted to the state.
The governor disclosed that his administration had cancelled multiple taxation policy in order to enable business to thrive to the benefit of the people and to attract more investors.
“We are also supporting the growth of indigenous entrepreneurs through contracts as well as encouraging small and micro-enterprises with financial support to revitalize local economies,‘’ he added.
Wike said that in the last two years, his administration had invested over N145billion on the construction of roads, bridges, pedestrian walkways and underground drainage systems.
“As we speak, several road construction works are either underway or completed in Port Harcourt, Obio/Akpor, Abua/Odual, Ahoada East, Ahoada West, Akuku Toru.
‘’Also in Degema, Etche, Andoni, Opobo/Nkoro, Ikwerre, Emohua, Khana, Gokana, Okrika, Ogba/Egbema/Ndoni, Oyigbo, and Tai local government areas of the state,” he said.
The governor pointed out that his administration was improving the quality of education by creating enabling environment for the system to produce graduates with skills and knowledge to drive development.
He noted that 300 primary schools were being refurbished and equipped across the state, while infrastructure at the Rivers State University was being upgraded to ensure successful accreditation of courses.
The governor said that the state government had reconstructed major secondary schools in the three senatorial districts to re-introduce boarding education.
Wike advocated for fiscal federalism in Nigeria where every state could have complete control of its resources and develop at its own pace.
“We must find ways to forgive one another, open avenues of co-operation and join hands together, defeat the smacks of poverty and inequality in our society,” he said.
The Chairman of the occasion and former Chief Judge of Rivers State, Justice Iche Ndu, hailed Wike for his developmental strides.
Also speaking, the Secretary to the State Government, Kenneth Kobani, said the Wike administration had made giant developmental strides in the last two years.
Highlight of the occasion was passing of vote of confidence on Wike by the people of Rivers State.