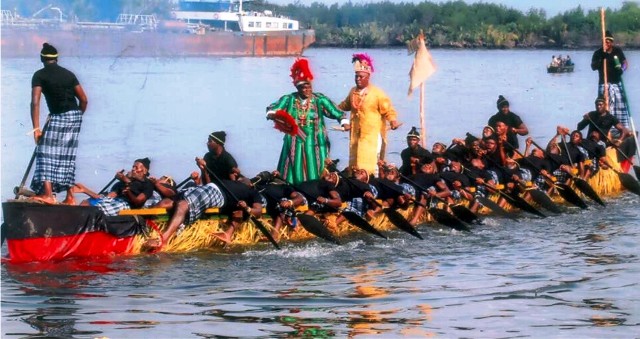 Okrika Local Government Area, of Rivers State, has emerged winners of the best performed War Canoe event, in the boat regatta competition.
The boat regatta competition is one of the activities marking Rivers State Golden Jubilee celebration held at Port Harcourt Tourist Beach, old Port Harcourt Township last Saturday.
Speaking shortly after the competition, the Chairman Caretaker Committee (CTC), Wilson D. Alabere, said the victory did not come to him as a surprise because Okrika is one of the richest in terms of cultural display in Nigeria.
However, he expressed joy over the victory and commended all those who contributed to the success of the local government area, saying that the success achieved is a collective effort by all Okrikans.
“Today as CTC Chairman in the area, I am very happy because it is remarkable that in my tenure as a chairman, I won Golden Jubilee competition,”  Alabere said
According to him, in War Canoe display, your boat came first is not important, because it is not a ceremonial gig or canoe race, but in War Canoe, what is significant is how you conform with traditional guidelines while going to war.
“If you look at the War Canoes critically, you will see that in other boats, there is nobody standing inside the boat leading the war. It is expected that the leader of the War Canoe must be at the front to lead while going to war, that is why you saw me standing in the boat representing the leader, hence am the chairman.
Besides, War canoes are prepared against enemies, so you should not be too fast and carefulness is required so that your enemies do not round you up, that is exactly what we did,” he stated.
The CTC Chairman lauded the state Governor, Chief Nyesom Wike, for initiating the golden jubilee celebration, saying that in spite the fact that the celebration is to mark when Rivers State was created, May 27, 1967, it further foster peace and unity in the state.
“I thank our governor ‘ “Mr Project” for initiating the golden jubilee celebration, it has actually brought peace, unity and love in the state.
“Apart from that the governor within two years in office has developed the state with laudable and people oriented projects, most especially in the areas of roads, housing, health and security,” he added.
Alabere used the opportunity to advise Rivers people and those doing business in the state to love one another in the true spirit of celebration.
In other event Akuku Toru local government area emerged winners of the ceremonial boat regatta, while Degema and Ogu- Bolo finished in second and third positions, respectively.