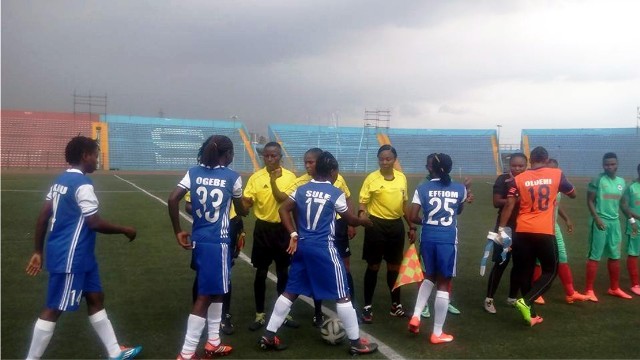 Head Coach of Rivers Angels FC of Port Harcourt Edwin Okon, has expressed satisfaction over the position of his team in their group, after the first round of the Nigeria Women Football League (NWFL).
Okon disclosed this Wednesday after a match day 7 derby of the 2016/2017 NWFL played at the Yakubu Gowon Stadium, Port Harcourt.
“I thank God for the end of the first round which saw Rivers Angels on the top of the group.
Bayelsa Queens are no push overs and they tried best. If not for the mistake from my goal keeper, we would have won 2-0 today”, Okon said.
Earlier, Bayelsa Queens head coach, Tarila Okorowanta, revealed that his team did not play to instruction and that cost them the game.
It was a good game, though we lost and I expected it to be like this because my team did not play to instruction”, the former Super Eagles player”, said.
“It was a disappointing game for me and good fight from Rivers Angels, we will meet again”, he added.
Meanwhile, the match ended in a 2-1 victory in favour of Rivers Angels. Alice Ogebe scored in each half to help Nigeria Women Football League (NWFL) Champions; Rivers Angels secure a hard taught 2-1 win over their arch rivals, Bayelsa Queens.
Ogebe had opened scoring in the 40th minute to hand the Jewel of Rivers a 1-0 lead before half time.
However, Bayelsa Queens responded in the second half following a mistake from goalkeeper, Tochukwu Oluechi who was delivering a quick service but had her shot hit Angels central back, Gladys Akpa and it fell in front of Yetunde Adebayejo who made no mistake to level terms in the 52nd minute.
The heavy down pour could not stop the visitors from pressurising the Edwin Okon-led side as they tried to get more goals but the defence line of the host prevented them from achieving their aim.
The former Super falcons after, Okon, made some strategic changes in the 57th and 58th minute as Cythia Aku replaced Radiat Sule while Glory Iroka came on for Cecilia Nku.
In the 67th minute, Alice Ogede, headed home from a brilliant delivery by Ugo Njoku to secure the much needed victory for the Port Harcourt side as they head for the NWFL break after six matches.
With the win, the Angels wrapped up the first round as group A leaders with 11 points and will be playing away to Bayelsa Queens when the league resumes on June 7 in Nembe.