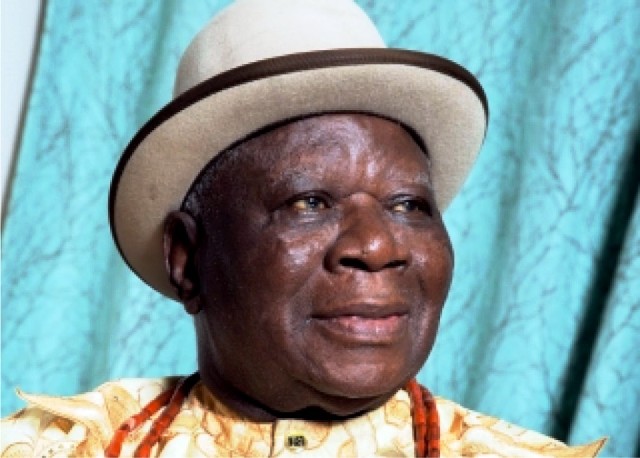 Ijaw leader, Chief Edwin Clark has berated former President, Chief Olusegun Obasanjo, over perceived disparaging comments against Ijaw nation, particularly former president, Dr Goodluck Jonathan, in “Against The Run Of Play,” a new book by former presidential spokesman, Olusegun Adeniyi.
In an open letter to Obasanjo, Clark also accused the book’s author of giving room to the former president to insult the Ijaw in perceived measure by Adeniyi to mend his strained relations with Obasanjo over “Some very unpalatable remarks about you (Obasanjo)” in the author’s earlier work, “Power, Politics and Death.”
Describing the book as a conspiracy between the author and Obasanjo to “incite other Nigerian leaders to disparage Ijaw leaders,” Clark said that Obasanjo had no justification to cast aspersions at others when he has several scandalous issues around him.
He told Obasanjo that, “in your narration in Adeniyi’s new book, there is nothing you said which you did not say in your false and self-aggrandised book containing assertions and character which you do not possess, yet you are assassinating the character and libelling patriotic and decent leaders and people of Nigeria, including innocent late President, Umaru  Yar’Adua and former President, Goodluck Jonathan.
“Jonathan was my candidate, and I have a right to campaign for him, and there was nothing that we said to infuriate or insult anyone as you are falsely and maliciously impressing on Nigerians.
“You said in Adeniyi’s book, that the late DSP Alamieyeseigha, former Governor of Bayelsa State, whom you hated and destroyed, had no reason to say that ‘there’s no vacancy in Aso Rock on May 21, 2013’, when he was campaigning for Jonathan.
“Whereas another PDP leader from Niger State, Governor Babangida Aliyu, also stated on September 18, 2014, that there was no vacancy in Aso Rock when he was addressing youth of Niger State, who wanted him to contest the Presidency. Whereas also in 2003, Chief Anthony Anenih, also declared that there was no vacancy in Aso Rock because you must be returned as President of Nigeria.
“The same Anenih told Atiku during his campaign for Jonathan in 2014, that there was no vacancy in Aso Rock in 2015. As Nigerians, we are free to campaign for any candidate we believe in whether he or she is from our ethnic nationality, from our zone, from our state or the same religion as us and or political party. This is the situation all over the world,” Clark said.
Clark described as hypocritical, Obasanjo’s reference in the new book to a number of reasons he rejected former President Jonathan’s candidature, including Jonathan’s refusal to respect zoning, non-performance, introduction of pipeline contracts, and perceived poor handling of Boko Haram menace.
“Isn’t it just hypocritical that you mentioned zoning as one of the areas where you hated Jonathan? You served Nigeria as a Head of State from 1976 to 1979 before you handed over to President Shehu Shagari. Then, you came back in 1999 and served Nigeria for eight years in two terms as an elected President. Again, you said you wanted a third term, and spent Nigerian money in lobbying for a third term.
“At that time, zoning did not occur to you. You are a hypocrite I say again, always wanting the downfall of others. You are a man who should not be believed by any Nigerian. You parade yourself all over the country and world as a saint and the best President Nigeria has ever had. What a fraudulent claim,” the Ijaw leader queried.