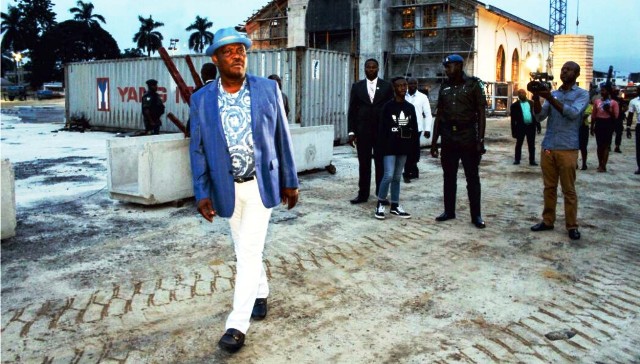 In fulfillment of the campaign promises of Governor Ben Ayade, the Cross River State Commissioner for Works, Engr. Dane Osim Asu, has embarked on an inspection of some road projects in the Central and Northern Senatorial Districts of the State.
Speaking at Boki East-West Road, the Commissioner noted that, the 27km road is a pet project of the Governor Ben Ayade-led administration, adding that the road is pre-historic and it links with Boje Bridge as well as other culvert and hills.
Hon. Osim- Asu disclosed that the project cost is N7.8 billion and the Ministry of Works has however, accepted to do it on direct labour for N3.1 billion. He pointed out that, there are three service providers that have identified interest to do the job and are already on site, maintaining that standard will not be compromised, as the project would be completed within five to seven months.
The Director of Civil, Engr. Godwin Akeke, said as a professional, there is no difficulty in the Boki-East-West Road stating that despite the fear of the people concerning the project, Government is well prepared for it.
According to him, the terrain may look difficult, but for a professional it as an easy project.
Engineer Akeke noted that the Governor is a man of action, when he gives directions, it must be carried out simultaneously, adding that, the Ministry of Works is determined to ensure that all materials used for the projects are certified for standard road construction.
The Director of Account, Ministry of Works, Mr. I. E. Egere said the project is highly commendable, noting that, he has seen practically where funds would be going to for the benefits of the State. He called on the Boki Community to rise up and support the State Government, as is an opportunity to build a better Cross River State and leave a legacy for the generation to come.
Earlier, the Commissioner also inspected the two kilometre Ishibori roads which spans from G.R.A and terminates at St. Thomas Primary School Ogoja, awarded to Messers Nig. Ltd. at 144m, informing that, it is a construction of urban renewal program aimed at providing access to Ogoja urban and expected to be completed within 3 months.
At Okuku Junction, the Director Civil gave details to the Commissioner of where the Mfon-Obanliku Road is expected to pass through. He noted that, the already existing road in Okuku needs expansion, adding that surveyors would work on the road which is also expected to link up with the Super Highway.
Speaking at Mfon Junction, Ogoja Local Government Area, the Commissioner charged the Sydney Construction Company to expedites action and ensure that the ongoing work he met on site continues speedily to achieve the expected result.
Hon. Osim-Asu commended the contractors on the high quality equipment he met on site and advised them to work hard and complete the project on or before 2018. He maintained that the government of Prof. Ben Ayade is passionate about the historical road and the welfare of the people, assuring that the project would be delivered on specifications.
Responding, the Community Chairman of Katabang, Boje ward in Boki Local Government Area, Mr. Mike Usang, Chief Martins Osang Women and Youths of Ogoja Local Government Area all commended Prof. Ben Ayade for the good gesture and pledged their support for him in 2019.