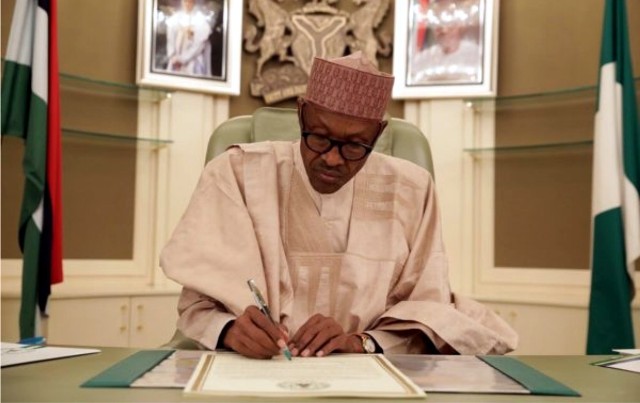 President Muhammadu Buhari is back on his desk at the Presidential Villa, Abuja, after he took some time off to rest.
He had a closed door meeting separately with the Minister of Justice and Attorney-General of the Federation, Abubakar Malami, and the Group Managing Director, Nigerian National Petroleum Corporation (NNPC), Maikanti Baru.
Malamii, who is a member of the presidential committee investigating suspended Secretary to the Government of the Federation (SGF), David Babachir Lawal, and the Director-General of the National Intelligence Agency (NIA), Ayo Oke, headed by Vice President Yemi Osinbajo, has hinted that the final report will be submitted, today.
He disclosed this to State House correspondents while answering questions after the meeting with the President.
He, however, refused to speak on whether the committee would yield to the calls of not making the report public, saying “it will be pre-emptive”.
The committee’s 14-day deadline ends, today.
Meanwhile, the Group Managing Director of the Nigerian National Petroleum Corporation, Dr. Maikanti Baru, yesterday, disclosed that oil production in the country has risen from 1.2 million barrels per day to two million.
Baru said this in an interview with State House correspondents after meeting behind closed doors with President Muhammadu Buhari at the Presidential Villa, Abuja.
He attributed the increase in oil production to the relative peace and stability being witnessed in the oil rich Niger Delta region.
He said he briefed the President on the activities of the NNPC and its subsidiaries.
Baru said his briefing always dwelt on fuel supply across the country, crude oil and gas productions and the ability of the corporation to supply gas to the power sector.
He said, “I briefed Mr. President on the state of the NNPC and its subsidiaries and also nationally to get him briefed on the situation of fuel supply, crude oil productions, gas production and by extension ability to supply gas to the power sector.
“We had an extensive briefing as you could see. I passed here over two hours. I spent quite some time with him to discuss these national issues.
“He was happy with the state of the corporation and told us to continue with the efforts that we are doing and if we need any executive attention, we should not hesitate to come back to him.”
When asked if there were plans to increase the prices of petroleum products, Baru said such decision was not under the purview of the NNPC.
In a related development, the Federal Government has reiterated its determination to stop the importation of Premium Motor Spirit otherwise known as petrol by 2019.
The Group Managing Director of the Nigeria National Petroleum Corporation, Dr. Maikanti Baru, disclosed this to newsmen on the sideline of the ongoing Offshore Technology Conference in Houston, Texas, United States.
Baru, who was represented at the conference by the Chief Operating Officer, Gas, and Power, Mr. Saidu Mohammed, said the feat was achievable.
He said that all the nation’s three refineries were producing petroleum products between five and six million litres of PMS daily.
“That is part of what is making the PMS market in Nigeria stable today, we believe that the set target of exiting PMS importation in 2019 is achievable.
“As a result lack of turnaround maintenance over the years, it will take more years to get the refineries fully back to their nameplate capacities.
“We will also bring in new refineries that will co-locate with existing ones, we are on course and I see us becoming a net exporter of products,” he said.
He said in line with its transformation agenda, the corporation was aligning its 12 Business Focus Areas with the Federal Government’s 7-Big Wins as championed by the Minister of State for Petroleum Resources, Dr. Emmanuel Ibe Kachikwu.
Baru had earlier told newsmen that the corporation’s power supply was the most reliable and the cheapest.