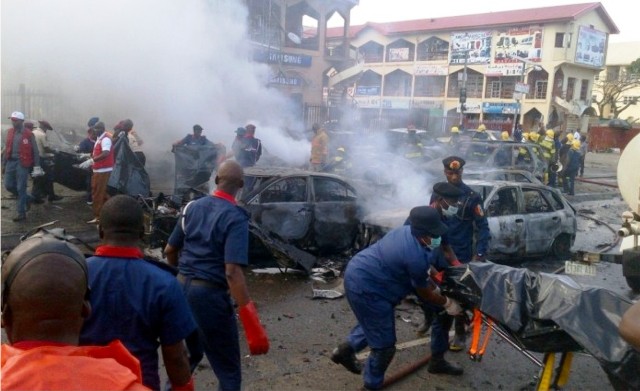 Adamawa
The Nigeria Security and Civil Defence Corps (NSCDC) in Adamawa State has arrested a suspected Boko Haram member, Amos Hassan.
Briefing newsmen last Wednesday in Yola, the State Commandant of the corps, Mr Aliyu Musa told newsmen that Hassan was arrested last Tuesday at the Federal Housing Estate in Bajabure area of Yola.
“He was arrested by our surveillance team and had made confessional statement that he had killed about 10 people since he joined the group,” Musa said.
He said that the suspect who had signs of healing bullet wounds was from Sambisa forest.
Responding to questions from newsmen, the 25-year-old Hassan said he came from Azare in Bauchi State.
The suspect said he was from Sambisa forest.

FCT
The Bangladesh’s Chief of Army Staff, Gen. Abu Shafiul Huq, said last Tuesday in Abuja that counter insurgency operation required more than the military approach.
Huq, who was in Nigeria on a five-day visit, shared the experience of his country at a presentation titled, “Counter Insurgency Operation: The Bangladesh Experience,’’ at the National Defence College (NDC).
He said apart from the military approach, political approach, as well as engagement of the people were also necessary tools to successfully counter insurgency.
Huq said those approaches were used to successfully counter insurgency in his country in the late 70s after it gained independence in 1971.
The Bangladesh’s army chief identified socio-economic, political and religious factors as some of the root causes of insurgency.

Kaduna
The Independent National Electoral Commission (INEC), says it is working hard to ensure that no eligible voter in the country disen defranchised during the 2019 general elections.
Resident Electoral Commissioner [REC] in Kaduna State,Alhaji Abdullahi Kaugama, gave the assurance last Tuesday in Kaduna while interacting with political parties and other election stakeholders on Continuous Voter Registration.
The REC said that the nationwide continuous voters registration was meant to capture all eligible voters ahead of the 2019 polls.
According to him, the exercise will be flagged-off in the state at Hunkuyi, Kudan Local Government,  yesterday and would subsequently commence in all INEC offices in the 23 local government areas of the state.
The exercise was for eligible residents of the state who did not register to vote in 2015 and those who attained the age of 18 years after the last general elections.

Kano
The National Drugs Law Enforcement Agency (NDLEA) has arrested two suspected drug traffickers who posed as police officers in Nasarawa area of Kano metropolis.
Kano State Commandant of NDLEA, Alhaji Hamza Umar, told newsmen in Kano last Tuesday that the suspects were arrested in a brand new escort vehicle with police colour, siren, pilot plate number and in possession of two police caps.
According to him, the suspects were arrested blaring the siren and pretending to be police officers while conveying 715 kilograms of Indian Hemp to Yobe.
Umar said “during investigation by our officers, we discovered that the suspects were from Edo State, while their destination was Gashua in Yobe State.
“The two suspects who were arrested along with 715 kilograms of Indian Hemp disclosed to us that they normally convey such exhibits once a month”.

Kwara
The Chairman, Baruten Local Council of  Kwara State, Mallam Musa  Buge, last Tuesday berated the Federal Government for neglecting the mining sector of the economy for too long.
Buge, in a telephone interview with newsmen, said that the government had  lost much revenues for its failure to explore the abundant mineral deposits in the country.
The council chief decried high rate of illegal mining operations in its boundary with the Republic of Benin.
According to him, Kaura village in the area has been a haven of high illegal mining operations.

Lagos
Lagos State Commissioner of Police, Mr Fatai Owoseni, last Tuesday presented Certificates of Commendation to the families of four policemen killed by militants in Ikorodu.
Owoseni also presented similar letters to the families of four policemen injured in Ikorodu by militants.
The commissioner presented undisclosed amount of money to the policemen for their gallantry, commitment and show of loyalty to their father’s land.
The dead officers include Insp. Godwin Iroagbalachi, Insp. Francis Pemi, Sgt. Mamuda Dembo and Sgt Idor Ekoro.
The injured officers are CSP Ejiofor Obiora, DPO of Owutu division that led other officers to the rescue mission, Sgt Orumoh Awhalawibue, Sgt Olatunji Gbadebo and Sgt Alexendrer Ugbadu, who was discharged from LUTH on Tuesday.
The Tide reports that four policemen, an Army Captain and a civilian were killed by militants on April 9, at about 2.30am, at Isawo area of Ikorodu, after responding to a distress call.
Owoseni said that the police recognized the efforts and supreme price the officers paid so that some people could obtain their freedom.

Nasarawa
The Nasarawa State Police command says it has arrested 113 persons suspected to have committed various offences in the past one month.
The Police Public Relations Officer, Mr Kennedy Idirisu, said last Monday in Lafia that the offences ranged from armed robbery, murder, kidnapping and cattle rustling.
Idirisu said that arms and ammunition, including four AK 49 and three AK 47 riffles, as well as 178 rounds of 7.65mm live ammunition were recovered from the suspects.
Other items recovered from the bandits included 500 rustled cows, 13 motorcycles and N8.9 million fake currency.
Idirisu attributed the feat to the operational strategies adopted by the command as well as the cooperation with other security agencies and community stakeholders.

Niger
The Independent National Electoral Commission (INEC) said last Tuesday that the Continuous Voters Registration beginning nationwide on April 27, would run till few months to the 2019 general elections.
The INEC’s Secretary in Niger State, Alhaji Aliyu Bungudu, made the disclosure at a one-day forum for election stakeholders held in Minna.
He said that the registration exercise was to ensure that no eligible voter was denied the right to elect leaders of their choice.
Bungudu assured the stakeholders that INEC would not shirk its responsibility in that regard, and urged them to mobilise the people to get registered.
“The voter registration exercise will continue at the local government levels when it commences, till few months to the conduct of 2019 general elections.
Ogun

The Independent National Electoral Commission (INEC) in Ogun State last Tuesday held a stakeholders’ forum to sensitize the residents on the voters registration exercise scheduled to commence nationwide on Thursday yesterday.’s Administrative Secretary in the state, Mr Kayode Oladimeji, said at the forum in Abeokuta that the exercise would hold in all the 20 local government areas in the state.
He said that the exercise, which would hold between 9a.m and 3 p.m on working days, would last “till a few days to the 2019 general elections”.
Oladimeji said distribution of already printed permanent voter cards would be carried out simultaneously during the period.

Osun
The Police in Osun State last Tuesday arrested four members of a suspected five-man kidnapping gang after engaging them in a gunfire in Erin-Osun in Irepodun Local Government Area of the state.
Presenting one of the suspects to newsmen in Osogbo, the Police Public Relations Officer, Mrs Folasade Odoro, said the suspects were arrested while on their way for a kidnapping operation last Tuesday.
Odoro said the police had been on the trail of the gang for a while before luck ran out of the hoodlums, as four out of the five members of the group were arrested by the police, while one of them escaped with gunshot wounds.
She said the kidnappers had been terrorising the people of the state.

Oyo
The Oyo State House Assembly has called on heads  of public schools in the  state to ensure  safety of the institutions’  properties, warning that  any student caught in  acts   of vandalism would be brought to book.
The warning followed a motion entitled, “Need to Stop the Gross Abuse of Public Properties in Oyo State,’’ presented during plenary last Tuesday.
The motion presented by the member representing Atiba State Constituency, Mr Genga Oyekola, was seconded by Mrs Wunmi Oladeji (LP-Ogbomoso North).
Oyekola, while presenting the motion, said the misuse of public properties had led to wastage of scarce resources and hindered socio-economic development.

Plateau
The Youth Initiative Against Violence and Human Rights Abuse (YIAVHA), an NGO, has urged the National Assembly (NASS) to speedily pass into law the “Not Too Young to Rrun” Bill.
The Executive Director of the organisation, Mr Pwakim Jacob, made the call in an interview with newsmen last Tuesday in Jos.
The “Not Too Young To Run” Bill, which seeks to give room for younger people to run for any elective position in the country, had passed second reading at the NASS.
According to Jacob, if given the chance to lead, the youth will drive the economic and political fortunes of Nigeria to the greatest height.