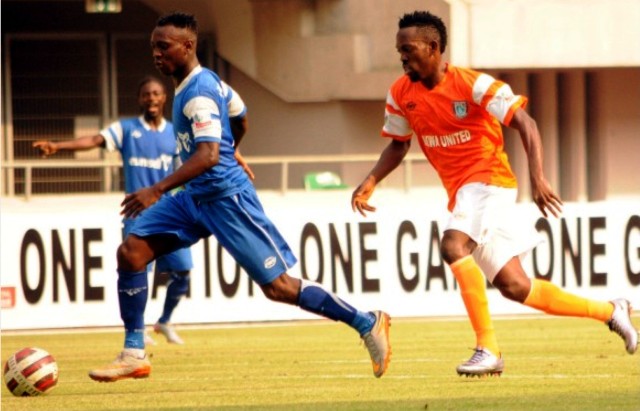 The group stage line-up for the 2017 CAF Confederation Cup is complete, with Nigeria’s Rivers United confirming their place at the weekend.
The Pride of Rivers drew 0-0 away to Rwanda’s Rayon Sports at the Amahoro Stadium in Kigali on Saturday, completing a 2-0 aggregate win in the playoff tie to still keep Nigeria’s flag in the continent.
The first leg in Port Harcourt penultimate weekend saw the Nigerians claim a victory thanks to goals from Emeka Atuloma and Guy Kuemian.
The Rivers-Rayon tie was offset by one week, with the other 15 ties completed one week earlier.
United join TP Mazembe, CS Sfaxien, Zesco United, FUS Rabat, Smouha, Recreativo Libolo, MC Alger, CF Mounana, Horoya, Platinum Stars, SuperSport United, Al-Hilal Al-Ubayyid, Mbabane Swallows, Club African and KCCA in the final 16.
The group stage draw will be conducted at CAF’s Cairo headquarters today April 26.
On Saturday, Rayon Sports were required to win 2-0 to take the tie into extra time or 3-0 to win it outright and advance the group stage but ‘Gikundiro’ met an immovable object in the shape of the ‘Pride of Rivers’.
United played with a man less for more than half an hour in the second half against a Rayon side back by a vociferous home crowd but grit, resolve and the never-say-die-Nigerian spirit was evident in the gladiatorial display which eventually proved to be the tide that carried Nigeria’s sole survivor to safety.
United withstood predictable early pressure from the hosts and nearly silenced the Amahoro by snatching a shock lead, albeit an own goal, by Rayon Sports in the 18th minute.
Rayon Sports head coach, Masoud Djuma was predictably downcast at full time but praised United as deserved winners of the tie.
“We lost to a better and more experienced side today and I want to say congratulations to Rivers United for their qualification,” Djuma declared.
Technical manager of Rivers United, Stanley Eguma also took the time to discuss his side’s progress to the group stage of the CAF Confederation Cup at the club’s first time of asking.
“It was a tough match but it was what we expected.
“We had a tactical plan and even after we had a man sent off, we did not panic.
“I am pleased that we were able to get the job done and qualify for the group stage of the competition,” he said.
Rivers United thus becomes the 16th and final side to qualify for the group stage of the 2017 Caf Confederation Cup and are the only Nigerian club still left in inter Caf club competition.