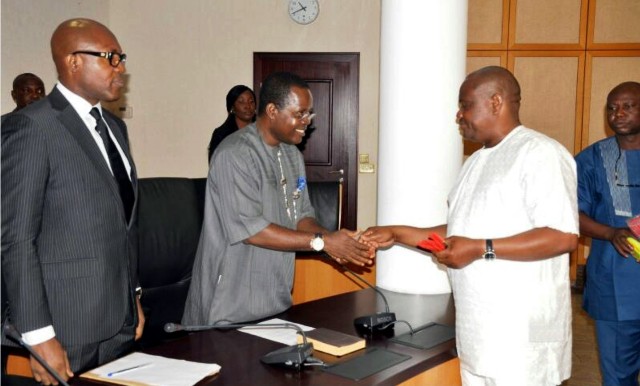 The Rivers Elders Consultative Council has expressed displeasure over comments on Governor Ezenwo Nyesom Wike by the defeated Governorship Candidate of the All Progressives Congress (APC), Dr. Dakuku Peterside and the State Chairman of the APC, Dr Davies  Ibiamu Ikanya
The Executive Secretary of the Council, Chief Granville  Abiye Georgewill, warned that  the elders will no longer condone any foul  words against  Governor Wike who according to them,  has brought respect and commendation to the state.
Georgewill, in a statement last Saturday,  said the elders of the state have commended the Governor for both in deeds and actions resulting in peaceful co-existence of all the ethnic nationalities in the state for which Rivers people are well pleased, but regretted that some members of the opposition party could call the Governor of the state names.
According to him,”The Governor has endeared himself to the people of Rivers state by his developmental strides for which Rivers people will ever remain grateful”.
” We find it therefore irresponsible and abominable for Dakuku Peterside, Davies Ikanya and of course the APC leadership in the state to, all the time engage in making unguarded and disrespectful comments on Governor Wike, Georgewill said.
He urged the APC and its leadership in the state to join hands with Governor Wike to improve the lots of Rivers people rather than engage in fruitless  efforts that would undevelope the state.
Georgewill warned that  Rivers people will no longer tolerate these  persons who, by their conducts, have already declared themselves persona non  grata, demanding unreserved apology from APC and its leadership.
He said  Peterside, Ikanya and Chris Finebone, all chieftains of the APC in Rivers State have been casting aspersions on Governor  Wike  through their  several press releases in the media, a development  which the elders of the state consider abominable, and not in the character of typical Rivers people.