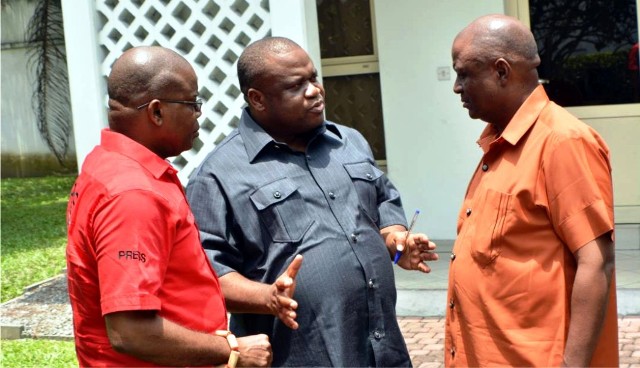 It was glitz and glamour at the Palace of Eze Ekpeye Logbo ll, His Majesty (Flt Lt.) Robinson O.Robinson,rtd, during the Chieftaincy coronation ceremony of former Caretaker Committee Chairman of Ahoada West  LGA, High Chief I kechukwu Obuzor and other prominent Ekpeye sons.
The ceremony which was performed by His Majesty, Eze Robinson O Robinson the Eze Ekpeye Logbo of Ekpeye Kingdom at his Palace in Odiereke Ubie, Ahoada  West  LGA of  Rivers State last weekend was witnessed by dignitaries from all walks of life .
The Chieftaincy title of Ikegah Ekpeye the second of Ekpeye Kingdom  meaning, the Right Hand of Ekpeye bestowed on High Chief Ikechukwu Obuzor was in recognition of his track record of service.
At the ceremony, the Eze Ekpeye Logbo said chieftaincy coronations are rare opportunities given to deserving sons and daughters of Ekpeye Kingdom who have distinguished themselves for the service of God and humanity.
Recall that High Chief Ikechukwu Obuzor had during his tenure as AWELGA Council boss demonstrated quality leadership through the provision of borehole water to many communities, free medical outreach, sanitation and security, including the building of a two bedroom apartment for an old widow who lost everything during the 2012 flood disaster.
Obuzor even after leaving office as council chairman continued this leadership prowess through Obuzor Vanguard by providing educational materials including school uniforms to indigent school children at the grassroots.”
This perhaps, may have informed the decision of Eze Ekpeye Logbo to confer on him the Chieftaincy title.
To the Ikegah Ekpeye the 2nd of Ekpeye Kingdom, Obuzor, the honour was unexpected but he is humbled by the singular honour done him.
According to the celebrant, the recognition will spur him on to do more by reaching out to disadvantaged people in the society particularly those in Ekpeye land.
He challenged youths of Ekpeye to be supportive of the Governor Nyesom Wike-led administration, describing the state chief executive as a great son in-law of the Ekpeye people with passion to transform the land through numerous projects sited in the area.
Obuzor challenged the youth to be positive in their thinking as there will be light at the end of the tunnel.
Other recipients at the ceremony included the Caretaker Committee Chairman of Ahoada East LGA, High Chief Justice Eke as the Akwana Ekpeye 1 of Ekpeye Kingdom; High Chief Eric Ishikaku, who was installed as the Eze Chime Ume Uma 1 of Ekpeye Kingdom; and High Chief Bernard Ebere, as the Eze Uyawe Okpeliya Ele 1 of Ekpeye Kingdom, among others.
At such occasion, traditional dance, goodwill messages and Canon shots were not in short supply.
At the reception in Odiokwu, the home town of High Chief Ikechukwu Obuzor, the people rolled out their drums to celebrate the man who has given his all for the betterment of the society.
Chief Obuzor was welcome to his community  after the ceremony by dancing elderly women, musical groups and youths who shot cannons at random

Eulogies As Paul Alozie Is Buried