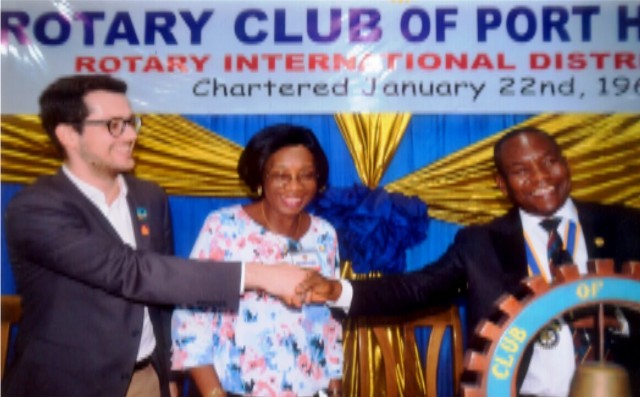 The Rivers State Governor, Chief Nyesom Wike says Easter period is a time that reminds people of the trauma Jesus Christ went through on the Cross of Calvary and assures mankind of his reconciliation with God.
The Governor who stated this as his Easter message at St Peter’s Anglican Church, Rumuepirikon near Port Harcourt, his country home on Sunday enjoined Rivers people to pray for the peace of the state and the leaders.
Wike urged Christians in the state to use the Easter period to pray fervently for the economic growth of the state, stressing the need for all to reconcile with God and humanity.
He noted that reconciliation among ourselves and God would enhance the success of the forthcoming Golden Jubilee Celebration beginning from May 27,2017, adding that the death of Jesus Christ re-unites man with God.
We must always be grateful to God, for giving us His only begotten son to die in our  place”, he said.
The governor expressed his dismay over the ingeniuneness  in the fight against corruption by the Federal Government, pointing out that corruption should be fought with unbiased mind and without fear or favour no matter who is involved.
He regretted that the fight is directed at members of the Peoples Democratic Party (PDP), which ought not to be, as it is expected to be all encompassing, irrespective of party or religions affiliation.
Wike urged the church to pray God to touch authorities in the Federal Government to return the N17.2 billion discovered by EFCC at Ikoyi in Lagos State to the coffers of the state, arguing that the issue must be handled with dispatch as evidence shows that the money is from Rivers State.
“Mr President is for the entire country, and as such, the Rivers State Government is not fighting Federal Government, but rather, some individuals want to bring in Mr President, just to divert attention but their plans will not work”, Wike said.
He hinted that the state government is starting up what he called ‘church fund’ in the state to help churches when they are in dire need of money to solve some church challenges, saying that the church funds would be carefully managed by very responsible and God fearing individuals.
Governor Wike told the leadership of St Peter’s Anglican Church, Rumuepirikom that the on-going projects at the Rumuepirikom Community would be supported by key stakeholders of the community, who accompanied him to the church.
Earlier, the Rector, Venerable Israel Omosioni had urged Christians to do all they can and leave the rest for God because as he puts it, “the stones in their lives have been rolled away by Jesus Christ’s death on the Cross of Calvary”.