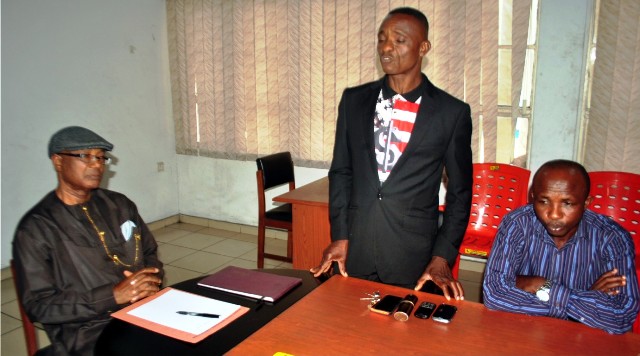 The General Manager, Rivers State Newspaper Corporation (RSNC), Publishers of The Tide Newspaper, Mr Vincent Ake has charged members of the Ministry of Information and Communications Chapter of the Nigeria Union of Journalists (NUJ) to show total commitment to duty wherever they find themselves.
Ake handed down the charge when the executive members of chapel paid him a courtesy visit at his office in Port Harcourt, yesterday.
He said it is only true commitment to duty, no matter how little the work may be, that would enable one to attain greater heights in life.
Ake urged them to be grateful to God for keeping them where they find themselves, urging them to be dedicated to their duties and see it as their personal work.
The General Manager cited an example of his humble beginning as a civil servant, in the ministry of Information and Communications, where he started as the Chapel’s Secretary and became the Vice Chairman and Chairman of the NUJ State Council and later National Deputy President and seeing himself today as General Manager of the Rivers State Newspaper Corporation.
He reminded them that as unionists, mannerism and proper articulations at meeting levels were important, adding that h is good mannerism, articulated speech and being a peace-builder spoke for him and earned him his present appointment even after retirement.
He added that humility should be their watchword as a step to achieving success in life, saying that “when you humble yourselves in your duty posts, you understand the job better and faster, and in future, you excel when the baton of leadership is given to you.”
He charged union members aspiring to higher positions to remain focused, adding that they need to understand the terrain and follow the direction of the pendulum, in order not to miss out.
Earlier, the chairman of the Chapel, Mr Okechukwu Maru had said that the news of the appointment of their former boss as General Manager of a widely read newspaper, The Tide, gladdened their hearts and gave them the hope that “if you work well, God will still use you even at retirement.”
Maru, also hinted that his executive comprising of himself as Chairman; Vice Chairman, ThankGod Nwaeke; Secretary, Ominini L. Wokoma; Treasurer, Princess Rose Amadi; Auditor, Alete Edna and Assistant Secretary, Okon Nodinim Florence has ensured members of the chapel now receive weigh-in allowances.
He added that it was made possible through the efforts of the commissioner for Information and Communications, Austin-Tam-George.
While thanking the team for the visit, the Director Production of the Corporation, Mr Dagogo Clinton urged them to uphold the ethics of journalism, in order to be on the front burner and charged them to always ensure that members given total support to the management to meet up their demands.