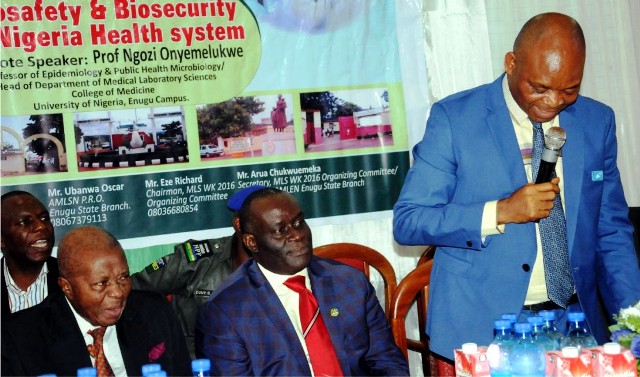 Activities at various courts in Enugu State were grounded last Monday, following an industrial action by the state branch of the Judiciary Staff Union of Nigeria (JUSUN).
A correspondent who monitored the strike, reports that members of staff, lawyers, litigants and awaiting trial inmates were locked out of court premises.
At the State High Court in Enugu, lawyers and litigants who came from all parts of the state and beyond were seen in clusters outside the court premises discussing.
It was same situation at the magistrates and customary courts in the state capital.
A staff of the state judiciary who would not want to be identified, said the strike was due to months of arrears of allowances owed them.
The staff said that, the leadership of the union had made efforts to resolve the impasse with the state government.
Mr Ndukwe Ogbuja, an Enugu-based lawyer, told journalists  that the situation was pathetic as there was no warning on the strike.
Ogbuja, said the situation would deny stakeholders their rights and justice, noting that, “we came this morning with litigants and were locked out by JUSUN.
“Even the prisoners and awaiting trial inmates that came here have been denied access to justice.
“But we have to place the two on the balance of justice to say the workers have to be listened to and their grievances be treated so that they can grant the justices that will be required.”
Mr Obiora Iloghalu, a lawyer, said many litigants were surprised that the gates were locked, adding that, “this is unfair.
“We are standing around here hopelessly with our clients. Everybody is standing, nobody knows the next line of action.
“In the same token, I am pleading with authorities that are supposed to listen to the workers to do something.”
Mr Miletus Eze, the Attorney-General of the state and Commissioner for Justice, described the action as an “embarrassment” to the state government.
Eze, refuted claims that the state government owed allowances to JUSUN members, adding that government did not deny them any allowances when they went on strike in 2015.
He said, “I just received the information less than 30 minutes ago that the courts are locked and government is embarrassed because in the first instance there is no labour dispute in the state with JUSUN.
“The issue is that the body of chief judges in Nigeria recommended a salary structure for JUSUN. That is not even a collective agreement.
“In spite of the fact that we are not bound by that recommendation, we started dialoguing with JUSUN leadership.”
He explained that, the state government had shown commitment in enhancing the salary of judicial workers and had even raised a committee to discuss with JUSUN.
The commissioner added that the joint committee set up by government to agree on salary review for JUSUN had yet to submit the recommendation to the state government.
He said that the action of JUSUN was uncalled for and ill-advised, noting that
the union had no right to issue ultimatum since the recommendation by the body of chief judges was not a collective bargain.
“There is a court order restraining them from going on strike in respect of that salary structure recommended by the body of chief judges of the states.
“It is a violation of the order of the National Industrial Court for them to proceed on strike in respect of that salary structure,” Eze said.