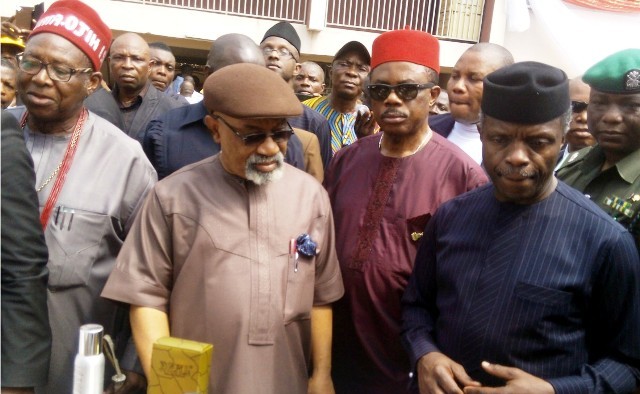 Gov. Ifeanyi Ugwuanyi of Enugu State last Friday appealed to the Federal Government to complete work at the permanent site of Enugu International Trade Fair Complex.
Ugwuanyi made the appeal while declaring open the 28th Enugu International Trade Fair in Enugu, saying there was dire need for infrastructural development at the trade fair ground, to bring it at par with the ones in Lagos and Kano.
‘We use this opportunity to call on the Federal Government to develop the infrastructure in this trade fair complex to be at par with its contemporaries in Lagos and Kano.
“Enugu is a regional capital; which makes it imperative that the Federal Government must give attention to the development of commerce and industry in this capital,’’ he said.
Ugwuanyi said the state government, through its economic investment summit held last year, heightened its investment drive for indigenous and foreign investors in the state.
“Enugu State has expanded its drive to attract investors in solid minerals, transport, agriculture, culture and tourism as well as Small and Medium Enterprises (SMEs),’’ he said.
The governor lauded the Enugu Chamber of Commerce, Industry, Mines and Agriculture (ECCIMA) for organising the fair and choosing a theme that reflected the current economic reality and the way forward.
Earlier, the Chairman of the occasion, the Deputy Senate President, Ike Ekweremadu, said that SMEs employed more than 85 per cent of the entire population and should be given the deserved attention.
Ekweremadu said that most Asian countries had their economic breakthroughs via SMEs growth and expansion, and Nigeria must borrow a leaf from them.
“I will laud the present administration for adopting former President Goodluck Jonathan’s Nigeria Industrial Revolution Plan (NIRP).
“I believe, if worked on and strengthened, the country will achieve tremendous SMEs and industrial growth,’’ he said.
The President of ECCIMA, Rev. Ugochukwu Chime, said this would be the 7th year of having the trade fair at the permanent site, acquired through the instrumentality of the Federal Ministry of Trade and Investment.
Chime said that adequate and robust arrangement had been made in the area of security, electricity supply and vehicular movement at the fair ground.
“With the arrangement we have on ground, this fair will be a huge success and I call on everyone living within the South East to pay a visit,’’ he said.
The 10-day fair, with the theme “Promoting Nigeria’s Industrial Sector and SMEs for Inclusive and Robust Economy’’ is to end on April 10.