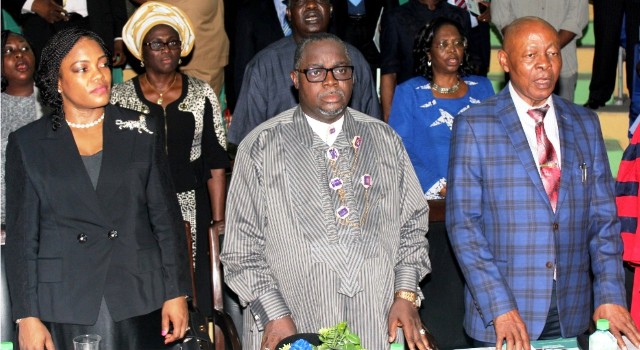 As reactions continue to greet the passage of the Electoral Act No. 6 2010 (Amendment) Bill 2017 into law last week by the National Assembly, the Chairman of the New Nigerian Peoples Party (NNPP) in Rivers State, Deacon Princewill Enyi says the development “is a plus to the National Assembly but minus to Nigerians”.
Enyi who was reacting to the recent passage of the bill by the National Assembly in Port Harcourt, said the Electronic Voting Act passage by the red chambers is just a trial Act on Nigerians.
According to him: “Until and unless the National Orientation Agency (NOA) does its duty of extensive, elaborate grassroots sensitisation of the citizenry on the issues accent by the presidency, efforts, resources yet to be expended on the programme may be a waste.
The Chairman of the Social Democratic Party in Rivers State, EngrJoshua Worlu described the passage of the Bill by the Senate as a bold, innovative and common sense step on Electoral Reforms designed to guarantee free, fair and credible elections in Nigeria.
Worlu commended the National Assembly, stating that it will reduce rigging and snatching of ballot boxes in the  next and subsequent elections in the state and the nation.
Also speaking, A legal practitioner and former Caretaker Committee Chairman of the Port Harcourt City Local Government Council, Barrister Clifford Oparaodu commended the National Assembly and  noted that the new law will return power to the people rather than to politicians who put themselves back to power and oppress the less privileged.
The chairman caretaker committee, Asari-Toru LGA, lauded the National Assembly for taking the bold step to amend the electoral Act, stressing that this has been one of the outstanding laws passed by the 8th Assembly.
The Tide learnt that if the presidency assent’s to the law, then there shall now be full biometric accreditation of voters with Smart Card Readers and/or other technological devices, as INEC may, from time to time, introduce for elections.
It also means that the Presiding Officers must now instantly transmit accreditation data and results from Polling Units to various collation centres. Presiding officer who contravenes this shall be imprisoned for at least 5 years (no option of fine).
While all Presiding Officers must now first record accreditation data and polling results on INEC’s prescribed forms before transmitting them, the data/result recorded must be the same as what they transmitted.
The Act, it was learnt, gives INEC unfettered powers to conduct elections by electronic voting and manual registers, INEC is now mandated to keep Electronic registers of voters.
It also empowers INEC to publish voters’ registers on its official website(s) for public scrutiny at least 30 days before a general election and any INEC staff who is responsible for this but fails to act as prescribed shall be liable on conviction to six months’ imprisonment.
Other things expected of INEC is to keep a National Electronic Register of Election Results as a distinct database or repository of polling unit by polling unit results for all elections conducted by INEC.
Collation of election result is now mainly electronic, as transmitted unit results will help to determine final results on real time basis and  INEC  mandated to record details of electoral materials – quantities, serial numbers used to conduct elections (for proper tracking).
A political party whose candidate dies after commencement of an election and before the declaration of the result of that election now has a 14-day window to conduct a fresh primary in order for INEC to conduct a fresh election within 21 days of the death of the party’s candidate;
Political parties’ Polling Agents are now entitled to inspect originals of electoral materials before commencement of election and any Presiding Officer who violates this provision of the law shall be imprisoned for at least1 year.
No political party can impose qualification/disqualification criteria, measures or conditions on any Nigerian for the purpose of nomination for elective offices, except as provided in the 1999 Constitution.
The election of a winner of an election can no longer be challenged on grounds of qualification, if the he (winner) satisfied the applicable requirements of sections 65, 106, 131 or 177 of the Constitution of the Federal Republic of Nigeria, 1999 (as amended) and he is not, as may be applicable, in breach of sections 66, 107, 137 or 182 of the Constitution of the Federal Republic of Nigeria, 1999. [For example, a person’s election cannot be challenged on the ground that he did not pay tax, as this is not a qualifying condition under the Constitution.]
All members of political parties are now eligible to determine the ad-hoc delegates to elect candidates of parties in indirect primaries. The capacity of party executives to unduly influence or rig party primaries has been reasonably curtailed, if not totally removed.
Parties can no longer impose arbitrary nomination fees on political aspirants. The Bill passed prescribes limits for each elective office as follows:
(a) One Hundred and Fifty Thousand Naira (N150,000) for a Ward Councillorship aspirant in the FCT;
(b) Two Hundred and Fifty Thousand Naira (N250,000) for an