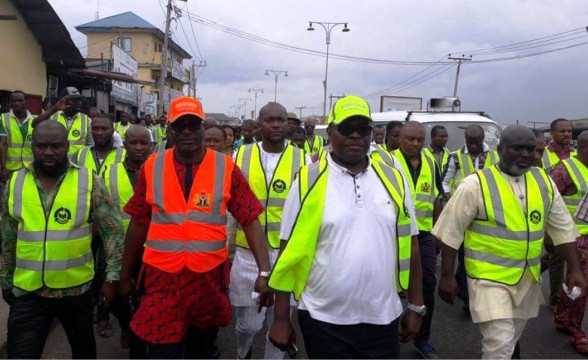 As the rainy season sets in, anxiety is mounting among residents of Port Harcourt city and its environs over the possible increase in flooding in the city, this year.
The Tide observed that during last week Wednesday’s heavy down pour, many parts of the city were flooded.
Among the heavily flooded areas were the MTN junction along the PH Aba Express road, Artillery Junction also along Port Harcourt Aba Express road and Elekahia, and Rumukalagbor.
Also affected by the flood during the rainfall were the popular Mile I Market to Emenike and  Elechi Road junctions by the Mile Three market all along the Ikwerre Road.
At the Elekahia,  Rumukalagbor villages, The Tide observed that many residents were displaced.
Residential buildings and shops were flooded and for shop owners, it was a sad day as most of their wares were destroyed by the flood waters  The Tide also observed that a private school located along the Hill Top Drive Elekahia was shut down and pupils evacuated that morning  as a result of the incidents.
A cross section of residents who spoke to The Tide on the situation blamed the flooding on the over flow of the two major adjoining streams which cut across the two communities.
They said that the streams known in the local language as Mini Jiriji and Mini Okoro had been sources of concern to the communities as they normally overflow their banks during heavy rainfall.
They said that until the streams were dredged to ensure the free flow of waters, the situation will get worst.
A shop owner, Mr Innocent Uwuma told The Tide that his shop was flooded early that morning and most of his wares had been destroyed.
Mr Uwuama said that the government must find solution to the problem of flooding in Elekahia and Rumukalagbor stressing that the only way to do this is to dredge the two streams.
“Let the government clean the streams, so that the water can flow into the bigger Rivers”.
Another trader, Kingsley Anosike who also claimed to have lost all his wares, further opined that the solution to the flooding in the areas lies in the dredging of the streams.
Mr Anosike recalled that last year, many traders in the area also lost their wares to the flood waters.
“Last year, we experienced the same thing we are appealing to the government to dredge the streams and make them deeper.
He said that if noting was done about the situation, that axis of Port Harcourt will be cut off from the rest of the city by flood.
Last year, we managed to survive the situation but this year I don’t know what is going to happen as subsequent rains seems to get heavier. Another resident, Mrs Ogechi Clement said that she had already removed all her belonging from her house.
She said that she suffered similar thing last year and called for assistance from the public.
The Tide observed that the situation caused gridlock along the Elekahia Rumukalagbor road as vehicles found it difficult to pass through the area.
Similar situation was also observed at the MTN junction, Aba road and the Mile I Market along Ikwerre Road.
At the market, traders were seen transferring food items to the median.
An environmentalist, Mr Steve Obodoekwe, said the situation was a sign that residents of Port Harcourt city and environs will experience more flooding as this year’s rains will be very heavy.
Mr Obodoekwe told The Tide that, the solution lies on regular desilting of the drains.
He called on the Ministry of Environment and the Rivers State Waste Management Agency (RIWAMA) to come up with modalities of ensuring that streams and rivers such as: the Interwoba  creek, Mini Jiriji and Mini  Okoro are regularly desilted to ensure their free flow.
He also suggested that residents who are in the habit of dumping refuse into these channels should desist from such act or face the full wrath of the law.
Also speaking on the issue, a Public Affairs analyst, Rev (Dr) Sokari Soberekon said that government must look for ways of channeling waters from the Mile I axis of Port Harcourt through Abonnema Wharf to the rivers there.
He said that the situation at Mile 1 Market portended great danger to the health of the society as most people buy most of their food stuff from Mile 1 market.  All in all, it is flood everywhere and the government  must find solution to it.

Group Alerts On Dangers Of Sand Dredging In Etche