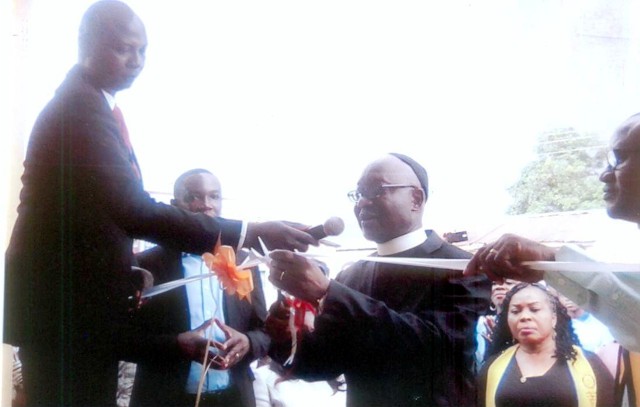 Ahead of the full commencement of the 2017 Senior Secondary School Certificate (SSSCE) and National Examination Council (NEC0), the Rivers State Government has distributed science equipment to a total of 238 public schools in the state.
Making the distribution to principals present at the State Secretariat, Commissioner for Education, Prof Kaniye Ebeku said the items included consumable chemicals, reagents and science equipments for the conduct of the 2017 SSCE and NECO examination.”
In addition to this, the commissioner said, the state Governor, Chief Nyesom Wike had also subsidised the registration of students for the examination in public schools.
“You will also recall that His Excellency, the Governor, has further graciously released a lot of money to serve as subsidy.
“Specially, N200,000 have been released per school for the registration of students in  public schools for the examinations.
Today, we are here to distribute the science equipment and also to hand over the subsidy of N200,000 per principal,” he said.
The implication of this, the commissioner explained, is that “parents have been relieved of a lot of financial burden regarding the examination, their wards and children are going to write shortly.
This also means that no principal is allowed to charge any extra money outside the official WAEC and NECO charges as approved and published by the relevant examination bodies,” he said.
He used the opportunity to urge the affected principals of the 238 pubic schools to adhere strictly to these directives, noting that any defaulter would be sanctioned appropriately.
“Let me warn the principals clearly. When you receive these goods, ensure that they are carefully conveyed to your schools, make sure they do not get missing on the way, make sure they are used properly for the purposes they had been acquired,” he warned.
While acknowledging that there could be defaulting principals, Prof. Ebeku stated unequivocally that “when we find them we will punish them adequately.”
In his response, the principal of Birabi Memorial Grammar School, Bori, Mr Mathew Lebadeya expressed appreciation over the development and lauded the Rivers State government for alleviating the economic burden of parents whose children are writing the SSCE by subsidising the registration fee of students in public schools.
“I think in the history of Rivers State, this is the first time we are experiencing this (equipment and N200,000 per school). We believe all the principals will utilise the equipment very well,” he said.