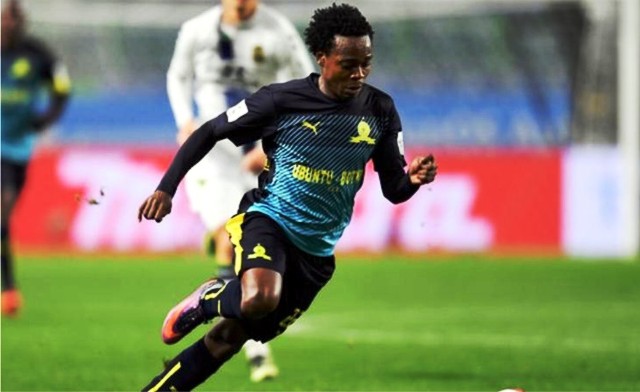 The African Champions League title-holders, Mamelodi Sundowns of South Africa, survived a scare in Kampala on Saturday as they drew 1-1 at KCCA to progress to the group phase of this year’s competition.
Sundowns went to Uganda leading 2-1 from penultimate weekend’s home leg, with the Kampala City outfit buoyed by their away goal.
It was KCCA who went ahead in the second leg of the last-32 tie, leaving the defending champions stunned.
Geoffrey Sserunkuma, who had scored in all three of Kampala City’s African Champions League games during this campaign, netted again after half an hour to make it 1-0 on the day and 2-2 on aggregate.
Crucially, because of their away-goal, that strike also meant that if the score stayed that way, KCCA would oust the holders and advance to the last sixteen.
However, the hosts’ fairy-tale run came to an end ten minutes from time when substitute Anthony Laffor of Liberia smashed the ball into the net to equalise and give Sundowns a 3-2 aggregate lead.
That was how the match ended, with Laffor later revealing what his coach Pitso Mosimane had urged him to do before coming off the bench.
“I’m happy to have been trusted to make the difference,” Laffor said on Sundowns’ official twitter feed.
“The coach said to me that I must get in the box and fight,” the Liberian added.
Elsewhere on Saturday, Bakry Al Madina scored a hat-trick as Al Merrikh of Sudan trounced Rivers United of Nigeria 4-0 to snatch a group place.
Merrikh qualified 4-3 on aggregate after a dramatic recovery from a three-goal first leg loss last weekend in the last-32 tie.
Experienced Al Madina opened the scoring after eight minutes in Omdurman and completed his hat-trick on the stroke of half-time.
USM Alger of Algeria, the 2015 runners-up, secured a group slot despite playing 65 minutes with 10 men in a 1-0 defeat by Rail Kadiogo in Burkina Faso.
Amir Sayoud, who scored in a 2-0 first leg win by USM, was sent off after two yellow cards and Mohamed Kahan scored the Kadiogo goal on 53 minutes.
Hopes of a Madagascar club reaching the group stage for the first time were dashed when CNaPS Sport were held 1-1 by Coton Sport of Cameroon in Antananarivo.
Coton took a 1-0 first leg lead and doubled their overall advantage when Souleymanou Moussa struck on the hour mark.
Zanaco of Zambia were another team to progress, although they could only draw 0-0 with Young Africans of Tanzania in Lusaka.
The Zambians won on away goals after drawing 1-1 in Dar es Salaam a week ago.
Another nine second legs were decided yesterday.

Go Round FC To Get N.5m For Win