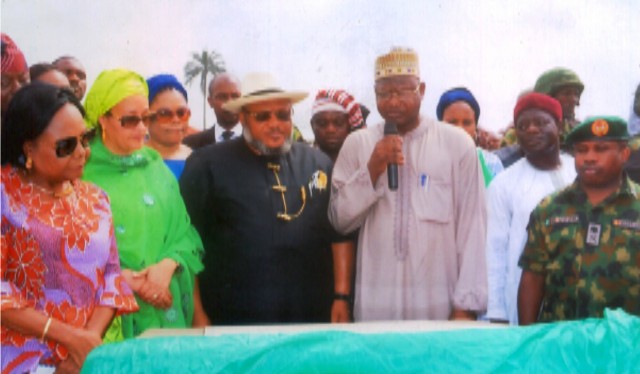 Rivers State Government has been told to check the activities of Reef Courts Company over its disturbing dredging  works.
The people of Okujagu Ama in Port Harcourt Local Government Area, made the  call when they paid a courtesy  call on the Special Adviser  to the Governor on Pollution Control, Sir Nwuke Anucha, recently in his office.
The  group which was led by Evans Okujagu, pointed out that the community was now faced with danger as a result of the  company’s dredging business.
They noted that the activity had so far, removed the top soil, thereby, exposing  them to natural disaster.
The community reasoned that if the state government and other relevant bodies did not take urgent steps, that sooner than later, the whole area would be wiped out.
According to them, fishing which is one of the major occupation is now  under great threat due to the actions of the company.
They explained that the company’s business had increased the depth of their rivers, which was not friendly  to fishermen.
They recalled that the activity  had been on since  2008, saying that farmers are also suffering the same fate.
Also speaking, another community leader,  Engr. Deinma Okujagu, blamed the company  over what he described as poor relationship with the community.
It was also learnt that the company and the state government had earlier planned  to do  shore  protection before  development  would be done in the  area.
However, the Governor’s Special Adviser  on Pollution, Nwuke Anucha, had promised to take  their matter to the appropriate  quarter for immediate  response.
Meanwhile, a community based pressure group in Rivers State, Etche   Peoples Liberation Congress (EPLC) has  said that the continuous dredging  of sand at the Otamiri River in Etche  Local  Government Area might lead to the sinking  of  four communities in the area.
The group which said  this in a briefing in Port Harcourt mentioned the Four affected communities as Chokocho, Egwi Umuanyanagu and Okomoko.
National President of the  group, Comrade Japhet  Ogbueri  told newsmen that, unless urgent steps were taken, the communities might soon  begin to feel the impacts of the dredging activities.
Comrade Ogbueri said that  apart from the communities, the Otamiri River is now being polluted.
“We are here to tell the world that four communities in Etche may  sink  any moment from now  and Etche only traditional River, Otamiri is completely   devastated by dredging activities.
He alleged that most of those involved in the dredging activities in the area, were doing it without regard to the environment, stressing that  no dredging companies  in the area could boast of an Environmental Impact Assessment  (EIA) Report.
Comrade Ogbueri further alleged that, efforts made so far  to ensure  that companies operating in the area complied with relevant environmental  rules and regulations had not yielded any result.
He however, warned  the companies  not to wait for the youths to take to the streets  before they  remedy the  situation.
According to him,  youths of Etche ethnic  nationality will no longer  fold  their  hands and watch  their environment being  destroyed  by dredging companies.
Comrade,  Ogbueri also appealed  to the Rivers State Government to intervene  in the matter by calling  on the companies to do the  right thing  in the overall interest of the people and the State.