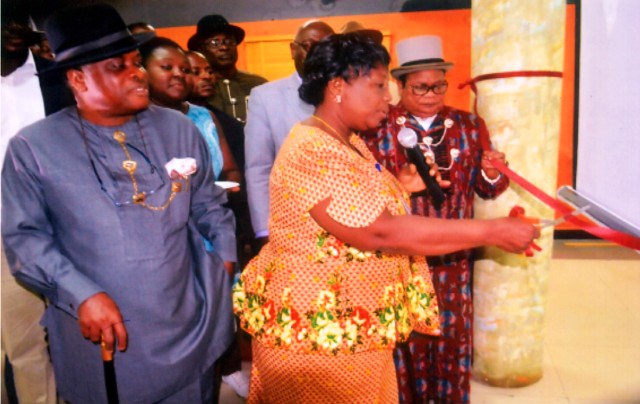 Dignitaries and personalities from all walks of life thronged the Chrisderah Hotel Stadium at Omoku, headquarters of Ogba/Egbema/Ndoni Local Government Area of Rivers State to pay their last respect to  the Late Bethel Obuah,  father of the chairman, Peoples Democratic Party (PDP), Rivers State Chapter at the weekend.
The dignitaries included, the wife of the State Governor Justice (Mrs) Suzette Eberechi Wike, the wife of the former President Goodluck Jonathan, Patience, the Deputy Governor of Rivers State, Dr. Ipalibo Banigo, former governors of the state, Dr. Sir Peter Odili and Sir Celestine Omehia.
Others were Edo State PDP chairman, members of National and State Houses of Assembly, the Oba of Ogbaland, Eze Chukumela Nam Obi II, Eze Robinson O. Robinson, Eze Ekpeye Logbo II, among others.
In his  funeral message, Pastor (Prof) L.G. Obara  reminded people  that  they  were living  an unsure   and temporary  life that could terminate at God’s  appointed time, saying “Life on earth is not forever. We must see life beyond what we see it today”.
Speaking on behalf of the bereaved family, Cyril  Obuah  expressed gratitude to all those who  attended  the burial ceremony of their father,  describing the huge crowd and personalities in attendance as unprecedented in  Ogbaland,  which he  attributed to the lifestyle  of Late Pa Bethel Obuah.
According  to him,  Bro Felix Obuah alias Go Round drew all his  inspirations from his father as a successful businessman and  fisherman, and  used the forum  to call on all and sundry to do everything they  can to ensure that lasting peace   returns to Omoku and Ogbaland in general.
Professor Sunday N. Okoroma on behalf  of Umuohali kindred  in Omoku, said they  were happy to have Bethel  Obuah  as their son and brother who by the  will  of God produced Felix Obuah (Go Round) who is making  them proud and  thanked  Governor Wike for giving him the opportunity to serve in his  administration.
Bro Felix  Obuah  while reading his Late Father’s biography  listed his attributes as a loving and caring  father  who will always  be remembered  by the family and thanked all  those who  supported to give him a befitting burial.

Intels, Eleme To Partner On Dev