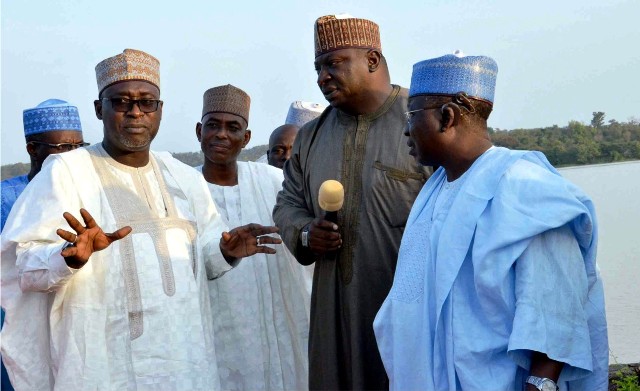 Bauchi
The Bauchi State Primary Healthcare Agency yesterday said it has begun the training of 240 primary healthcare workers on Integrated Management of Childhood Illnesses (IMCI) in four local government areas.
Officer-in-charge of the IMCI Unit, Hajiya Binta Ladan, made this known yesterday in an interview with newsmen in Bauchi.
Ladan listed the local governments as Bogoro, Jama’are, Ningi and Gambuwa.
She said that medical officers, nursing, midwives and community health workers would be part of the training.
“The personnel are to be trained on modern standard protocol of identification, classification and treatment of vaccine preventable diseases,’’ Ladan said.

FCT
The New Partnership for Africa’s Development (NEPAD) says it has earmarked 38 million euros for poverty eradication and empowerment in five countries.
The Chief Executive Officer, NEPAD Nigeria,  Mrs Gloria Akobundu, made this known at a two-day workshop organised by NEPAD, recently in Abuja.
Akobundu explained that 35 million euros would go for the empowerment programmes, while three million euros has been earmarked for the technical support interventions.
According to her, the three million euros technical interventions will be used in expansion of facilities and training centres and sensitisation and awareness on the programme.

Kwara
The Kwara State Government yesterday pledged to provide adequate surveillance at the International Cattle Market in Ilesha- Baruba in Baruten Local Government Area.
The town is also a border community between Nigeria and the Republic of Benin.
The State’s Commissioner for Agriculture and Natural Resources, Mr Bamidele Adegoke, said this in an interview with newsmen in Ilorin.
Adegoke added that the measure was to ensure immediate response to any outbreak of animal disease in the state.

Kano
The Senator representing Kano North Senatorial District, Alhaji Barau Jibril-Maliya, has called on the contractor handling the rehabilitation of Kano-Gwarzo-Dayi road to move to the site.
It would be recalled that the Federal Government had in November 2016 awarded the contract worth over N184 million for the rehabilitation of Kano-Gwarzo-Dayi road but the work is yet to commence.
He made the call in a telephone interview with newsmen yesterday in Kano.
He said there was urgent need for the contractor to move to site immediately since he had already been mobilised in addition to signing the agreement with the Federal Government.

The Inspector-General of Police, Mr Ibrahim Idris, has re-deployed Commissioner of Police Wilson Inalegwu to Kogi to take charge of the State Police Command.
Report has it that Inalegwu, who until his new posting was the Commissioner of Police in charge of Ekiti Command, assumed duty on Tuesday in Lokoja.
The new Kogi Commissioner swapped position with the out-going commissioner, Mr Abdullahi Ibrahim Chafe, who has been deployed to Ekiti Command.
Speaking at a brief handing over and taking over ceremony in Lokoja, the outgoing police commissioner said his period in Kogi witnessed relative peace with drastic reduction in crime rate compared to when he assumed duty in the state.
Chafe expressed gratitude to the inspector-general, Gov. Yahaya Bello, officers and men of the command, other security agencies and traditional rulers for his successful tenure in the state.
He also commended the people of the state as well as other stakeholders that supported the command in the fight against crimes during his service in the state.

Lagos
The South African Government has deported 97 Nigerians for committing various offences in the country.
The deportees landed at the Murtala Muhammed International Airport, Lagos on Monday night in a chartered aircraft with the registration number GBB710 from Johannesburg.
They were made up of 95 males and two females.
The Spokesman of the Lagos Airport Police Command, DSP Joseph Alabi, confirmed the development.
An immigration source told newsmen on condition of anonymity that six of the deportees were returned to the country for drug offences while 10 were arrested and deported for other criminal offences.
The others were said to have committed immigration offences in the Southern African country.

Niger
Bida Local Government Area of Niger State says it has earmarked N40 million for the construction of boreholes, culverts and rural primary health centres in the council 14 ward.
Chairman of the council, Mr Mohammadu Bagudu, disclosed this in an interview with newsmen in Bida last Tuesday.
He said that each of the councilors would present the projects from his constituency for execution.
The chairman further said that the local administration had conducted feasibility studies on where such projects would be sited.
He called on residents of the area to desist from dumping refuse on water ways, for the benefit of their health and also prevent flooding during rainy season.

Oyo
For allegedly  stealing his neighbour’s  two children, the police  on Tuesday  arraigned  a 39-year-old  farmer, Semiu Yusuf, in an  Iyaganku Chief Magistrates’  Court  in Ibadan.
It is reported that Yusuf of Maku Ogbere Idi, Osan, Ibadan, was arraigned on a two-count charge of conspiracy and enticing   children.
The Prosecutor, Insp Sunday Ogunremi, told the court that Yusuf and others at large conspired to steal the children.
Ogunremi said Yusuf, by the act, attempted to deny a woman, Kehinde  Kolapo,  of the care of two of her children aged  11 and five.
He told the court that Yusuf committed the offence on February 14 at about 2 pm at Ogbere Idi, Osan area of Ibadan.
“ Yusuf was a co – tenant with the mother of the children and claimed that he saw them somewhere in town when he was going somewhere on a motorcycle.

Osun
The Osun State Government last Tuesday presented retirement bond certificates worth N1.1billion to the fourth batch of retirees under the state contributory pension scheme.
The State governor, Mr Rauf Aregbesola, made the presentation through the State Head of Service, Mr Sunday Owoeye, at a seminar organised for workers.
The seminar was organised for them by Pension Fund Administrators to give them a better understanding of what pension schemes were all about.
Aregbesola said that 159 pensioners from the scheme would benefit from the bond, with 100 of the beneficiaries coming from Local Government Areas while the remaining 59 retired as primary school teachers.

Ogun
Former President Olusegun Obasanjo last Tuesday advised parents and community leaders to revive the culture of storytelling among children to enable them imbibe good morals.
Obasanjo gave the advice on Tuesday at a programme tagged, ”Story Time with Baba, held at his ancestral home at Ibogun in Ifo Local Government Area of Ogun.

Plateau
Sgt. Apollos Aliyu of ‘A’ Divisional Police Headquarters, Jos, has told a Jos High Court that Stephen Luka, who is standing trial over alleged culpable homicide, had confessed to the crime in a written statement.
Aliyu, the Investigating Police Officer (IPO) in the case, testified against the accused, who had since denied the allegations.
The accused person is facing a four-count charge of murder, attempted murder, assault and sexual abuse.
He was accused of attacking two sisters, Justina Dusu and Simi Dusu, on July 27, 2016 at his home in Sabon Gari, Tudun Wada, Jos, after they went to confront him over Justina’s pregnancy.

Sokoto
The Police in Sokoto State yesterday arraigned Francis Mbanugo, Emerie Uzochukwu, Sunday Ejeh and Emmanuel Ogbeauim, all of Mabera area of Sokoto, for allegedly stealing a motorcycle.
The Prosecutor, Sgt. Monday Kenneth, told the court that the accused persons conspired and stole a Haojue motorcycle belonging to Jonathan Ezekiel of the same area.
Kenneth said that the motorcycle, with registration number, TBW 787 UT, was parked inside the compound and the accused jointly conspired and stole it.
The accused persons were arraigned on a two-count charge of criminal conspiracy, contrary to Sections 97 and 288 of the Penal Code Law.