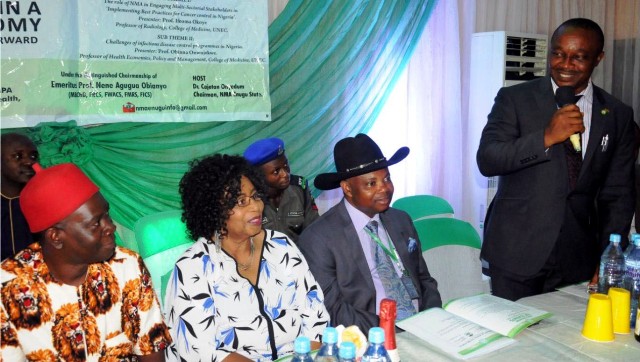 Retired civil servants in Abia State have described the process of verification of state pensioners as “cumbersome, unfriendly, rigorous, stressful and harmful” to their health.
The pensioners, some of whom are between the ages of 70 and 90, expressed the concern last Friday when they spoke with newsmen  in Umuahia.
The verification began last Monday.
They said that going through the process on daily basis had subjected them to exhaustion and other inconveniences with telling effect on their health.
Mr Christopher Onyemachi, 77, who said that the exercise was not properly organised, said that it should have been organised in batches to avoid the large crowd and the attendant stress.
According to him, the bank handling the exercise should have drawn up a schedule so that people who retired during a specific length of time could be verified in batches.
“They are using the verification to make us suffer.
“Why do they treat old men so unkindly? Is there no better way of doing the verification to save us the trouble we are passing through,” he asked .
An octogenarian pensioner, Mr Thomas Nwosu, also described his Friday’s experience during the exercise as the worst since the exercise began. Nwosu, who said that process was slow, further said that though he submitted his form on Monday; he could not get his serial number for his verification until Friday.
He expressed concern over the long queue that characterised the exercise adding he was not sure when it would get to his turn.
Also speaking, another pensioner, who identified himself simply as David, said that some of the retirees came from Port Harcourt, Owerri and Enugu for the exercise with the last money they had.
He said that many of them hoped that they would be paid at the venue of the exercise.
“Some of them had to beg for money to even buy sachet water and groundnut to keep life going at the venue of the exrcise,” David said.
David said that some retirees who had no transport fare to go back to their various destinations resorted to begging for assistance to accomplish the journey.
He further said that some retirees, earning as law as N1,000 pension monthly and could not cope with the rigours of the exercise stopped coming.
Mrs Ngozi Ukandu, 54, and another pensioner, who identified herself simply as Mrs Kalu, 57, said that pensioners were being ill-treated.
Ukandu said that it was sheer wickedness to treat men and women, who spent their productive ages in the service of the state in such a “callous manner.’’
She wondered why pensioners in their 70s and above should be made to suffer. The Chairman of the state chapter of the Nigeria Union of Pensioners(NUP), Chief Chukwuma Udensi, earlier in an interview with newsmen, estimated the gratuities of retired state and local government civil servants in the state at over N22 billion.
Speaking on the verification in a telephone interview, the Commissioner for Information and Strategy, Mr Bonny Iwuoha,said that the procedure was for the pensioners to physically present for verification.
Iwuoha said that the essence was to eliminate the names of dead and ghost pensioners in the roster of pensioners.
He said that government had observed some fictitious names after the biometric capturing was conducted for pensioners and teachers last year, a development he said necessitated the exercise.
Iwuoha, who is also a retiree, appealed to his fellow pensioners to exercise patience and show greater understanding with the state government to ensure the success of the exercise.